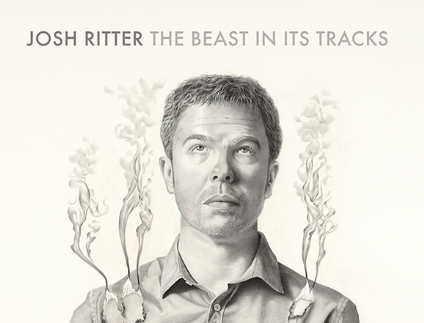 Josh Ritter
The Beast in its Tracks
Pytheas Recordings

When one of the best living songwriters gets divorced, it’s hard to know what to expect: Josh Ritter isn’t one for “angry, over-the-top, knee-jerk breakup songs,” as NPR puts it, but The Beast in its Tracks, out this week, is such a clean, joyful trip across the Americana landscape that you’d be forgiven for thinking that Ritter just got hitched to a new bride, wearing tweed. It’s a little deceiving—like if your best friend got dumped, showed up to your birthday party insisting that everything was just peachy, God damn it, and then wandered off into the woods with a handle of whiskey.

Don’t let that stop you from acquiring the album when it comes out on Tuesday. (NPR is streaming it in full, but don’t be lame; artists need to eat, too.) Ritter’s album convincingly recalls everyone from Bob Dylan to Bruce Springsteen to Paul Simon, and I already have at least three favorite songs looping on my stereo (“A Certain Light,” “New Lover,” and “Hopeful”).

Beast has much more in common with Ritter’s last EP, the stripped-down Bringing in the Darlings, than with his experimental full-length, So Runs the World Away, which was dominated by members of the terrific Royal City Band, Ritter’s backing band. The new album is all about lo-fi sound, driving guitar, and Ritter’s voice, with the occasional giddy instrumentation bursting through—such as the shaker-like percussion on “In Your Arms Awhile” or the haunting domestic kitchen sounds in “Appleblossom Rag.”

Ritter’s run-on lyrics fly off the page—as if he’s singing his feelings as he experiences them: “How many times did the truth that you take to be true, just truth falling apart at the same speed as you?” There’s not a clear relationship trajectory here; a “new lover” makes an appearance several times throughout the album, interspersed with longings and memories of a spouse. But despite the stream of consciousness, his songs have a heavy dose of distance and reflection: It’s all about the part of a breakup where you’re firmly on your way toward wishing your old lover well, smiling fondly about the good times, and hey, still throwing in a bitter jab or two when it suits you—”New Lover.”

But that’s the thing: Divorce sucks. My favorite breakup album of all time, The First Days of Spring by Noah and the Whale, wasn’t afraid to devastate the listener. It documented everything from 4 a.m. phone calls to the horror of sleeping with a stranger after a long-term relationship. And even Frightened Rabbit’s Pedestrian Verse, which came out last month, understood that when discussing this subject, it’s necessary to employ the word “fuck.” As a listener, I probably have no right to this kind of musical voyeurism, but if one of my favorite singers is writing about heartache, it’s hard not to demand it.

So my short take: Listen to The Beast in its Tracks if you need a beautiful album for a cross-country road trip with your new lover. But listen to Ritter’s 2007 throwback, “The Temptation of Adam,” if you’re all alone, and know that you’ll never, ever get over the old one.