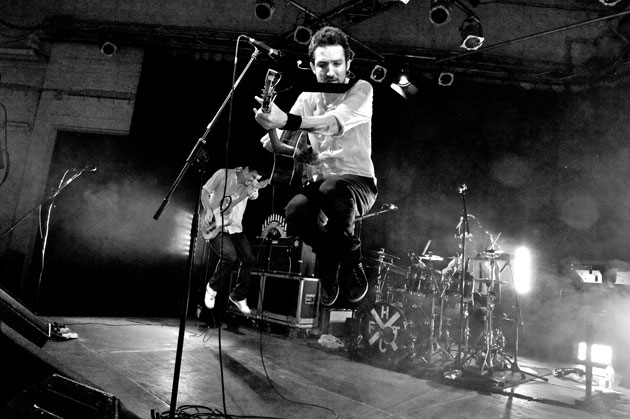 On a Friday afternoon in the dimly lit lobby of Oakland, California’s Fox Theater, I find Frank Turner, a rising star of the English punk-folk scene, bustling among stacks of cardboard boxes, pulling out t-shirts, consolidating CDs and vinyl, and noting the quantities on a piece of paper. In town for a two-night stand with the veteran SoCal punk band Social Distortion, Turner, an affable fellow clad in a black Ben Franklin t-shirt bearing the Black Flag logo, is accustomed to doing such things himself. After all, he’s been on the road almost nonstop for seven years—several of them solo but more recently backed by his superb band, the Sleeping Souls. Nowadays, he jokes, the only place he sleeps soundly is in his tiny berth on the tour bus.

After swapping stories of youthful arrests—me for talking back to an Oakland cop, him for participating in anarchist demos across the pond—we retire to his dressing room to chat. Turner came of age listening to bands like Black Flag and Minor Threat, not to mention the likes of Green Day and the Offspring, with whom he’s since played stadiums.

A charismatic performer who is sometimes compared to Billy Bragg, Bruce Springsteen, and his idol, Loudon Wainwright III, Turner would have had no trouble winning over the crowd of nearly 3,000 who showed up later, largely to see Social Distortion, though there were definitely people down in front singing along to his songs. Turner has made his mark in England—and increasingly here in America—as a fount of infectious, populist anthems that celebrate the power of music and poetry, living life to its fullest, and pursuing your dreams while there’s still time left.

Consider “Try This at Home,” a rollicking ditty from 2009’s Poetry of the Deed, Turner’s third studio album.

Let’s inherit the Earth, ’cause no one else taking it
C’mon do your worst, before the moment’s passed
In bedrooms across England and all the western world
There’s posters and there’s magazines, but the music isn’t ours.
Cause we write love songs in C and we do politics in G
We sing songs about our friends in E minor
So tear down the stars now, and take up your guitars
And c’mon folks and try this at home.

While the notion of aging—which pops up in many of Turner’s songs—sounds funny coming from a dimpled 30-year-old, he’s precisely at that stage in life where you start seeing friends compromise their youthful ideals for marriages, mortgages, and a steady paycheck. Turner has clearly felt that pressure himself. In “Faithful Son,” from the same album, he tells his parents that they need to step back and allow him to pursue his own destiny.

“The hang-up people have on social class in England just bores me rigid,” Turner says. “Who gives a fuck what your parents do for a living?”

Turner and his two sisters were raised in Hampshire by socially conservative parents, British through and through. “My family tree is English to the point of being boring,” he says. “My ancestors were not romantically adventurous people.” His certainly wasn’t the sort of family where people talked openly about their feelings. In any case, his folks eventually split up, and he is now estranged from his father, whose own father was chairman of a large retail-store chain. “His parents were wealthy and then his was the generation that screwed it all up,” Turner says of his dad.

He remains on good terms with his mother, the daughter of a priest who became a bishop in his later years. Not to say she approved of his career choice. “I think her impression of rock ‘n’ roll was lots of people with tattoos doing heroin and falling into sin in dark rooms,” Turner says, laughing.

Actually, she wasn’t all that far off. “Very early on in my solo career,” Turner says, “there was a period of time when I had no money at all, and I was traveling around on a train with a guitar, sleeping on the floor, sleeping in train stations, doing a lot of drugs, and was generally not in a particularly good way.”

Tattoos? Frank’s got plenty, from the aforementioned Black Flag logo to song lyrics—the tat you see at the end of his “I Still Believe” video is bona fide—to a pair of f-holes running the length of his forearms, which prompt me to suggest he should take up the fiddle. (Actually, he was thinking more along the lines of a Gibson hollow-body guitar.)

It was at the urging of his mother, who played piano and sang choir, that Turner began taking music lessons as a lad. He didn’t fare well—his piano teacher, he says with a laugh, told him he had no future in music. He started on guitar at age 10, around the same time he fell in love with Iron Maiden after seeing the band’s futuristic zombie-cowboy poster on his friend’s brother’s wall. “I was like, “Whatever that is, I’m into it, because it’s fuckin’ badass,” he says.

Like his father, Turner attended Eton, a prestigious school whose students included royal progeny. His family couldn’t afford the tuition, but he scored a full scholarship. And while the education was top-notch, he was repulsed by Eton’s caste-y social scene, wherein the children of the elite avoided the scholarship kids and generally looked down on people who weren’t just like them. “The hang-up people have on social class in England just bores me rigid,” Turner says. “Who gives a fuck what your parents do for a living?”

“It’s almost Puritan, the kind of work ethic idea of touring real hard and the iconoclastic idea of not putting people on pedestals.”

He found the medium of his rebellion in punk rock at a time when “punk stopped being about a bunch of snot-nosed art-school kids trying to piss people off and actually developed something of an ethos of its own,” Turner recalls. “It’s almost Puritan, the kind of work ethic idea of touring real hard and the iconoclastic idea of not putting people on pedestals. That was important to me.”

His first foray into performing was a short-lived band called Kneejerk, followed by Million Dead, a post-hardcore band that had a decent run and put out several records before disbanding in 2005. In the meantime, Turner attended the London School of Economics, where he studied history and toyed with the idea of becoming an academic. He’s still passionate about history, and likes to read it on tour. In “English Curse,” from last year’s fabulous album, England Keep My Bones (reviewed here), Turner sings a cappella about a specific incident of royal tyranny: If you steal the land of an Englishman, then you shall know this curse / Your first-born son’s warm blood will run upon the English earth.

By the time Million Dead fell apart, Turner was already playing some solo shows, so he decided to make a go of it. Once he got past the stage of sleeping in train stations, the rest is the sort of history he has reason to feel good about. Mum has changed her tune now that it’s Frank’s fans getting his lyrics and logos—and in one case, a portrait, which he find a little disconcerting—tattooed on their bodies. She comes to see him play and says she likes his music “very much.”

With the exception, of course, of “Glory Hallelujah,” the kicker on England Keep My Bones, where her only son sings, provocatively:

If this is true, then Turner won’t be “definitely going to hell.” Then again, he may be coming to your town, as his current US tour continues through March 17. You’ll find the details here.