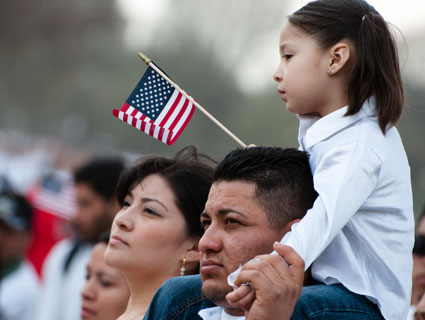 Draft immigration legislation being hammered out by the White House was leaked to USA Today over the weekend, and the paper had no trouble finding Republicans who balked at the president’s plan. Sen. Marco Rubio (R-Fla.), one of the members of the bipartisan “Gang of Eight” who recently cooperated on a proposal for comprehensive immigration reform, called the White House draft “dead on arrival.”

Opponents of immigration reform however, see the exchange as theater—”the point of leaking the bill is to enable Rubio to say that his amnesty plan is waaay different from the dastardly Obama plan,” wrote the Center for Immigration Studies’ Mark Krikorian at National Review. As a policy matter, Krikorian isn’t entirely wrong: Rubio’s hometown paper, the Miami Herald, also got ahold of the White House’s drafts and concluded that they “closely resemble many of the reforms advanced in 2011 by Obama and, more recently, by Republican Florida Sen. Marco Rubio.” (If you’ve been reading Mother Jones, that’s hardly surprising.)

What may be surprising however, is that Obama’s bill sets out a very long road to citizenship for undocumented immigrants. As Suzy Khimm writes at the Washington Post, under Obama’s proposal, those undocumented immigrants who are eligible for legalization would likely have to wait around 13 years for full citizenship—eight years of temporary legal status before acquiring a green card, then, as is standard under US law, about another five for citizenship. (If a backlog of existing visa applications is cleared before that initial eight years, the total wait could be shorter.) Lynn Tramonte, deputy director of the pro-reform group America’s Voice, tells Khimm that Obama’s proposal would “delay citizenship another generation.”

Compare that with the Immigration Control and Reform Act of 1986 that was signed by President Ronald Reagan, which allowed undocumented immigrants to apply for green cards after a temporary legal status of just 18 months. Add in the standard five years green–card holders have to wait before seeking citizenship, and under the bill Reagan signed the path to citizenship was half as long as Obama’s would be.

So if you‘re looking for an indication of where America’s immigration debate stands in 2013, note that Obama’s liberal proposal would be significantly harsher than the law put in place by the patron saint of American conservatism more than 25 years ago.