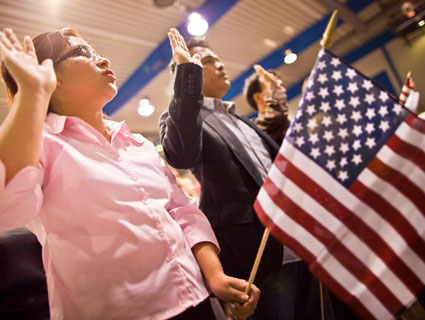 Click here to jump straight to the latest news updates.

In the wake of a presidential campaign that saw Mitt Romney popularize the term “self-deportation” and President Obama clobber his rival among Latino and Asian American voters, Obama and the Senate’s bipartisan Gang of Eight have announced the broad strokes of their respective immigration reform plans, which aim to deal with the approximately 11 million undocumented immigrants living in the United States. We put together this primer to help you follow the debate now brewing.

What is “comprehensive immigration reform”? For years, this expression has been code for an immigration compromise. It would include tougher border enforcement (more Border Patrol agents, fencing, etc.), while also proposing a path to citizenship for the undocumented immigrants already here. Guest worker programs are often the third prong, in theory providing a legal way for foreign workers to fill temporary jobs in the US.

Wait, didn’t we already have immigration reform in the mid-’80s? Well, yes. There were more than 3 million undocumented immigrants in the United States when Congress passed the Immigration Reform and Control Act of 1986 (IRCA), which sought to strike a balance among employer sanctions, border enforcement, and legalization. Its failures—the sanctions were largely toothless, and the legalization program was opaque and inefficient—in many ways have colored the reform debate to this day. (See: the amnesty crowd.)

According to Donald M. Kerwin (PDF) of the Migration Policy Institute, a DC-based nonprofit, even though “millions of persons with approved petitions…languished for years in unauthorized status” due to a lumbering federal bureaucracy, IRCA lowered the undocumented population of the United States by 1.8 million to 3 million people. The rise of that population in the 1990s and early aughts, Kerwin wrote, “can also be attributed in part to the failure of US legal immigration policies—which IRCA left almost entirely intact—to meet US labor market needs during these years. It also can be attributed to inconsistent enforcement of the employer verification laws and to flaws in the employer verification regime that make it difficult to detect when unauthorized workers present the legitimate documents of others.”

And didn’t we try again in 2007? Great memory! George W. Bush pushed hard for immigration reform during his second term, but the bill never got past the Senate. This New York Times roundup captures both sides pretty well: Sen. Jeff Sessions (R-Ala.), a staunch reform opponent, claimed that supporters wanted to pass the bill “before Rush Limbaugh could tell the American people what was in it.” Meanwhile, a defeated Sen. Ted Kennedy (D-Mass.) lamented, “The situation is going to get worse and worse and worse.”

What do both sides agree on this time around? There’s no way any deal gets done without more border enforcement (see below), so that’s a starting point. Additionally, lawmakers have added Romney’s plan to “staple a green card” to the diplomas of immigrants receiving advanced degrees in science, math, engineering, and technology at American universities. And the DREAM Act, first introduced more than a decade ago, finally seems to have bipartisan support. (The act offers a path to legal status for young people whose parents brought them here illegally as children.)

What are the stickiest points? Under the Senate’s plan, immigrants won’t be able to seek legal residency until border security has been achieved. (There’s still confusion over the role and power of the proposed Southwestern border commission, which would include border hawks like Arizona Gov. Jan Brewer.) Also, guest worker programs have traditionally been opposed by labor unions. On top of that, Obama’s push to grant gay and lesbian couples the same immigration rights as heterosexual couples has already been met with opposition from Republicans; at a January 30 event, McCain said: “Which is more important: LGBT or border security? I’ll tell you what my priorities are. If you’re going to load it up with social issues, that is the best way to derail it, in my view.”

Just to clarify: Don’t we already spend tons to secure the border? Sure do. Customs and Border Protection had a budget of $11.7 billion last year, $3.5 billion of that for the Border Patrol. As the Washington Post reporter (and Mother Jones alum!) Suzy Khimm pointed out yesterday, the United States has surpassed the border security requirements from the failed 2007 reform plan. Nowadays, we have 21,444 agents working the border, some 8,500 more than in 2007. Notably, 2011 saw the fewest Border Patrol apprehensions since 1971 (340,252)—at a whopping cost to taxpayers of $10,431 per apprehension—four times as much as in 2007.

Hasn’t Obama deported a lot of people already? The Obama administration deported some 1.4 million people during his first term, not far off from the number George W. Bush deported over eight years. 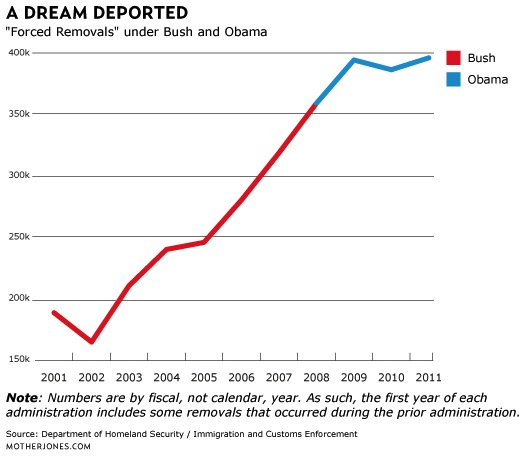 Enough numbers! Help me with the vocabulary. Lightning round! A quick mini-primer:

UPDATE, Thursday, January 31, 11 a.m. PT: ABC/Univision’s Ted Hesson weighed in today on the guest worker divide, writing that business and labor—specifically, the CEO of the US Chamber of Commerce, Tom Donohue, and the president of the AFL-CIO, Richard Trumka—are meeting to hammer out some sort of deal. Unions are looking for a program that allows for visa numbers to fluctuate each year based on need. They also want the immigration bill to include an economy-evaluating commission that will make suggestions regarding yearly visas issued—a plan unpopular with some conservatives. “I think we can come to a working conclusion very soon,” Trumka said.

UPDATE 2, Sunday, February 3, 7:23 a.m. PT: This morning on ABC’s This Week, Senate Majority Leader Harry Reid (D-Nev.) told host George Stephanopoulos that immigration reform was “certainly gonna pass the Senate.” “I think things are looking really good,” Reid said. “They’re good-looking for a number of reasons. One, it’s the right thing to do. And No. 2, the Republicans can no longer stop this. They’ve tried it. It hasn’t worked.”