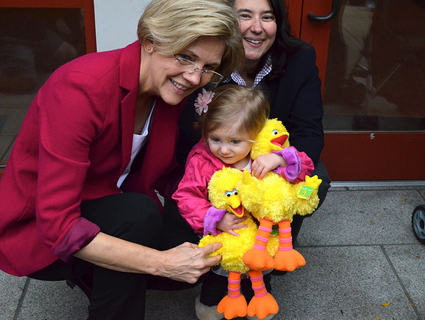 Harry Reid, the Democratic Majority Leader in the Senate, couldn’t have asked for a better night. Every incumbent Democratic senator up for re-election won; the party picked up a seat in Massachusetts (and perhaps another in Maine); and, assuming the results stand, won a race it had no business winning in deep-red North Dakota. But the big news from Tuesday isn’t just that the Democrats held onto the majority, it’s what that majority now looks like—much more progressive.

Four of the five most most liberal candidates in contested Senate races won on Tuesday (only Arizona Democrat Richard Carmona fell short), according to ideological ratings compiled by University of Chicago political scientist Boris Shor. Per Shor’s rankings, Connecticut Rep. Chris Murphy was the most liberal candidate in any contested race to win a Senate seat—more liberal than the progressive icon Elizabeth Warren, even. And Murphy replaced a centrist Independent Joe Lieberman. That’s a big boost. Right behind Murphy is Wisconsin Rep. Tammy Baldwin, a member of the House Progressive Caucus who seems a sure bet to become something the retiring Democratic Sen. Herb Kohl never was—a loud voice for progressive causes. Warren, the fourth-most liberal Democratic challenger (behind Hawaii’s Mazie Hirono, who won easily) replaced Sen. Scott Brown, a moderate Republican. A political celebrity even before she entered the race on account of her work monitoring TARP, Warren will likely be handed an oversized role for an incoming lawmaker on issues like housing and banking. Here’s a chart, by way of the Washington Post‘s Ezra Klein: 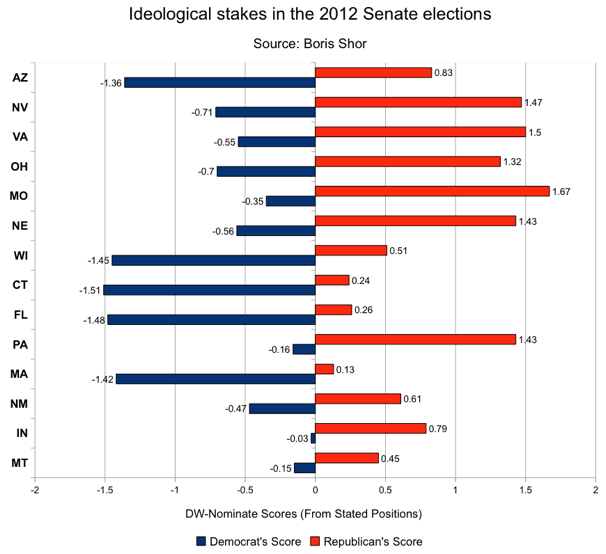 The biggest win for liberals came in Missouri, where Sen. Claire McCaskill, never a liberal favorite, managed to take down Rep. Todd Akin, the second-most conservative candidate on the ballot (only Wyoming’s John Barrasso outdid him). Elsewhere, Democrats replaced a moderate Republican Sen. Richard Lugar with Rep. Joe Donnelly, whom Shor gives an ideological score of .03—just about dead-center. That’s a slight shift, but it’s something. The only real reversal of the trend came in Nebraska, where centrist Dem Ben Nelson was replaced by Deb Fischer, the most conservative challenger to win on Tuesday.

The Senate’s shift to the left is consistent with two other notable developments on Tuesday night. As my colleague Adam Serwer noted, liberals scored big wins at the state level, going 4-for-4 in gay marriage initiatives (legalizing it in Washington state, Maryland, and Maine), decriminalizing marijuana in Colorado, and giving undocumented kids in Maryland in-state college tuition. And as a whole, Congress took a few steps closer to resembling the nation it serves—Hawaii Democrat Tulsi Gabbard will be the first practicing Hindu to serve in the House; Baldwin the first openly-gay Senator; Hirono the first Asian woman. For the first time, women comprise an entire state delegation (New Hampshire’s), and a record number of women will join the 112th Congress.