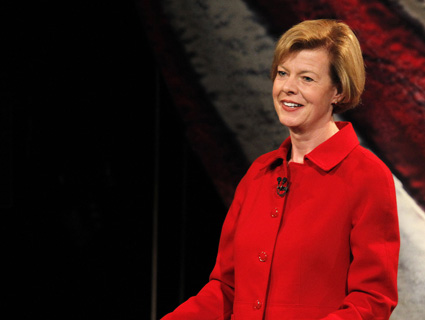 There she goes again, making history.

Liberal congresswoman Tammy Baldwin of Wisconsin ended Republican Tommy Thompson’s four-decade political career, winning 51 percent of the vote on Tuesday in the state’s bitterly fought US Senate race. Baldwin will be the first openly gay senator in the institution’s history and Wisconsin’s first female senator, just as she became the first openly gay Wisconsin State assemblywoman in 1992, and the first openly gay candidate to win a US House election in 1998. Baldwin knows the significance of her election: “Sometimes I think my most significant contribution is not the legislative initiatives I introduce, but the stereotypes I shatter.”

Baldwin said that in 1993. During her victory speech Tuesday night, she downplayed her history-making win. “I didn’t run to make history; I ran to make a difference,” she said. “A difference in the lives of students worried about debt and seniors worried about their retirement security.”

That comment speaks volumes about the campaign run by Baldwin and her team. They didn’t tout Baldwin as a pathbreaker; instead they pitched her to Wisconsinites across the state as a champion of working people and an avowed defender of Wisconsin manufacturing.

Baldwin’s first campaign ad set the tone: It was a broadside against China’s currency manipulation and a full-throated defense of Wisconsin’s paper industry. “In Wisconsin, we lead the entire nation in paper industry jobs,” Baldwin said. “But China, they lead the world in cheating.” You could imagine a tea partier saying that—but a Democrat from Dane County, Wisconsin, a bastion of liberalism “surrounded by reality”?

Political experts praised Baldwin’s decision to focus on economics and jobs. “You’re talking about someone stepping outside the stereotypes and representing herself in a way that is right up the alley of job creation,” Charles Franklin, a political scientist who oversees Marquette University’s polling, told me this summer. “I don’t think you can win on just the paper issue, but she’s chosen the issue that seems to me to have the potential for much broader appeal.”

Baldwin’s focus on manufacturing and blue-collar workers, and also the discipline and hard work I saw her put in on the trail this summer paid off in the end. “I think Tammy ran a flawless race,” Milwaukee Mayor Tom Barrett told the Milwaukee Journal Sentinel. “She was unflappable.”

Tommy Thompson…not so much. He courted controversy during his campaign by, for instance, claiming he was the man to “do away with Medicare.” His years as a Washington lobbyist and the money he made from that gig dogged him all the way to Election Day. (Wisconsin Democrats made sure of that.)

Thompson, who served four terms as Wisconsin governor, also began his battle with Baldwin short on cash after a tough primary fight. He raised $7.4 million for his Senate campaign, well short of Baldwin’s $12.6 million haul. As the general election got underway Baldwin used her financial advantage to blitz the airwaves with ads supporting her. Both candidates saw outside money-funded ads hammer them. Of the $66 million spent in the Baldwin-Thompson race—a state record, by the way—almost $46 million came from super-PACs and nonprofit groups.

Thompson led Baldwin in the polls right after his mid-August primary win, but Baldwin’s barrage and finely tuned message paid off. She took the lead in the race in late September, and never relinquished it.