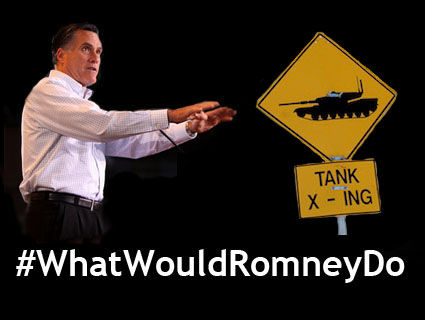 Say Mitt Romney pulls off a victory on Tuesday: What might he move to do on the national security front as president? Here are some of the possibilities:

1. Ratchet up military hostilities with Iran. Or Russia. Or China. Or Syria…

Romney has been short on specifics with respect to Iran’s nuclear ambitions, other than to say he’d press for greater sanctions than the Draconian ones already secured by President Obama. But one difference is Romney’s willingness to back threats with what he calls “a credible military option.” That means attacks on Iranian targets, whether by US or Israeli forces, are on the table. Romney would need congressional approval for a full-on war, but as commander-in-chief, he could take provocative steps that would make such a conflict difficult to avoid: He has vowed to increase naval exercises with Arab states, and to maintain a more robust US naval presence in the Persian Gulf. Recent history in the Cold War and in the Gulf itself suggests that putting US military assets in close proximity to adversarial forces increases the risk of a violent conflict.

Likewise, Romney has rattled the saber against Russia (“our No. 1 geopolitical foe“), China (“On day one, I will label China a currency manipulator”), and Syria (which he incorrectly called Iran’s “route to the sea“). Such tough rhetoric complicates US diplomatic relations with the first two and raises rebels’ expectations for US intervention in the latter.

Romney plans for the US to spend a minimum of 4 percent of annual GDP on defense, which one expert calls “skyrocketing North of Cold War levels.” That would add $2 trillion in new defense spending above what the Pentagon has requested for the next decade. That would require congressional approval (unlikely if the Democrats retain a majority in the Senate) and it doesn’t even take into account the defense cuts of $492 billion over the next decade that are set to trigger automatically as a result of last year’s congressional debt compromise. But Romney would have other means for deploying defense spending, including:

Even without Congress, the commander-in-chief has vast power to prioritize contracts “to promote the national defense,” and Romney defense proxies have reassured the military contractor community that they can expect to do just fine with Romney as commander-in-chief. Builders of ships and aircraft can expect a windfall of new pork projects, including: a line of $700 million frigates the Navy isn’t asking for; upgraded tanker aircraft and strategic bombers; extra submarines; reopened production lines for fighter jets the Obama administration canceled; and an additional 11th carrier air wing. That last request—which amounts to 100 or so multi-million-dollar fighter, bomber, and recon aircraft—may be sensible, since we have 11 aircraft carriers. But one carrier is always in dock, being refueled and overhauled, which means there is no place to stick an extra air wing. New naval air base, anyone?

4. Leaky ships and shaky jets for our troops.

Two additional programs Romney says he would support are the Littoral Combat Ship (total program cost: $120 billion) and the F-22 Raptor ($79 billion). One version of the Littoral Combat Ship has at least 17 cracks and has sustained 640 equipment failures in less than 3 years. Sen. John McCain (R-Ariz.) says the program makes him “ashamed and embarrassed…as a person who is responsible to the taxpayers in my state.” The F-22, the world’s most expensive fighter jet, was designed to fight Soviet aircraft in the 1980s. Today, critics say the jet has no mission—it’s never even been used in combat—and it tends to cause pilots to black out, which is potentially fatal.

Romney has indicated he would go long on ballistic missile defense, a pie-in-the-sky boondoggle that has cost the US $150 billion since Ronald Reagan’s “Strategic Defense Initiative” first appeared on a drawing board. President Romney would reverse Obama’s planned cuts to “Star Wars” projects, place a missile “shield” around “the people of the United States” and US allies, and possibly put missile defense batteries in Poland as an immediate challenge to Iran and Russia. He even wants to build a new naval ship that can counter nuclear missiles in space.

Romney has proven a big fan of the Guantanamo Bay Detention Center, saying he wants to “double it” and claiming it “plays an important role in protecting our nation from violent, heinous terrorists.” He says he supports “enhanced interrogation techniques,” but not torture…even though human rights committees widely consider them the same thing. (Romney doesn’t consider waterboarding torture, for example, even though the United Nations defines it as such.) Given how much congressional resistance Obama met in attempting to shut down Gitmo, a President Romney may find it easy enough to beef up the prison and to corral and brutalize more “enemy combatants.”

7. Assassinating people, including US citizens and kids, with flying robots.

Here, a Romney presidency may be no different than a second term for Obama: Romney agrees with the current administration’s policy of using drone strikes to kill terrorists. It’s unclear exactly how many civilians have died as a result of this counter-terrorism strategy—the process has little transparency—but estimates run to more than 450. Human rights activists are particularly concerned over the 2011 killing in Yemen of Anwar al-Awlaki, a US citizen and alleged Al Qaeda collaborator; they say the assassination violated US and international law. Romney called that attack, which also killed Awlaki’s teenage son, “a major victory.”

Expect President Romney to institute more corporate control over military decisions. Calling the Pentagon civilian employees’ ranks “ripe for being pared,” the former Bain Capital CEO has vowed to “find efficiencies throughout the Department of Defense budget that can be reinvested into the force.” Romney’s top military surrogate, former Reagan navy secretary and current shipping investor John Lehman, has cited reports of Pentagon bloat by the Defense Business Board, a Rumsfeld-created group of business executives who have pressed to restructure the military’s civilian bureaucracy more like a Fortune 500 company. Their plan is replete with layoffs, adding more business-school grads, eliminating unions, and watering down veterans’ pension and health benefits.

The Pentagon isn’t the only thing Romney might aim to make more like a blue-chip firm. In 2007, he told the Wall Street Journal‘s editorial board that he’d invite business consultants in to revamp the presidential cabinet. “I would consult with the best and the brightest minds, whether it’s McKinsey, Bain, BCG or Jack Welch,” he said. There’s no reason to believe his Harvard MBA experimentations would stop short of the military.

9. Letting Israel do whatever it wants, and hoping for the best in the Middle East.

For all his tough talk on foreign affairs, Romney rolls over and shows his belly to America’s key ally in the Middle East. In the “47 percent” video of Romney speaking off-the-cuff to big-money donors privately in Florida, published by Mother Jones in September, Romney wrote off a two-state solution between Israel and Palestine and basically said his policy toward the Middle East would be to do nothing. “All right, we have a potentially volatile situation but we sort of live with it, and we kick the ball down the field and hope that ultimately, somehow, something will happen and resolve it,” he said. He’s since tried to walk back those remarks, including in last month’s presidential debate on foreign policy, but given his desire to please conservative Prime Minister Benjamin Netanyahu, if Israel rejects a two-state solution, it’s a good bet Romney also will.