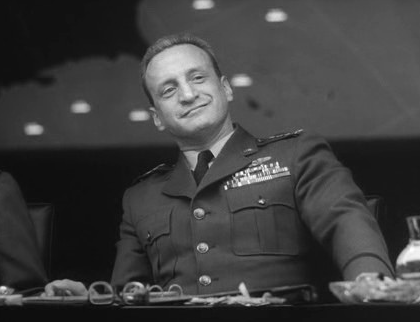 During last night’s foreign policy debate, Barack Obama shot a hard zinger at Republican challenger Mitt Romney: “The 1980’s called; they want their foreign policy back.” Throughout the night, the president argued that Romney treats defense spending as if the US were still in a neck-and-neck arms race with Russia. But in fact, Romney’s military budget puts Cold War spending to shame: It’s the kind of plan that Gen. Buck Turgidson, the ultranationalist hawk in Dr. Strangelove, could only dream about.

“Romney’s plan to spend 4 percent of the GDP on defense sends the budget skyrocketing north of Cold War levels. It’s amazingly unprecedented,” says defense-budget expert Winslow Wheeler, a former Senate aide who now directs the Straus Military Reform Project at the Project On Government Oversight. Obama doesn’t seem to have any new ideas on how to modernize the military, but at least “he’s spending the same amount of money,” Wheeler says. “If Romney is elected, he’ll quickly realize his plan is completely unaffordable.”

Wheeler put together the chart below (using sources from the Department of Defense Greenbook, the OMB 2013 budget, and the Romney website as interpreted by Travis Sharp of the Center for New American Security), to show exactly how the Obama and Romney plans compare. The numbers are in billions of dollars, adjusted for 2012 inflation:

US Military spending: comparing obama, romney and the cold war (in 2012 dollars) 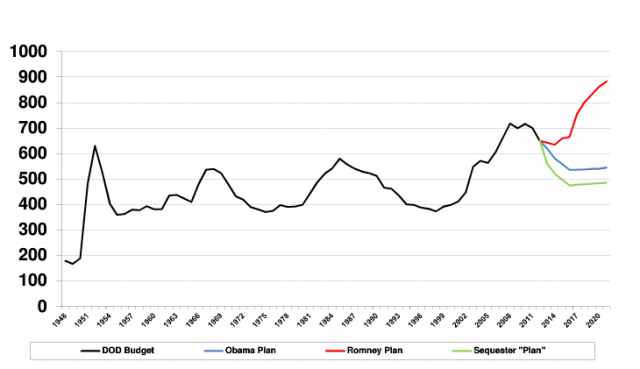 According to Romney’s website, the US should spend freely to update “aging” weapons like tanker aircrafts, strategic bombers, and Navy ships. But instead of proposing new ways to do so, Romney is relying on existing designs. For example, he wants to reopen production of the F-22 Raptor, the most expensive fighter jet in human history, even though the plane has faced numerous technical problems. Romney also would continue production of the $120 billion Littoral Combat Ship, which has its own troubles: One version is corroding, has serious equipment failures, and can hardly stay afloat.

“We certainly need to modernize the inventory with affordable, effective airplanes,” Wheeler says. “But Romney’s alternative is business as usual: throwing more money at the problem without investing in competition and smart contracting.”