One of the hallmarks of Mitt Romney’s presidential campaign has been the long trail of less-than-enthusiastic endorsements he’s received from important (mostly social conservative) leaders. Rick Santorum said Romney was “the better” candidate and, when pressed on whether it was an endorsement, countered, “If that’s what you want to call it, you can call it whatever you want.” Anti-tax activist Grover Norquist endorsed Romney by noting that conservatives didn’t need a hero; just “a Republican with enough working digits to handle a pen.” Former President George W. Bush offered his blessing just before getting on an elevator. But this open letter, posted by Evangelical powerbroker and homeschool advocate Michael Farris on his Facebook page, has to win some sort of prize for least-enthusiastic endorsement.

Farris, founder of Virginia’s Patrick Henry College (billed as the “Evangelical Ivy”) threw his support to Santorum during the Republican primary, but met with Romney at the candidate’s request on his campaign bus last month. He wasn’t bullish on Romney going in. As he told CNN in April, “Some of us just have a hard time supporting a person who said he was going to be more liberal on gay rights than Ted Kennedy.”

On only one issue (out of five) does Farris conclude that Romney is “one of us”—he’s a good family man. Otherwise, it’s a litany of not-quites and could-be-worse.

On abortion: “Mitt Romney has a checkered past on the issue. He claims that he has been converted to the pro-life position. I don’t feel convinced that he has fully converted. However, it is clear that he is talking pro-life talk and taking pro-life positions. I think he does this, at least in part, because he realizes that being perceived as pro-life is necessary for his political success…at a minimum, I think we can count on him to keep up this pragmatic approach until November of 2016.” 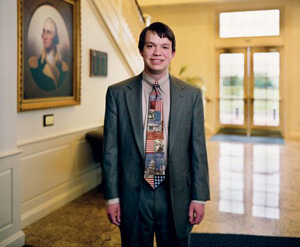 On marriage: “He now says that he is against same-sex marriage. But his rhetoric and record is so mixed on homosexual rights issues that it is hard to know what to expect.”

On the role of government: “Mitt Romney will spend way too much money and will promote programs at the federal level that properly belong to the states. But, unlike Barack Obama he does not believe in the redistribution of wealth as a moral imperative… He is indifferent to small government conservative views on spending, but he is not an enemy of private property that is inherent in those who believe in the redistribution of wealth.”

When I caught up with Farris at his Purcellville, Virginia office on Wednesday he emphasized that his essay was not an endorsement. He wasn’t encouraging conservatives to volunteer for Romney, or even vote for him; it’s entirely up to them. This matters because Farris isn’t just a advocate for the legal rights of homeschoolers—he’s the founder of Generation Joshua, an activist organization that sends homeschoolers to swing states in the final weeks before big elections to knock on doors and make phone calls for likeminded politicians. In previous years, those kids (about 2,000 of them) have chipped in for GOP presidential candidates like George W. Bush. But this time around, Farris says, they’ll be focusing solely on House and Senate races. “We’ve previously done it for presidential campaigns, but frankly we haven’t been asked.”

Still, even if the love isn’t there for Romney, he’s confident homeschoolers will have enough of an incentive to get out the vote: “The difference this time,” Farris says, “is that the fear of a Barack Obama second term is greater than anything I’ve ever seen.”