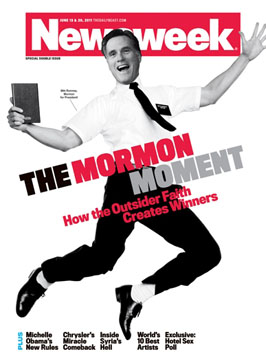 Apropos of my post this morning suggesting that Republicans unhappy with the current presidential field will come around, here is Rick Perlstein:

I’ve never been impressed with the argument that Mitt Romney makes for a weak Republican nominee because conservatives don’t like him. That’s not how that party works. Like they say, “Democrats fall in love, Republicans fall in line.” Don’t believe me? Think back four years. When the race was still up in the air, the venom aimed at McCain was ten times worse than anything being suffered by Mitt. I collected the stuff back then: Rush Limbaugh said McCain threatened “the American way of life as we’ve always known it”; Ann Coulter said he was actually “a Democrat” (oof!); an article in the conservative magazine Human Events called him “the new Axis of Evil”; and Michael Reagan, talk radio host and the 40th president’s son, said “he has contempt for conservatives, who he thinks can be duped into thinking he’s one of them.”

Then McCain wrapped up the nomination, and Mike Reagan suddenly said, “You can bet my father would be itching to get out on the campaign trail working to elect him.” One thing Republicans understand: In American elections you have to choose from among only two people — not between the perfect and the good.

Roger that. However, Rick then goes on to argue that Romney’s Mormon faith won’t hurt him among evangelicals. After all, evangelicals hated Catholics 50 years ago (“Mother of Harlots,” “Whore of Babylon,” etc.) but they eventually came around when they decided they needed to make common cause to fight abortion. “When the siren song of cobelligerency beckons,” he says, “theological qualms tend to fall away. That’s the way it’s always been.”

I’ll buy that. But the real question is: When? Rick suggests that conservatives usually abandon their cultural prejudices “in the fullness of time,” but Romney doesn’t have the fullness of time. He’s got nine months. And it’s not clear to me that evangelical suspicion of Mormonism as a cult is going to disappear in nine months.

This won’t hurt Romney a lot. The alternative is our current Muslim president, after all, so most evangelicals will come around. But if even a few percent don’t, and if a larger number vote but don’t actively campaign, that could be enough to sink him. In a 50-50 nation, even a few percent can spell the difference between victory and defeat.