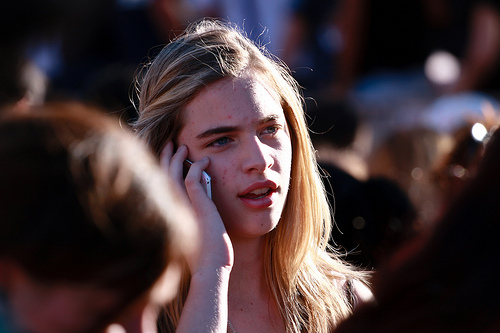 Are Obama voters underrepresented in presidential polls because they use cellphones?

That’s the argument put forward by Democratic pollster Stan Greenberg in a new memo released Monday. Government data shows that an increasing percentage of Americans have ditched their traditional land-line phones and now use only cellphones. A year ago, 32 percent of adults used only a cellphone, according to the Center for Disease Control, which tracks cellphone usage. But more and more Americans are relying solely on their cellphones—Greenberg estimates that that figure is now 37 percent. And government statistics show still larger percentages of hispanics, blacks, and young people—all of whom are more likely to favor Obama, polls show—use cellphones only.

Why does this uptick in cell-only users matter? Because, as Greenberg writes, some polls used to gauge the state of the presidential race don’t reach these people—and could therefore be lowballing Obama’s standing. (Robocalls are used by many pollsters, but cellphones are blocked from receiving robocalls.) Greenberg went back and analyzed 4,000 of his polling firm’s interviews this election season and found that cell-only voters break for Obama in significant numbers. As the following charts show, people who only use a cellphone said they’d vote for Obama by an 11-point margin, and those who mostly use a cell opted for Obama by 9 points. On the other hand, those who said they used a landline and a cellphone backed Romney by 3 points. 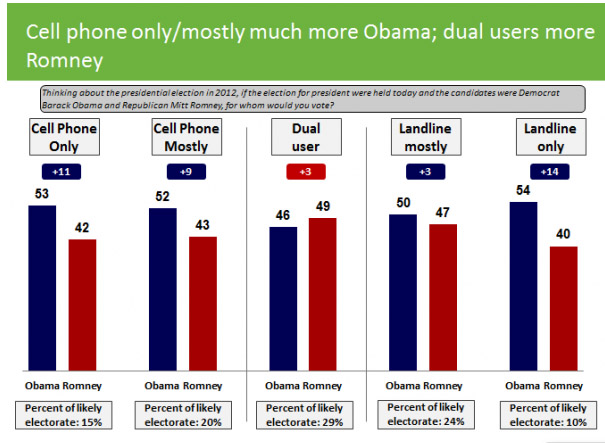 Cellphone-only respondents, Greenberg says, are “attitudinally and culturally distinct.” They’re less conservative, but not necessarily libertarian, either, though they praise both the National Rifle Association and same-sex marriage. They’re a crucial piece of the electorate not entirely captured by polls used in the presidential race.

Greenberg isn’t the first pollster to point out Obama’s bump from cellphone users. Back in September, the New York Times‘ Nate Silver found that Obama fared better in polls that include cellphone users. The right-leaning Rasmussen polling shop—which tends to show Romney faring better than Obama—doesn’t include cellphones; neither does the left-leaning Public Policy Polling, which shows Obama doing better in the race. Gallup—which puts Obama ahead among registered voters and Romney in the lead among likely voters—includes cellphones in its sampling.

Greenberg’s key takeaway is this: Pollsters aren’t capturing what he calls “the new diversity of the American electorate” if they aren’t surveying voters who depend on cellphones. If pollsters were doing that, Greenberg suggests, Obama would have a bigger lead over Mitt Romney than he’s got right now.