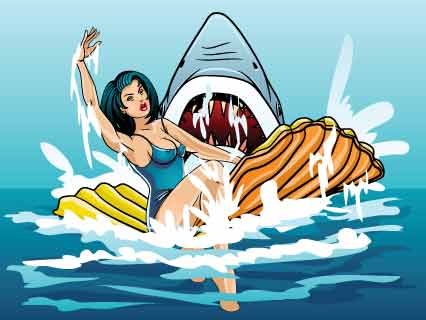 After yesterday morning’s important news that menstruation doesn’t increase your risk of being attacked by a bear, a friend tweeted a great question at me: “Ok, but it’s SHARK WEEK! What about swimming with your Aunt Flo?”

I immediately set about emailing shark experts. The Monterey Bay Aquarium declined to comment. The Vancouver Aquarium was more willing to put a toe in the water. “Honestly, I think the jury is still out on this question,” emailed Ann Dreolini, a spokeswoman. “According to what I have read so far, there are people who believe the chance of a shark attack is greater while menstruating…and others who think this has absolutely no impact on shark attacks at all.”

But Ralph S. Collier, a shark behavior expert who has been documenting shark attacks since 1963 and now heads up the nonprofit research and conservation group Shark Research Committee, told me about a study that his friend and fellow shark expert H. David Baldridge conducted in the late ’60s. I couldn’t find the study online, but according to Collier, Baldridge introduced several human body fluids—including menstrual blood—to captive wild sharks in open ocean pens to see if any would elicit a feeding frenzy. The only one that did cause such a reaction was peritoneal fluid, the liquid found in our abdominal cavity. (Unfortunately, said Collier, Baldridge’s grant money ran out before he could figure out what was so bewitching to sharks about our gut fluid.)

Collier noted that blood from animals native to the marine environment do elicit feeding frenzy reactions in sharks. “But our blood is different from a sea otter’s blood or cetacean blood,” he said. “Our blood is from a terrestrial environment.” He theorizes that the scent of human blood doesn’t send the message to sharks that there is an animal in distress nearby, fit for a meal.

Still, he said, Baldridge’s study was not comprehensive, and he advises people with abrasions not to go into the ocean. “If it’s a young lady for whom it’s that time of the month,” he added, sounding somewhat uncomfortable, “it’s better to be safe than sorry. Better to wait till everything is back to normal to go into the ocean.”

Tell that to Marie Levine, founder and executive director of another nonprofit called the Shark Research Institute. “I’ve been diving for decades and even got my period while underwater with a school of hammerheads—the sharks were not interested and I had to fin like crazy to get close to them,” she wrote to me in an email.

And then there’s this page over at the Florida Museum of Natural History. Ichthyologist George H. Burgess writes:

Menstrual blood almost certainly can be detected by a shark, and I’m sure urine can be as well. Do we have positive evidence that it is a factor in shark attack? No, and until some menstruating and non-menstruating divers volunteer to take part in a controlled test we’ll never prove it. In my opinion it likely is attractive to sharks in certain situations.

Interestingly, according to Burgess, 90 percent of recorded shark attacks have involved men. But that doesn’t necessarily mean that sharks are gender-biased:

This reflects a historic pattern of more males engaged in marine aquatic activities, especially those that put humans most at risk, e.g. surfing, diving, long distance swimming, warfare. It in no way can be attributed to sharks “preferring” males over females. In recent years proportionately more females are being attacked because more females are engaging themselves in riskier, formerly males-only activities.

In conclusion, Burgess advises: “Don’t worry about it. Lots of women safely dive while menstruating.” On the other hand, if you prefer not to participate in freezing and dangerous sports made more dangerous by the presence of sharks, “I’m having my period” seems as good an excuse as any.