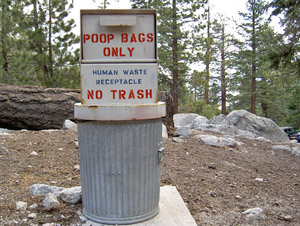 Ah wilderness! What better place to escape the stifling trappings of urban existence—overflowing inboxes, two-hour commutes, social-media addiction. And, of course, indoor plumbing. “Take off your shoes for a while, unzip your fly, piss hearty, dig your toes in the hot sand, feel that raw and rugged earth,” the great Western author and curmudgeon Edward Abbey once exhorted car-bound city slickers. Contemplating the reasons for taking a trek down the Appalachian Trail (and aping Abbey-ish machismo), travel writer Bill Bryson mused, “I wanted a little of that swagger that comes with being able to gaze at a far horizon through eyes of chipped granite and say with a slow, manly sniff, ‘Yeah, I’ve shit in the woods.'”

But before you go forth and drop trou in the great outdoors, you may want to consult Kathleen Meyer’s How to Shit in the Woods: An Environmentally Sound Approach to a Lost Art. Since it was first published in 1989, it’s sold more than 2.5 million copies and introduced many an outdoor enthusiast to what Meyer, a longtime river guide, calls “a skill all but lost to the bulk of the population along with the art of making soap, carding wool, and skinning buffalo.” Just republished, HTSITW is packed with pro tips for going about your business (particularly pooping) in the wild as conveniently, hygienically, and unembarrassingly as possible.

Beyond tackling the practicalities of squatting and digging cat holes, HTSITW also presents a mini-manifesto on applying the Leave No Trace ethos to your bodily functions. If you’re committed to minimizing your impact when you go hiking or camping, Meyer suggests, you should seriously think about treating your poop like your garbage—and that means packing it out with you. Human poop, which takes about a year to biodegrade, can be an environmental hazard. It can befoul trails and campsites, and if it’s left too close to streams or watersheds, it can contaminate groundwater. Meyer maintains that human waste is a major cause of the increased prevalence of giardia in wilderness groundwater. (Not everyone shares her concerns about the diarrhea-inducing intestinal parasite, and there are differing findings on just how widespread the disease is in the backcountry and its ultimate sources.) With more than 1.7 million visitors roaming the backcountry areas of National Parks annually, there’s potentially a lot of poop piling up out there.

Though it’s not for the squeamish, poop-packing has been embraced by a growing number of campers and parks. Outhouses have been taken down in some wilderness areas and “Pack It Out” rules are in effect in several national parks and backcountry areas, from Denali to the Grand Tetons.

So how exactly do you take your poop with you? Meyer describes a slew of tools to assist you. There are cheap and low-tech methods, such as modified five-gallon buckets, biodegradable bags, and homemade PVC pipe Poop Tubes. And there are more sci-fi technologies, like Poo Powder, “a proprietary blend of a NASA-developed super-absorbent” that bonds with feces to form a solid, odorless block (check out the demo video here) and the SCAT Machine, a giant coin-op washer for soiled waste containers that can be found at some trailheads.

Kathleen Meyer talked more about eco-friendly wilderness evacuation from her home in Montana.

Mother Jones: Humans have been pooping au naturel for eons. Why has this suddenly become a problem in the last 30 or 40 years?

Kathleen Meyer: It’s the amount of people and the amount of people going in concentrated groups up the same trails and down the same rivers. What illustrates the most is what happened in the Grand Canyon in the early 70s when whitewater rafting really started to get fashionable and it became more and more people going down a steep canyon with very few beaches. There’d be maybe 30 different people camping on the same beach every night. It became obvious to the people running the trips that that couldn’t go on very long. Pretty soon you were digging up someone else’s stuff to bury your own; it got pretty gross. So they were the first to understand that it needed to be packed out.

It’s the same on mountain trails where people step two to three feet to the side or behind the first bush, so that area gets lots of deposits. Other people scooping up snow for water get giardia. Now mountaineers are getting into [packing out their poop] because they tend to travel the same routes up snowy mountains and leave deposits.

Aqua dump: Kayakers’ and surfers’ practice of slipping into the ocean to relieve themselves.

Frosting: Smearing poop on an exposed rock to be baked away by the sun.

MJ: Is there anything appreciably different between human poop and the poop of an animal that’s native to a particular ecosystem? Is a raccoon’s poop more eco-friendly than the poop of a human who comes into the backcountry?

KM: That’s one I get asked a lot—like, why do we have to worry about this; what about all the animals that are popping out there? One, animals don’t stay right along the trail. And they also don’t fly around the planet like we do and pick up some bacteria in South Africa and shit into the Colorado backcountry. We can truck around diseases really fast, whereas something in the animal kingdom would spread more slowly.

MJ: That brings us to giardia, which you talk about a lot. When I was growing up, we were told not to drink the water in the Sierras and were told giardia came from beavers and other animals. You strongly suggest that humans are partly to blame for the spread of giardia during the past few decades. Why do you think that?

KM: When I was running rivers in the early 70s, we were all drinking water out of mountain streams and none of us were getting sick. There are some people who are asymptomatic, but we couldn’t have all been asymptomatic. There has been at least one study I’ve read where beavers managed to cleanse themselves of giardia over the winter and it was people who reintroduced it to the area in the spring. We’re the ones with a brain and are supposed to be smart, so we can do something about this. I think it’s our responsibility more than the beavers’ to figure it out.

MJ: It seems like the verdict is out on the source of giardia. Some people are skeptical that it’s as widespread as you say it is.

KM: A person could spend 30 years in the backcountry and drink from surface water and not get giardia and therefore spout that it’s a myth. Giardia is not in every cup of water.

MJ: But you advocate filtering all your water when you’re camping just in case.

KM: I would, because I don’t relish the idea of having the green apple two-step when I’m out in the woods. Going down a river, it’s just miserable! I’ve been sick enough in my life that I don’t want to be sick if I can avoid it.

MJ: I’m curious what your preferred method for packing poop out is.

KM: For river trips, I like the bucket system that was started up by the BLM over in Oregon. The river runners use ’em, the horse packers use em, ATVers use ’em. You cover each deposit up with potting soil—though I recommend peat moss because it will start the breakdown. Then you can dump it into a trailhead vault toilet. The big problem is that you have to take it home and clean it. But we’re all used to cleaning toilets; it’s not much different than that.