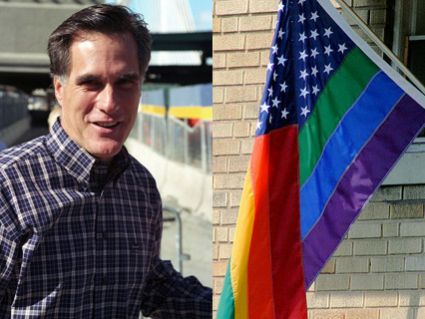 Mitt Romney has received plenty of plaudits for his takeover of the 2002 Winter Olympics, after the Salt Lake Organizing Committee (SLOC) became mired in a major bribery scandal. But there’s one accomplishment from his time in Salt Lake City that has been largely omitted from the oft-told narrative of his Olympic effort: Romney’s success in making the 2002 Winter Olympics one of the most gay-friendly games in Olympic history.

The achievement gets barely a mention in Romney’s 2004 book, Turnaround, about his role rescuing the Salt Lake Olympics. Despite the urging of a close associate at SLOC, who suggested that Romney spotlight the committee’s work to make the games gay-friendly, the then-Massachusetts governor wrote just three sentences about his pro-gay diversity efforts. But the little-known chapter in the story of Romney’s Olympic leadership illustrates how much the GOP presidential candidate has backtracked on gay and lesbian issues since 1994, when he promised to be better on gay rights than his then-opponent for the US Senate, Sen. Ted Kennedy (D-Mass.).

When Romney first took the helm of the SLOC, the organization wasn’t known for being inclusive to minority groups of any sort, much less gays and lesbians. Of the 55 members of the SLOC’s board of trustees, 40 were men and 48 were white. Likewise, the staff of the SLOC was 93 percent white and 53 percent male. Former Olympic biathlete and board of trustees member Joan Guetschow recalls her first board meeting, when Romney was introduced to the board as “Brother Romney” by the other Mormon members of the board, who then invited new board members to stand up and introduce their “wives.”

Guetschow attended the event with Olympic skeleton racer Tricia Stumpf, to whom she is now married. She was uncomfortable “introducing ‘my wife’ to what appears to be a very homogenous group of primarily white guys,” so she introduced Stumpf as “my friend,” and then joked, “That’s a safe way to put it.” Members of the board “were stone-faced,” Guetschow says.

Later during Romney’s tenure, after some embarrassing media criticism and internal pressure from Lillian Taylor, one of the few African Americans on the board of trustees, the SLOC attempted to diversify the workforce. To that end, it created a minority-outreach council charged partly with recruiting volunteers from various minority groups represented by members of the council. (The Salt Lake Olympics would eventually rely on 24,000 volunteers to staff the events.)

“We had Larry Blackhair, who represented the native tribes across the US,” says Ed Eynon, who was the SLOC’s human resources director. “We had the NAACP represented. We had individuals representing the Latino community. We had seniors.” As they went along, the SLOC periodically held press events to release some data about their progress in diversifying the Olympic workforce. The events soon caught the attention of a group who wasn’t represented on the council: gays and lesbians.

Eynon agreed to a meeting. “They showed up with about 10 people, 8 of them were attorneys,” he recalls. “They said they were not treated well by the Games in general, so they came in feeling like we wouldn’t be cooperative. I was shocked by that.” One day Eynon got a call from Jim Dabakis, head of the Utah Pride Center (then called the LGBTQ Community Center of Utah). He’d been watching the local news reports on the Olympic diversity efforts. “He was upset,” Eynon says, and “felt snubbed and he felt their group hadn’t been included.”

Of course, given the heavy involvement of the LDS Church in the games, and the fact that Mormon men like Romney (and Eynon) were heavily represented on the SLOC, gay and lesbian Utahans had some basis for their assumptions. The church, after all, has had a long-standing history of intolerance toward gays and lesbians.

Michael Marriott, the ex-Mormon executive director of the Orem, Utah-based B.W. Bastian Foundation, which supports gay rights, was involved in the first meetings with Eynon as one of the representatives from the gay community. He explains, “There was an unhappiness because they didn’t reach out to the LGBT community at first. We had to go to them and say, ‘We want a seat at the table.'”

The LGBT group wanted three things from the Olympic organizers: They wanted a representative on the diversity committee; they wanted the SLOC to do workforce recruiting directly within the LGBT community; and they wanted access to foreign LGBT athletes and their families so that they could offer housing and other services to them during the games.

Eynon agreed to everything. “They were shocked,” he says.

The SLOC appointed two representatives to serve on the volunteer recruiting committee. One person—Marriott—was tapped to represent gays. Salt Lake attorney Laura Miliken Gray was selected to represent the lesbians. Eynon also connected them with the director of international athlete services so they could reach out to LGBT athletes in other countries. In addition, SLOC set up volunteer recruiting booths at the Utah Pride festival and the Utah Gay Rodeo. It held job fairs at the Gay and Lesbian Community Center. It even recruited volunteers in gay bars to make sure that the LGBT community was represented at the Games.

A decade later, Gray still has her blue Olympic volunteer parka—the very same coat that Romney is pictured sporting on the cover of his 2004 book, and she credits Romney for the extensive LGBT involvement during the Salt Lake Olympics. “My impression during the Games was that he was a fair minded and inclusive person,” she says. “That’s what was portrayed to us, and that’s what occurred under his command.”

The Mitt Romney who put on the world’s most gay-friendly Olympic games is a far cry from the candidate running for president in 2012.

During his tenure at the SLOC, Romney even toured Salt Lake’s gay community center. He had been at a meeting next door with the local ACLU, which Dabakis (now head of Utah’s Democratic Party) also happened to be attending. After the meeting, Dabakis recalls, “I said, ‘Mitt! Come on over. I want to show you, we have a very nice facility with a coffee shop and library.'” Romney got the full tour. “He wasn’t reluctant. He said ‘great job,’ or something, and then zoomed off to wherever he was going.” Romney gives the tour a glancing reference in his 2004 book, describing his effort to personally recruit gays and lesbians at the center.

Not long before the opening ceremony, the Gay and Lesbian Times noted approvingly that the Salt Lake Olympics “will go down as one of the most-gay inclusive Olympics to date.” The nation’s largest gay rights organization, the Human Rights Campaign, issued a press release praising the Salt Lake organizers for their LGBT outreach: “Not only did they appoint two representatives to the volunteer committee, they asked GLBT community members to participate in a minority/cultural committee.” At the games, LGBT volunteers were involved in everything from working as translators to parking cars to working security details to managing volunteers for an entire venue.

And what did Romney think of all of this? “Mitt was very, very supportive of increasing the diversity of the workforce,” Eynon says. “He was proud that we met with these various groups and had them on committees. He was very appreciative and very complimentary.” A few years later, Eynon urged Romney to tell the full story of the SLOC’s successful gay outreach in his book, but Romney ended up including only the brief mention of his visit to the LGBT community center.

The Mitt Romney who put on the world’s most gay-friendly Olympic games is a far cry from the candidate running for president in 2012. He now vows to oppose gay civil rights efforts. He supports the federal Defense of Marriage Act, which the Obama Justice Department has deemed so discriminatory towards gays and lesbians that it’s unconstitutional. He has condemned Obama’s repeal of Don’t Ask, Don’t Tell.

The transformation hasn’t been lost on Utah’s LGBT community. Marriott, who served on the SLOC diversity committee, is distantly related to the same Marriott family that owns the hotel chain and which has heavily backed Romney’s campaign. (Mitt is even named after a Marriott.) He calls Romney’s shift “an unfortunate turnabout.” Still, Marriott appreciates what Romney did in Salt Lake. “The Olympics definitely changed Utah and Salt Lake for the better,” the gay rights activist says.

Gray, too, is disappointed in Romney. “We were good enough to volunteer at the Olympics,” she laments, “but we’re not good enough for equal rights now.”