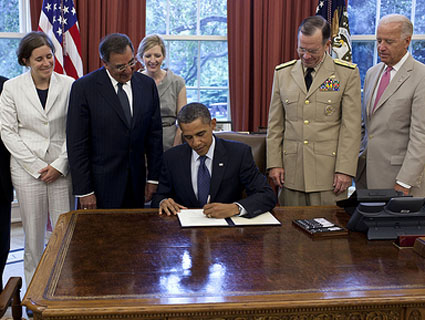 President Barack Obama signs the certification of the repeal of the military's Don't Ask Don't Tell policy in 2011. <a href="http://www.flickr.com/photos/whitehouse/5965366074/sizes/m/in/photostream/" target="_blank">Flickr/White House</a>

On Wednesday afternoon, President Barack Obama finally evolved into a supporter of same-sex marriage—but only for those Americans who live in states where gay marriage is legal:

“I have to tell you that over the course of several years as I have talked to friends and family and neighbors when I think about members of my own staff who are in incredibly committed monogamous relationships, same-sex relationships, who are raising kids together, when I think about those soldiers or airmen or marines or sailors who are out there fighting on my behalf and yet feel constrained, even now that Don’t Ask Don’t Tell is gone, because they are not able to commit themselves in a marriage, at a certain point I’ve just concluded that for me personally it is important for me to go ahead and affirm that I think same sex couples should be able to get married,” Obama told Roberts, in an interview to appear on ABC’s “Good Morning America” Thursday. Excerpts of the interview will air tonight on ABC’s “World News with Diane Sawyer.”

The president stressed that this is a personal position, and that he still supports the concept of states deciding the issue on their own. But he said he’s confident that more Americans will grow comfortable with gays and lesbians getting married, citing his own daughters’ comfort with the concept.

Cheney served in an administration that was extremely hostile to gay rights. With the repeal of Don’t Ask Don’t Tell, the administration’s refusal to defend in court the federal ban on same-sex marriage, and Wednesday’s endorsement of same-sex marriage federalism, Obama is the most pro-LGBT rights president in US history. Nevertheless, the position he articulated today accepts the legitimacy of states like North Carolina subjecting the rights of gays and lesbians to a popular vote.

In other words, Obama has left room for more evolution.

UPDATE: After Obama’s announcement, Mother Jones‘ David Corn spoke with an administration source and asked whether the president recognized gay marriage as a right. The official replied, “He has always said that it is a state issue, and he’s not suggesting changing that. He did not support the North Carolina amendment, but he’s not saying he will bring up a piece of federal legislation on gay marriage. This is how he feels himself about the issue, and he leaves it to the states.”