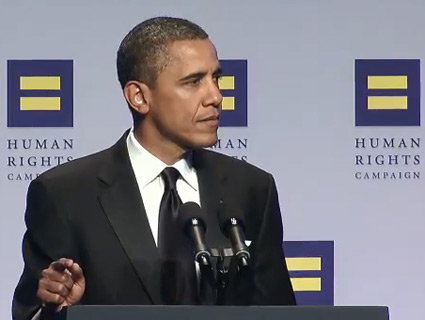 For the past several days, the politerati have been abuzz over this matter, after Vice President Joe Biden appeared on Meet the Press and, in response to a question, said he was for marriage equality. An impassioned Biden declared he was “absolutely comfortable” with gay marriage. This detonated a media frenzy. The next day, reporters hurled questions at White House press secretary Jay Carney about the president’s neither-for-nor-against-but-evolving position. The headline on a Washington Post piece by Dana Milbank described Biden’s comment as a “gaffe” that was a “mess for the White House.” Meanwhile, Secretary of Education Arne Duncan, during a Monday interview, noted that he, too, favored gay marriage. Why have you not said so before? he was asked. No one had bother to inquire, Duncan replied.

Speculation exploded. Was the White House mounting an orchestrated campaign to pave the way for an Obama declaration of support for same-sex marriages? And if so, why? Gay and Democratic activists had been threatening to wage a platform fight at the presidential convention this summer over a pro-gay marriage plank. Was Obama now taking steps to avoid such a made-for-cable fuss?

In Washington, the first question always is, what’s the political gain? But in this instance, despite all the hypothesizing, that was not obvious. Specific Obama constituencies could be expected to be heartened by this announcement: the gay rights community, fundraisers (one of six Obama bundlers are openly gay), and young voters. But same-sex marriage does not generally poll well among African-Americans and Latinos, two voting blocs Obama must rev up in November.

A recent Gallup poll found that half of Americans believe same-sex marriages ought to be recognized by law as valid. But how does this play in the swing states that will decide the election? On Tuesday, North Carolina voters (in a low turn-out affair) decisively passed a measure that would amend the state constitution to ban gay marriage, which is already illegal in the state. Is that an indication that Obama could suffer in this critical state—where the Democrats will hold their convention—for endorsing gay marriage? Six other swing states already have constitutional bands on gay marriage: Colorado, Florida, Nevada, Ohio, Virginia, and Wisconsin. Four do not: Pennsylvania, New Hampshire, Iowa, and Arizona. A poll in Arizona found voters split on the issue. In Iowa, a survey found only 38 percent backed a state constitutional amendment to prohibit gay marriage; 56 percent opposed the ban. (By the way, since 1998 voters have gone to the polls 32 times to vote on gay marriage—and have each time opposed it.)

There are multitude of ways to spin all this. Voters who care about same-sex marriage may not be influenced by Obama’s decision. Those who favor gay marriage already knew—or suspected—Obama was with them; those against it probably already opposed Obama for (among other things) his support of other gay rights measures. Then again, perhaps this could provide social conservative voters not enthused about Mitt Romney with more cause to join the fray. Remember those evangelical mega-churches in Ohio that were crucial to George W. Bush’s 2004 victory?

In any event, the most solid analysis of how Obama’s decision will impact the election is likely this: who knows? Democratic sources close to the White House and the Obama campaign tell me that this certainly wasn’t a carefully planned endeavor on the president’s part. One well-informed Obama insider put it this way:

Biden created a swirl of new questions and the president doesn’t like for people to be confused about where he stands…The politics is complicated, though. While people are more and more copacetic with marriage equality, it’s not necessarily something they want the president spending his time on. So it isn’t necessarily a slam dunk regardless of what he does. As always, between the politics, the voters, the media, and the president’s closest supporters, there are a lot of needles to thread here.

Gay marriage, it seems, was a looming dilemma for the president. Biden’s unplanned comments placed this challenge on the center stage, and the president and his aides decided now was the time to confront it, realizing the political consequences could be mixed. Obama may have just figured it was time to come out on gay marriage and then he’ll take it from there.

UPDATE: Asked about the timing of Obama’s announcement, a White House official tells me that “this was something the president has been thinking of doing for several months. He spoke a lot with Mrs. Obama. He gave a lot of thought to this. He saw his daughters being friends with children with same-sex parents. He saw what was happening at the state level in New York and elsewhere. This has all been informing his thinking for months, and he had planned to do something prior to the convention.” Did Biden’s remarks speed up the process? “That made it happen sooner than later,” this source says.