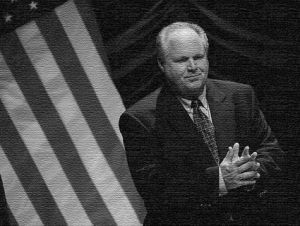 His misogynistic assault on Georgetown University law student Sandra Fluke indicates that he does.

Fluke, who was prevented from testifying at Rep. Darrell Issa’s nearly all-male hearing on contraception, has been the target of a barrage of sexist invective from Limbaugh over her view that Georgetown’s health plan should include birth control. Wednesday Limbaugh called Fluke a “slut” and a “prostitute”, declared that “she’s having so much sex she can’t afford the contraception,” and asserted that covering contraception was tantamount to paying her for sex. On Thursday he blurted out: “If we are going to pay for your contraceptives, and thus pay for you to have sex, we want something for it, and I’ll tell you what it is. We want you to post the videos online so we can all watch.”

Once you wade through the bile and the realization that the country’s most popular conservative radio host has devoted hours on his show to attempting to bully a woman into silence for her views on birth control, it becomes clear that Limbaugh, a man over 60 who is now on his fourth marriage, does not seem to understand how birth control pills work. On Wednesday and Thursday, Limbaugh repeatedly suggested that the amount of sex a woman has is related to the amount of birth control she needs to take, as though women took birth control pills every day they had sex. This is how, say, Viagra, the erectile dysfunction medication, works. Aside from the morning-after pill*, when and how much sex you have is unrelated to the amount of birth control you need.

Limbaugh is a figure of almost religious stature among conservatives—for Republican elected officials, criticizing him is particularly dangerous—so Republican lawmakers have largely remained mum on Limbaugh’s despicable tirades. Some conservatives have tried to defend Limbaugh, however, arguing that his analogy, while crude, gets to a legitimate concern over whether religious organizations and insurance companies should have to “finance” someone else’s “sex life.“

It’s almost surreal to have to point out that regulating pregnancy is a legitimate medical need. Unlike erectile dysfunction drugs, whose sole purpose is to facilitate sexual activity, birth control has other legitimate medical uses beyond preventing pregnancy. It mitigates menstrual pain and helps women regulate their cycles, which is why many women use birth control even if they are not sexually active or have never had sex. In her prepared remarks, Fluke tells the story of a lesbian friend who lost an ovary due to polycystic ovary syndrome, which could have been treated with access to birth control. As Fluke dryly points out, her friend was not trying to avoid pregnancy.

The “subsidizing-your-sex-life” argument Limbaugh is making is related to, but nevertheless distinct from, the religious objection to birth control. The US Conference of Catholic Bishops has opposed even allowing insurance companies to foot the bill for contraception for employees of Catholic institutions. However, it has no objection in principle to prescription drug coverage that includes Viagra. Neither, one assumes, does Rush Limbaugh. So if he wants to contend that covering birth control is akin to paying women for sex, let’s hear him explain why men who want their insurance to cover their erectile dysfunction pills are not “sluts” or “prostitutes.”

Correction: I initially misread the government’s advice on contraception; it is perfectly safe to take Plan B when you’re already on the pill.