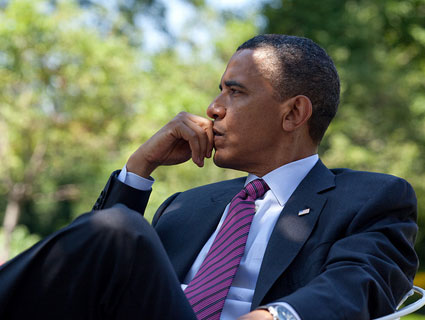 On Wednesday, I noted that Rush Limbaugh’s latest stereotypical race parody featured President Barack Obama as blaxploitation detective John Shaft, even though just about the only two things they have in common is that they’re both black.

Ta-Nehisi Coates observes that Michael Moore and Bill Maher, in expressing their disappointment with Obama, embrace the same basic idea. Unable to limit their criticisms to Obama’s politics, on The View, (in a clip flagged by Angry Black Lady) Moore repeated Maher’s statement that “I went into the polls voting for the black guy, and what I got was the white guy.” Coates writes:

I know Michael Moore and Bill Maher think this is a great line…But it really isn’t. In fact, it’s racist, and Michael Moore would do well to stop repeating it. It really is no better than the Kenyan anti-colonial bit, and in fact is good deal worse. I said this yesterday on twitter, but it would be as if my Jewish accountant messed up my taxes and I said, “Dude, you’re Jewish, what the hell?!?!”

One commenter on the post asks, “Did they think they were voting for Shaft?” Maher and Moore wish they had, and Limbaugh thinks they did.  The difference is that Limbaugh doesn’t seem capable of discerning between Obama and the black monsters of his own fevered imagination, while Maher and Moore are depressed that Obama doesn’t embody the stereotype.

What Limbaugh, Moore and Maher all have in common is a common, reductive expectation of what a “black man” is supposed to be—aggressive, belligerent, intimidating—and Obama doesn’t fit the bill. All three are embracing a paternalistic social tyranny of trying to define the acceptable limits of people’s behavior based on their racial background, something that still happens even in America even if you end up being president of the United States. If you’re president, though, it’s much easier to just brush your shoulders off—dealing with those kind of expectations when you’re an average person is considerably more difficult. Especially when the “liberals” are the ones saying stuff like this.