I have no idea what Rick Santorum told the crowd at Reising Sun Cafe in Polk City, Iowa, this morning. My guess is the former Pennsylvania senator’s message was a lot like the one he’s brought to Iowa’s other 98 counties—he’s a consistent social conservative, architect of the partial-birth abortion ban, Iran’s worst nightmare, and a culture war veteran with the scars to prove it. But the diner was impossibly small, and so I was left standing outside in the Arctic chill with about 50 supporters and undecided voters, and maybe half as many press. Santorum was just a side-show in Polk City, though. That’s because the Duggars showed up.

That would be the Duggars of 19 Kids and Counting fame, a conservative Christian family from Arkansas. Twelve of the 19 Duggar children are with their dad Jim Bob in Iowa campaigning for Santorum, all dressed in their Sunday best—the girls in ankle-length skirts and the boys with shirts-and-ties. Everyone knows who Jim Bob Duggar is, but he introduces himself to everyone who walks up to him nonetheless: “I’m Jim Bob Duggar, and we have a show called 19 Kids and Counting.” The Duggars duck into a boutique shop next door to the Santorum event and the whole gang takes turns posing for photos with Santorum volunteers and fans. “There’s Josiah, he’s got a gray jacket!” a woman says, pointing at one of the older Duggar boys. “I watch that show all the time. They’re really strong Christians. I love them,” says another. 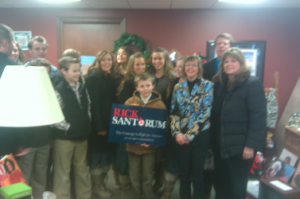 “Everyone say ‘Pick Rick!'”: Tim MurphyMeanwhile, Jim Bob holds court. “Rick Santorum is someone with a proven track record to stand up for what’s right, for lower taxes, less government intervention in our lives. He’s always been an advocate for the unborn. He’s somebody that he authored the bill that banned partial birth abortion. That’s something that nobody else can say. Whereas Mitt Romney, when he was governor of Massachusetts, he set up a Romneycare program, and included a program where any girl could go in and get an abortion for $50.” (Full context here.)

In 2008, he and the family (there were only 17 kids then) traveled to Iowa ito volunteer for Mike Huckabee and, truth be told, Jim Bob would have preferred the Arkansas Governor run again. “We begged Huckabee to run this time, but he felt that this was not the time for him to run,” he says. “So we’ve been looking for a candidate that has our values, and somebody that’s articulate, that has energy, that has a proven track record to do what’s right—and Rick Santorum’s the man.” They plan on checking out a few more events, and then hitting the phone lines on Santorum’s behalf. Jim Bob’s oldest son, Josh, a car dealer, came up with the idea to rechristen the family bus the “Santourin’ Express,” and the thing looks so official—the candidate’s website is splashed in big letters on both sides—that a few voters walked up to it expecting to meet the candidate.

In finail days before the Iowa caucuses, campaigns have dispatched their surrogates to Iowa in droves. Chris Christie parachuted in for Mitt Romney. Rand Paul’s stumping for his dad. Rick Perry’s campaign dispatched Louisiana Gov. Bobby Jindal and Kansas Gov. Sam Brownback. They’re effective in their own way, but the Duggars represent a unique form of micro-targeting that’s perfect in Iowa. Like Santorums—and a disproportionately high number of Iowa conservatives—the Duggars home-school their kids in order to provide them with an education based on Christian principles. (Of the Santorum supporters I spoke with in Polk City, Michele Bachmann, another home-schooler, was the overwhelming second choice.) Home-schoolers helped push Huckabee over the top in 2008; if Santorum pulls an the upset on Tuesday, he’ll have folks like Jim Bob to thank.