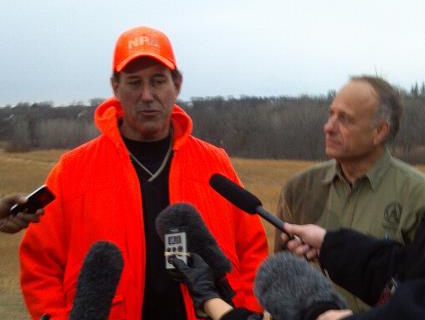 Outside Doc’s Clubhouse in Adel, Iowa, on Monday, Rick Santorum sported a bright orange Cabella’s suit and matching NRA hat as he chatted up reporters. The presidential candidate joked about his “four clean kills” on the day’s pheasant and quail hunt, and his weight: 211 pounds. Santorum recently lost a dieting competition to Iowa Rep. Steve King, who joined him on the pair’s second hunt in recent months. But the GOP underdog, who’s running sixth in the state behind Michele Bachmann, was less than candid about the expectations game a week ahead of the January 3 caucuses.

Santorum, who has made a point of visiting each of Iowa’s 99 counties but remains the only serious contender in the state who has yet to take a turn as the front-runner, said he sees the caucuses as three competitions in one. The first is among libertarians, “which Ron Paul is going to win.” The second is the moderate primary, “which Gingrich and Romney are scrumming for.” Then there’s the “non-Newt-Romney” bloc of real right-wingers, in which Santorum hopes to edge out Bachmann and Rick Perry. But even if he loses that contest, he may stick around. “I think you could have a bunch of folks all packed together…and first, second, third may not mean as much as how well you do,” he told me.

After receiving the endorsement of Bob Vander Plaats, an anti-gay campaigner who spearheaded the effort to oust three gay-marriage-supporting Iowa Supreme Court justices last year, Santorum has been trying to convince the media that he’s due for a turn for the spotlight. Maybe it’s working: “It’s his bubble at last,” I overheard a journalist from the conservative news magazine American Spectator say later as he wrote his story. (It’s also worth mentioning that social conservatives have historically outperformed polls in Iowa.)

But Santorum is still vying for an endorsement from Rep. King, a big deal in deep-red western Iowa. After Santorum dismissed concerns that Vander Plaats improperly requested money from candidates in exchange for his endorsement, King was asked whether he would pick a candidate in time for the caucuses. “I want my head and my heart to come together, and when that happens, and if that happens, I’ll jump in with both feet,” he replied.

As Santorum made his exit, reporters in tow, I asked King if he thought that would happen in time. “It’s kind of hard to plan a conviction, but yes,” he told me.