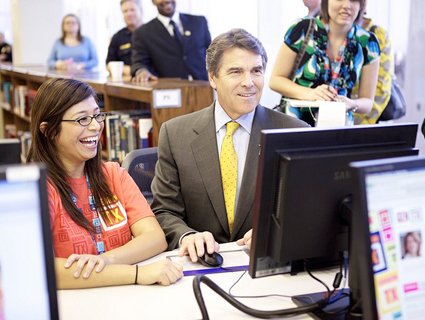 Texas Governor Rick Perry caused a hulabaloo this week when he revealed to the campaign press what Texans have known for a decade: He’s really not that into science. Evolution, he told a 9-year-old New Hampshire boy on Thursday, is just “a theory that’s out there,” which is why, “in Texas, we teach both creationism and evolution in our public schools.” That came just one day after Perry revealed that the world’s climatologist are engaged in a sweeping conspiracy to manipulate data to “keep the money rolling in.”

But the GOP presidential candidate, who once appointed a creationist dentist (and fellow Aggie) to head the State Board of Education, has long been a public opponent of evolution, both in his policies and his rhetoric. As he explained last year, “I am a firm believer in intelligent design as a matter of faith and intellect, and I believe it should be presented in schools alongside the theories of evolution.”

According to Supreme Court, public schools cannot teach creationism as science, and according to the state’s most curriculum standards they’re not supposed to either—which makes Perry’s statement that Texas schools do teach creationism all the more noteworthy. Over at the Texas Observer, Forrest Wilder recounts the governor’s history of appointing … let’s say “scientifically-disoriented” officials to scientifically-oriented agencies like the Texas Commission on Environmental Quality, and then offers some personal experience:

Regardless of what the official curriculum is, there are teachers in Texas who do teach creationism. I know, because I had a teacher that did so in my Central Texas high school. She proudly displayed a bumper sticker on her podium that read something like, “Big Bang Theory: God Said ‘Bang’ and There it Was.” Her students picked up on her creationist catch-phrases—”Can’t make a chain out of missing links”—and took pity on us in the AP biology class, where evolution was taught as the cornerstone of biology.

Maybe this is what Rick Perry meant when he said “we teach both creationism and evolution in our public schools.” Creationism *is* taught occasionally; it’s just that it’s not supposed to be.

And then there’s this, from PolitiFact:

Penn State University political scientist Eric Plutzer, who helped conduct a 2007 national survey of more than 950 science teachers in 49 states, including Texas, told us in an interview that in any state 10 percent to 20 percent of science teachers are “endorsing creationism in their classrooms, often devoting one to four class hours to creationism over the course of the year.”

A synopsis of the survey, published in the Jan. 27, 2011, issue of Science magazine, says a “sizable number of teachers expose their students to all positions — scientific or not.”

Plutzer told us: “One thing you can be certain of is that large numbers of public school science teachers in Texas are endorsing creationism.”

Right. Chiding Perry on the facts in this case misses the point, because Perry wasn’t revealing his ignorance; he was accidentally speaking the truth. Perry knows you can’t put creationism in textbooks outright—Kitzmiller v. Dover took care of that—but the education agenda he supported was designed to achieve the same ends through a more roundabout process of enabling teachers to shoot holes in biology or making them so nervous about the subject that they avoid teaching evolution entirely.