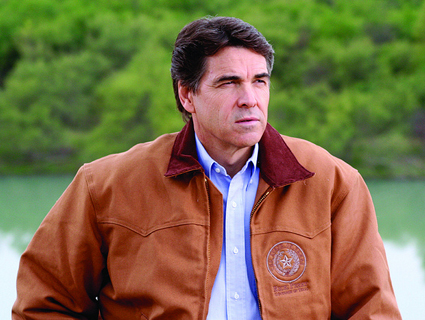 One of Texas Gov. Rick Perry’s biggest alleged weaknesses in the Republican presidential primary is his less-than-draconian record on immigration. Although Perry has talked a lot about cracking down on undocumented immigrants, he has done little to change Texas’ status as a “sanctuary state” and, indeed, he’s explicitly rejected the idea of implementing Arizona-style immigration reform. The reason for this is pretty simple: Texas’ economic “miracle” is built on on a continued influx of people, as well as a preponderance of low-wage jobs, especially in the housing sector.

That’s pragmatic, but today’s conservative base isn’t looking for pragmatism. So will any of Perry’s rivals for the nomination take the bait and attack Perry from the right? Well, here’s Rep. Michele Bachmann (R-Minn.) today in South Carolina:

Bachmann said lax enforcement of immigration laws was a threat to the nation’s security. She agreed with a town hall questioner at a Greenville stop that US troops should be redeployed from South Korea to south Texas.

“How do you solve it? You build a barrier, a fence, a wall—whatever you want to call it. You build it,” Bachmann said. “As president of the United States, every mile, every yard, every foot, every inch will be covered on that southern border.”

The “problem is not our laws on immigration,” Bachmann said. “The problem has been in our unwillingness to enforce the laws that are on the books.” South Carolina legislators this year passed one of the nation’s toughest illegal immigration laws. It goes into effect in December.

What, no alligators? The conservative group Americans for Legal Immigration, for one, concluded that “Michele Bachmann is the first presidential contender of the 2012 race to make border security and illegal immigration a top issue for her campaign.”

But without telling anti-immigration groups how to do their job, this doesn’t seem quite right. For one, Bachmann hasn‘t made this a top issue for her campaign; her comments came because she was specifically asked a question about enforcement of immigration laws. Herman Cain, meanwhile, has already made the exact same point, calling for a Great Wall of China-style barrier to be constructed along the southern border. And take a look at this guy:

The larger issue here is that every GOP presidential candidate is going to say more or less the exact same thing when it comes to immigration: Secure the border first, and then talk about reform. Enforce the existing laws. Get tough with employers. Etc. Perry’s defense of his nonaction in Texas is that it’s Washington’s fault—which is also his argument about everything else. There are policy differences on immigration between Perry and other members of his party, but I imagine Perry’s response will just be to run for B-roll footage of him standing by the border in a big brown jacket. It hasn’t failed him yet.