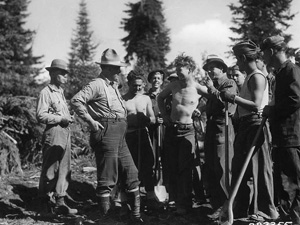 Recently, I went camping in Virginia’s Westmoreland State Park, which was created in 1936, in the midst of the Great Depression. To fix up the parkland and to make it accessible as a recreation area, the state called in Franklin Roosevelt’s Civilian Conservation Corps (CCC), which built campgrounds and modest cabins that offered state residents the opportunity of cheap recreation and fresh air.

Nearly 80 years later, the cabins are sill standing as an incredible legacy to Roosevelt’s approach to massive unemployment in the 1930s. They are reminders of a bygone time when public officials deemed massive unemployment sufficient grounds to spend money putting people on the public payroll until the economy recovered. Such an idea today seems almost unimaginable. Presently, all the political solutions to high unemployment seem confined to such a narrow set of ideas: tax credits, tax cuts, and now, budget cuts, too.

But no one ever built a campsite with a tax cut. All of the ephemeral efforts the federal government has tried in the past two years to jumpstart the economy may have resulted in massive corporate profits, but they have done little to put people into jobs. The unemployment rate has stuck where it is at nearly 10 percent, and there’s not much in the works that suggests it will improve any time soon. More than 5.5 million people are unemployed and not receiving any sort of unemployment benefits. By January this year, about 1.4 million people had been unemployed for more than 99 weeks, and lots of them were over 45.

You’d think that now might be a good time to revisit some of the old temporary jobs programs like the ones that built the Westmoreland State Park. After all, government money spent employing people on major public works projects has one of the biggest stimulative effects on the economy of any of the options considered two years ago in the Obama stimulus package. For every tax dollar spent on infrastructure, the economy gets a $1.59 boost in GDP, according to Mark Zandi, the chief economist at Moody’s Analytics.

But Republicans have taken their Ayn Rand philosophy to the extreme, and many Democrats have fallen into line, so that any consideration of public works for the common good is simply off the table. Not only are new projects out of the question, but already, Republicans, along with Obama, too, have taken a whack at the one remaining program that resembles the old CCC: the Corporation for National and Community Service.

The corporation is the nation’s largest public service organization, whose best-known program is AmeriCorps (basically a domestic version of the Peace Corps). It provides jobs to about 100,000 people, many of whom are recent college graduates facing one of the worst job markets of any recent generation. AmeriCorps volunteers receive a small stipend for their service and about $5,000 towards college costs. They build houses for Habitat for Humanity, tutor poor inner city kids, clean up parks and serve meals to old people. AmeriCorps volunteers were on the ground in a flash after the Joplin, Missouri tornado, staffing a missing persons hotline and helping with the recovery. It’s stuff like that that’s earned the program bipartisan support over the years.

At least it did. In April, House Republicans pushed through a nonbinding resolution calling for the elimination of the funding for CNCS, and for a while, it looked like the program would be killed off entirely. In the end, the organization was spared, but the final deal brokered to avert a government shutdown over the fiscal year 2011 budget cut CNCS’s funding by about 6 percent, or about $75 million, resulting in the loss of 6,000 AmeriCorps positions. Rep. Paul Ryan’s 2012 budget proposal calls for defunding CNCS completely.

The first wave of cuts is already starting to have an impact, as dozens of nonprofit programs that relied on AmeriCorps and CNCS volunteers are closing their doors. For instance, the state of Pennsylvania has zeroed out its Pennsylvania Conservation Corps, which, among other things, provided workers who helped fight the spread of invasive plants that were choking off area waterways and staffed community mental health centers and boys and girls clubs.

Hardest hit have been programs involving seniors. About $12 million of the corporation’s budget cut came from the Retired and Senior Volunteer Program, which helped recruit and field volunteers for a host of community programs. Those programs are about to disappear everywhere from Fort Dodge, Iowa to the Conejo Valley, California. Lots of those volunteers were working in places like food pantries that have become swamped during the recession.

Kevin Jennings is the outgoing head of the Department of Education’s Office of Safe and Drug-Free Schools. He’s leaving the Obama administration to head up the nonprofit group Be the Change, which is launching a new offensive to combat economic inequality. One of his first objectives in the new job, he told me recently, is to save the Corporation for National and Community Service. The attack on the service agency, he says, is “the most short-sighted, idiotic cut I’ve ever seen.”

With Republicans and tea party conservatives advocating an “every man for himself” approach to economic recovery, it’s likely to be an uphill battle. It’s unfortunate, because, as Franklin Roosevelt showed, putting people to work for the common good in hard times can have a tremendous, long-lasting impact. Eighty years from now, it’s hard to imagine happy campers frolicking the woods or kids enjoying well-maintained public schools because of public service work their grandparents did when they couldn’t find decent jobs.