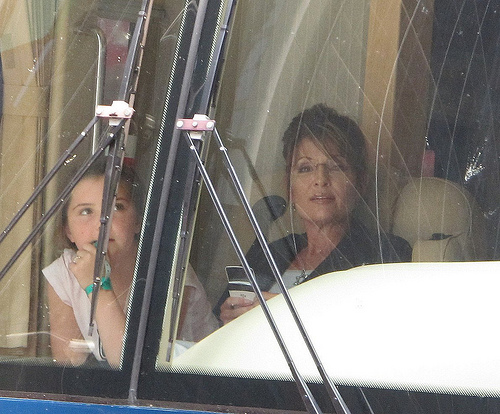 Sarah Palin’s bus tour has been the subject of much chatter of the “will-she-or-won’t-she” variety. But it’s also raised the ire of one congressional Democrat, who yesterday expressed concern that National Park Service resources had been improperly used during her stops at historic sites.

In a letter to Park Service Director Jonathan Jarvis on Tuesday, Rep. Earl Blumenauer (D-Ore.) cited “serious concerns about the use of federal resources in conjunction with the ‘One Nation’ partisan political tour” that Palin recently undertook. “Many of the press accounts of stops included in this tour, which provided personal and political benefits to former Gov. Palin, suggest that National Park Service resources were made available to an extent beyond that which an average American family would receive,” wrote Blumenauer. He cites press accounts of a private tour of Mount Vernon and other Park Service properties, a 10-person escort that included park rangers and the NYPD at the Statue of Liberty, and early admission to the National Archives. He asked what, if any, additional personnel were required for these visits, or whether staffers had diverted to accommodate Palin.

He also pointed to a passage in a Washington Post story last week that mentions the burden on the Park Service:

The bus tour has also required some planning and preparation by the historic sites that received her. Left as much in the dark about her itinerary as were the public and the media, officials with the National Park Service began preparing for a possible Palin visit when they began reading news reports about her planned bus tour.

The Park Service responded to the letter, telling Politico that Palin was treated like any other celebrity visitor.

National Park Service spokesman Jeffrey Olson said his understanding is that Palin received customary treatment for a visiting celebrity and that the costs of her visits were nominal at best.

“We see celebrities on a regular basis, it’s something that we’re used to,” Olson said. “We give them a tour but we also try to not make it a big hoo-ha for all the other visitors. So it’s kind of standard fare if there’s a celebrity or two that show up we do a special program for them.”

That usually involves rangers and interpreters that are on the job regardless. “That’s why it’s not an extra cost for us,” Olson said. “We just try to make sure everybody has a good experience at a national park.”

Yes, but not every other celebrity is using the nation’s historic sites as a backdrop for a not-so-subtle-test-run of a presidential bid. Palin has responded, via Twitter of course, by mocking “Politico’s crack investigative reporting.”