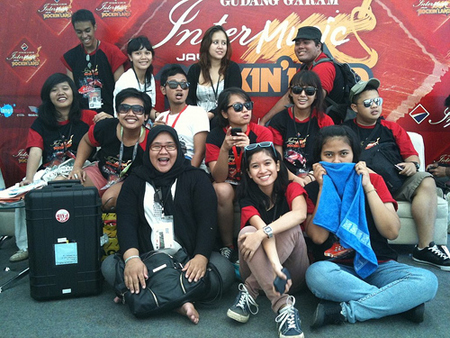 Neon Trees, a Mormon pop rock band, catapulted into the hearts and ears of earnest rockers with its #1 Billboard single, “Animal.” To fend off the show biz temptations that accompany hordes of screaming fans and nationwide tours, all of its members have stuck to their Church of Jesus Christ of Latter-day Saints roots. The group won the 2008 Real Noise anti-tobacco contest, and have spoken out about being good role models for their fans. Drummer Elaine Bradley told the Mormon Women Project: “I definitely think about how my actions represent Mormonism—I think it would be irresponsible and sloppy of me to assume that I don’t have an effect on people.” Singer Tyler Glenn was even more explicit: “Things we didn’t want to be a part of were alcohol and tobacco campaigns…we’re starting to attract fans of all kinds of ages, and so it’s something we’ve decided to not support.”

But now the group is on the line-up for the Java Rockin’Land festival in Jakarta, Indonesia, a popular music event that’s projected to draw a crowd of 60,000 and is currently backed by one of the largest producers of clove cigarettes, Gudang Garam. Last time we checked, cigarettes don’t fly in the house of Mormon, so what are Neon Trees doing there?

Marita Hefler, a PhD candidate in Public Health at the University of Sydney, launched a Change.org petition pressuring the bands slated to perform at the festival to protest Gudang Garam. Via Twitter, she urged Bradley to consider how the cigarette company will use Neon Trees’s performance to reach hundreds of potential smokers. Bradley finally replied: “I hear you. It’s less than ideal. You can stop Tweeting me about it.” Hefler told Mother Jones: “We thought the social activism of many of the bands, in particular the public stance of Neon Trees against tobacco, meant they would be horrified to learn they were part of a tobacco promotion, and would immediately take steps to remove the association…obviously we were wrong.”

Hefler has good reason for concern: More than 37% of Indonesian high school and university students smoke, and 3 out of 10 started when they were just ten years old. Confusion in the country about tobacco’s carcinogenic effects have meant that it’s even been touted as a cancer cure. Indonesia is one of the only countries in the world that has not signed the WHO’s Framework Convention on Tobacco Control, and Indonesian companies have an easier time directly marketing their product. At last year’s Java Rockin’Land, a Garam promo girl spoke to Angela Dewan from Hack about her job: “We walk around selling cigarettes and at some events we give them out for free to over eighteen-ers…I guess I should feel guilty about promoting cigarettes, but I don’t plan on doing this forever, I’ll probably stop when I’m about 30.”

This isn’t the first time the venue has come under fire for the tobacco sponsorship. Aussie band Wolfmother came close to dropping their spot in the line-up back in 2010, but they decided to go forward anyway, reasoning: “this one is for the fans in Indonesia who have parted with their very own cold hard cash to see Wolfmother. ” If Neon Trees truly cared about their fans, they might go the way of pop star Kelly Clarkson, who forced an Indonesian company promoting her show to remove cigarette company logos from billboards. But so far, there’s been no sign that the band intends to back out.

Neon Trees is not the only member of this year’s line-up who’ve touted public health elsewhere and dropped those concerns once setting foot on Indonesian soil. Among the bands set to perform, Good Charlotte’s singer Joel Madden is a UN Goodwill Ambassador, 30 Second to Mars’s front man Jared Leto supports The Art of Elysium, a nonprofit that helps children battling severe medical conditions, and the UK’s Blood Red Shoes DJ’d at a No Surrender cancer charity event. According to Hefler, the lack of consistency in these bands’ messages poses a big problem for young Indonesian fans: “Seeing their favorite band perform under tobacco sponsorship reinforces the notion that smoking is relatively harmless, particularly if their Indonesian fans know about the charity work they do elsewhere,” she says. If they cared so much about philanthropy, “Why would they promote the world’s deadliest drug to their fans in Indonesia?”