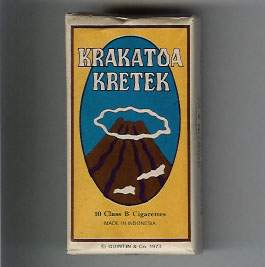 Walking home from high school one day during freshman year, I ran into my sometimes friend Michel Finzi with his sidekick, a smart-ass kid named George who played in the school band. Finzi, a good-looking French kid who was always regaling me with stories of the girls and surfing at Cape Cod, a world totally foreign to me, was smoking something enticingly pungent. “What’s that?” I asked.

I took a drag of the sweet, heavy smoke, and after about five seconds was floating pleasantly. “Cool,” I said. So Finzi, who was headed the other way, generously gave me my own to smoke. By the time I got home, I’d finished about half of it and was feeling pretty damn sick. Had to lie down a while.

Thus began my occasional affair with clove cigarettes. But never again did I smoke one alone. A complex etiquette developed among my close friends. A clove had to be shared with others. Spoken of in codes. Symbols on the package took on special meanings. One could not smoke it past a certain point. One could never ask for a lit clove, reach out for it, or even eye it furtively in the hands of another. It could only be offered. But woe befall those who would Bogart it—hold it longer than the others deemed appropriate. For that sin, you risked ignominy.

Naturally, the clove cigarettes proved a gateway to other niche tobacco products such as the oh-so-pretentious Sobranie Black Russians, black with gold filter tip, sold in wide, flat boxes; or the diminutive bidis—little Indian jobs made from single rolled up leaves. Such exotic items were a way to seem, maybe even be, a little different for a while, something to set the punky drama kids apart from the jocks and Deadheads who sucked down their Camels and Marlboros. Somehow we felt more creative, pensive, literary, raising a thoughtful middle finger to the popular crowd and the repressive establishment that we would never join. So what if cloves and bidis were more dangerous than regular cigs. We were gonna live fast and die young anyway.

Of course, we were mostly full of shit, just like the high-school outsider kids I still see smoking their Djarums and experimenting with eyeliner. But it looks like my kids will have to find their own pretentious high school rebel props. As of today, the Food and Drug Administration has officially shut the door on clove cigarettes, along with all other flavored cigarettes (other than menthol), deeming them an effort to market tobacco to children. (Damn right they are.)