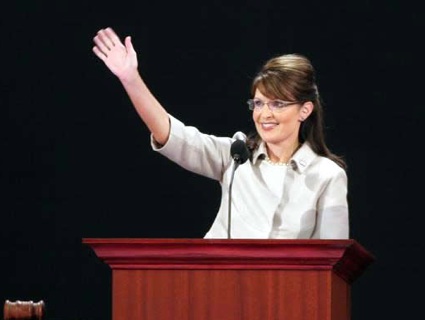 In just a few short hours, you should know for sure whether or not you’ve ascended into Heaven, or been left behind (San Francisco, that means you!) to fend for yourselves as the armies of darkness descend upon the Earth in advance of the Tribulation. Politics can seem downright trivial as you nail down the last-minute details—purchasing an insurance policy for your not-so-rapture-ready pomeranian, for instance.

But for a large percentage of the American population, the Rapture’s no laughing matter. According to the Pew Research Center for People and the Press, 41 percent of American believe Jesus will return by 2050. The belief that the Rapture is not only coming, but coming soon has a very real, if subtle impact on the American political scene—through foreign policy, economics, and social issues like gay marriage. Is your favorite politician bracing for Armageddon? Here’s a very incomplete guide:

Sarah Palin: The former Alaska governor has been bullish in her support for Israel—she kept an Israeli flag in her Juneau office, and as a vice presidential candidate said that Americans should never-second guess that nation’s policies. In 2009, she told Barbara Walters that “more and more Jewish people will be flocking to Israel in the days and weeks and months ahead.” Those ideas didn’t come from an international relations textbook; as a Liberty University researcher told the Atlantic‘s Jeffery Goldberg, it seemed to mirror her own eschatological views:

“I’ve read that Palin has been part of an apparently unique movement I’ve heard of — that her pastor, when she was in the Assembly of God, believed based on some personal revelation he claims to have gotten from God, that the Jews would move to Alaska during the Tribulation. But nevertheless, my understanding from what I’ve seen is that she holds fairly typical Protestant Zionist beliefs, and one of those beliefs is the regathering of the Jews in Israel.”

Rep. Roscoe Bartlett (R-Md.): If Bartlett is left behind, he’ll at least be well prepared. Earlier this year, the Maryland congressman and Seventh Day Adventist starred in the survivalist documentary, Urban Danger, in which he teaches viewers how to build a root cellar and can vegetables. Although the documentary never explicitly suggests what kind of catastrophe might require an underground shelter and stockpiles of food, interviewees suggest that it could be Biblical in nature. As the narrator puts it, “A storm is coming, relentless in its fury.” Writing for the Seventh-Day Adventist magazine Spectrum, Alexander Carpenter called Bartlett’s views, “faith-based apocalypticism” that are common among “fringe movements in the denomination.”

Dick Armey: In 2006, the former Republican House Majority Leader, and founder of the powerful astroturf group FreedomWorks (which stirred up outrage over health care reform), told the BBC the Rapture was imminent: “We talk about the End Times, the day of Tribulation. Yes there seems to be, if you believe in Bible prophecy, there seems to be a great deal of the circumstances that was prophesised present at this time, and a lot of people believe that this is the time for that prophecy. They also believe that a free and a, what shall I say, well, Israel will be a consequence after those days of Tribulation, but that the whole world goes through a difficult time during those days of Tribulation.”

Rep. Michele Bachmann (R-Minn.): She’s warned against the implementation of “One World” currency, advocated for a more pious military, and spread fears about the true motives of the smooth-talking leader who considers himself a citizen of the world—all of which feature prominently in Tim LaHaye’s Left Behind series (although LaHaye has said that Obama is not the Anti-christ). So perhaps it’s no surprise that Bachmann credits her start in conservative politics with a meeting with LaHaye’s wife, Beverly. Bachmann has championed apocalyptic causes in the most literal sense, warning that if the United States fails to properly support Israel, a “curse” will be placed on the land. She has also been a regular guest on Jan Markell’s “pro-Israel, prophecy-oriented” Olive Tree Ministries radio program.

Mike Huckabee: The former Arkansas governor and Southern Baptist preacher hasn’t talked much about the Rapture specifically; that’s what supporters are for. LaHaye was an advisor to his 2008 campaign. Also an advisor? Janet Porter, an Evangelical activist who has argued that former Wisconsin Gov. Tommy Thompson might be the Anti-christ, and calls for Christians to take over the government and media to prepare the Earth for the second-coming. Huckabee has also praised the Rev. John Hagee, the influential San Antonio mega-church pastor who mixes End Times eschatology with foreign policy through his organization, Christians United for Israel. (Hagee has called for the United States to “consider” military strikes against Iran).

Del. Mark L. Cole (R-Va.): Inspired by the Book of Revelations, Cole led the fight in the Virginia House of Delegates last February to ban employers or insurance companies from implanting micro-chips in people against their will. As Cole told the Washington Post: “My understanding—I’m not a theologian—but there’s a prophecy in the Bible that says you’ll have to receive a mark, or you can neither buy nor sell things in end times. Some people think these computer chips might be that mark.” We’re not theologians either, but this is what’s known in the industry as Too Good to Fact-Check (TGTFC). And for the record: planting micro-chips in people’s bodies against their will is definitely poor form, if not actually the work of the Devil.