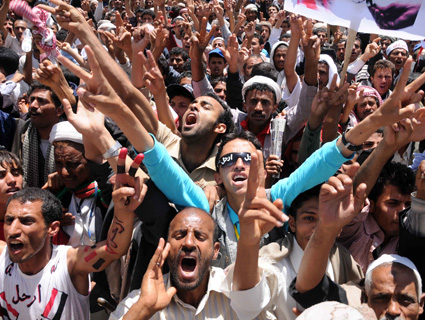 The following is a basic primer on what’s happening in Yemen. If you’re already caught up on that, you can also skip straight to advice on how to follow the latest developments in real time. Click here for the latest update.

The basics: Yemen is a mostly Arab, mostly Muslim country on the Arabian peninsula. Its capital, Sana’a, is one of the oldest continuously occupied cities in the world, and legend has it that it was founded by Shem, a son of Noah (you know, the one with the ark). Yemen’s population is around 25 million, but those people are spread out over a land area that is over 30 percent larger than California. Yemen is bordered by Saudi Arabia to the north and Oman to the east. Water forms Yemen’s western and southern borders: the African nations of Eritrea and Djibouti are across the Red Sea to the west and southwest, respectively, and Somalia is across the Gulf of Aden to the south.

During the Cold War, Yemen was split into two countries; Ali Abdullah Saleh became the ruler of the North Yemen in the late 1970s and has ruled the whole country since unification in 1990. Yemen is the poorest country in the entire Arab world.

What’s happening? The unrest sweeping across the Arab world hit Yemen early. Protests have been held in Yemeni cities since the earliest days of the Egyptian revolution back in January. But as protest movements in Egypt, Tunisia, and Libya forced some degree of political change in those countries, the Yemen protests grew, and the crackdowns by the country’s dictator, Saleh, grew increasingly violent. On Friday, March 18, (allegedly government) snipers killed at least 52 protesters with live ammunition. The European Union and United Nations Secretary General Ban Ki-Moon condemned the attack, Saleh became even more unpopular at home, and the dictator’s 30-plus-year rule started to unravel.

How does this affect the US? Everyone knows about America’s wars in Iraq, Afghanistan, and now Libya. Lots of folks also know that our drones strike at targets in Pakistan, too. But few Americans are aware of the full extent of the US role in Yemen. Saleh has been a key US ally in the fight against Al Qaeda, but he doesn’t have much power outside of the country’s major cities. Anwar Al-Awlaki, a New Mexico-born Al Qaeda propagandist and top target of the Obama administration, is thought to be hiding somewhere in Yemen’s vast hinterland. (US authorities believe Al-Awlaki encouraged both the Fort Hood shooter and the Christmas Day “Underwear Bomber.”)

Secret State Department cables released by Wikileaks show that Saleh worked extensively not only to help the US strike against its enemies in Yemen, but also to cover up America’s role in his country. In a September 2009 meeting with John Brennan, the Obama administration’s top counterterrorism adviser, Saleh reportedly offered the US “an open door on terrorism.” In practice, as the Guardian explains, “Yemen has restricted access for US forces in order to avoid playing into the hands of Saleh’s domestic critics.” Last January, Saleh met with General David Petraeus, then the head of US Central Command. According to a cable describing the meeting, Saleh “agreed to a have U.S. fixed-wing bombers circle outside Yemeni territory ready to engage [Al Qaeda in the Arabian Peninsula] targets should actionable intelligence become available.” The cable continues:

Saleh lamented the use of cruise missiles that are “not very accurate” and welcomed the use of aircraft-deployed precision-guided bombs instead. “We’ll continue saying the bombs are ours, not yours,” Saleh said, prompting Deputy Prime Minister Alimi to joke that he had just “lied” by telling Parliament that the bombs in Arhab, Abyan, and Shebwa were American-made but deployed by the [Republic of Yemen Government].

In other words, Saleh agreed to let Americans continue bombing his country, and agreed to continue lying about it.

The Yemeni government has also worked extensively with the US to reduce the number of foreign-born Muslims visiting Sana’a to learn Arabic. The US has long believed that “learning Arabic in Sana’a” was generally a front for terrorist training and radicalization. All the while, US “security assistance” to Yemen has shot up, from an already-impressive $67 million in 2009 to requests for first $150 million and then over a billion dollars in 2010. (NOTE: The $1 billion was just a request, a number under discussion according to the cables.)

Bottom line: if Saleh goes, US cooperation with Yemen on counterterrorism will be totally up in the air.

Why are Yemenis protesting? Yemen’s citizens are the poorest in the Arab world, and Yemen, for all its talk about being a republic, is a particularly nasty dictatorship, complete with the usual secret police and torture and general repression. The US role in Yemen is also extremely controversial and shouldn’t be underestimated as a contributing factor in the uprising against Saleh. Would you support a ruler who agreed to let another country bomb your country and then lied about it?

How do I follow what’s happening in real time?

UPDATE 1: Wednesday, June 1, 11:30 p.m. EDT: Tensions reached a breaking point Wednesday, as President Saleh unleashed state security forces on tribal protesters, killing as many as 41 and bringing the nation to the brink of a full-on civil war. Just days ago, the State Department ordered the departure of all nonemergency embassy workers and urged other US citizens to leave the country; the Britons are now following suit. According to the Wall Street Journal, Saleh’s onetime henchman, Brigadier Gen. Ali Mohsen al-Ahmar, has deployed 1,000 of his own troops to defend his tribesmen against Saleh. In response, the president has reportedly attacked them with US-trained counterterror forces. “It is believed to be the first time the troops—part of a US bid to gain Mr. Saleh’s cooperation in fighting Yemen-based Al Qaeda in the Arabian Peninsula—have been deployed against political opponents,” the Journal reported.

UPDATE 2: Saturday, June 4, 2:45 p.m. EDT: Saleh has left Yemen to seek medical treatment in Saudi Arabia following an attack on his compound, the New York Times confirms. It’s totally unclear what happens next, but this is obviously a huge development. There’s more from the folks on my Yemen Twitter list. UPDATE TO THE UPDATE: Early reports appear to be inaccurate (as they often are). Al Jazeera now says that the Saudi plane that was supposed to take Saleh to Saudi Arabia is still on standby at the airport in Sana’a.