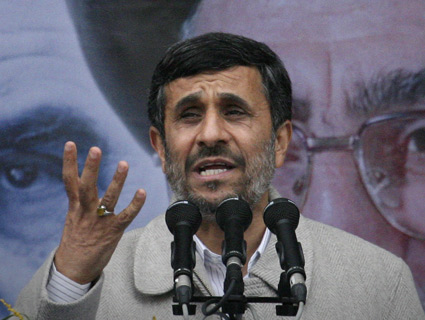 The uprisings in Tunisia, Egypt, Bahrain, Yemen, and Libya set off a maelstrom of political unrest throughout the greater Middle East that continues to set the Muslim-majority world ablaze. But two years earlier, it was Iran that was teetering on the brink of a revolution, with reformers seeking to bring down the hardline, conservative government of President Mahmoud Ahmadinejad.

After losing to Ahmadinejad in the presidential elections held in June 2009, former Prime Minister Mir Hussein Mousavi accused him of rigging the vote—a charge backed up by the overwhelming majority of international opinion—and called on the youth of Iran to take to the streets. Thus was born the the Green Revolution, as thousands of young, determined protestors filled the streets for days, harnessing the tools of social media to plan rallies that decried their government and its religious overlords. The country seemed to be teetering on the brink of a democratic revolution.

But the revolution never came. Thanks to the brutal repression of civilian militia forces and the Revolutionary Guard, Ahmadinejad reasserted his stranglehold on power. The International Campaign for Human Rights in Iran estimated that 500 Iranians are serving jail terms for political protests and 500 more are detained and waiting to be processed. And 120 have been executed since the beginning of 2011.

Then what happened? Invigorated by events in Middle East, pro-democracy protestors in Iran have taken to the streets again—this time, with a mission to oust Supreme Leader Ayatollah Ali Khamenei. Answering the call of oppostion leaders Mousavi and Mehdi Karroubi, they came out in full force on February 14 for what turned out to be the biggest pro-democracy protest in the country in over a year. The rally began peacefully. But as the demonstrators’ ranks grew, police ordered that shops be closed, and used tear gas and electric prods to enforce order. That same day, Mousavi and Karroubi were placed under house arrest.

But on February 24, both men and their wives were arrested, according to family members and activists. (Iranian authorities deny this.)

Who are Mousavi and Karroubi? Both served in the Islamic Republic: Mousavi as prime minister in the 80s and Karroubi as speaker of the parliament from 1989 to 1992 and 2000 to 2004. That might be why protestors remain skeptical, dissmissing them as reformers rather than revolutionaries—leaders intent on securing power through the existing channels rather than blowing apart those channels and starting fresh. Still, their words carry considerable weight for protestors.

Where are they now? Iran’s Prosecutor General Gholam Hossein Mohseni Ejei told the semi-official Iranian State television that they are still under house arrest. “Judicial action has been taken [against Mousavi and Karroubi], ultimatums have been issued… In the first step, their communications, including their comings and goings, and their telephone conversations have been restricted, and if need be, other steps will be taken,” he said.

But the International Campaign for Human Rights in Iran says that several sources are reporting that they may have been transferred to Tehran’s Heshmatiyeh Prison—a military prison that answers only to the Supreme Leader—which has been investigated previously, and partially closed because of its poor conditions. Mousavi and Karroubi’s children have had no access to their parents. “Time and again opposition figures in Iran are detained without contact with their families or lawyers, only to undergo abuse and appear on TV weeks later confessing to baseless charges,” said International Campaign for Human Rights spokesman Hadi Ghaemi. Meanwhile, on state televsion last week, Iranian intelligence chief Heydar Moslehi denounced Mousavi and Karroubi as “counterrevolutionaries“—a label punishable by imprisonment or execution.

Why arrest them now? Probably to stave off the renewed zeal for change, spurred by events in the Middle East. Taking them out of commission ensures that the opposition will have a tough time consolidating its energy and efforts behind a unified voice. Another theory: Ahmadinejad thinks his people are pretty dumb. Some observers say that he chose to detain them now in hopes of convincing Iranians that the large crowds on the streets are just holiday shoppers “going to buy supplies for the [Iranian] New Year,” which is celebrated in late March.

Also, in Ahmadinejadistan In a blindingly transparent act of hypocrisy the president convened the first ever “national human rights conference” in Iran on Monday. “In a world full of deception—where terrorism, internal disputes, war, bloodshed and military occupation are being supported in the name of freedom…it is the obligation of an Islamic government to provide the world with an excellent example and model for the achievement of religious democracy,” he said. “Today, in different parts of the world, signs of the weakness and desperation of the tyrannical powers are starting to surface and the collapse of the ideology and logic of domineering powers is evident. Nations now need a new path, a solid logic and divine and humanistic ideas.” And on Thursday, Khamenei said that the unrest rippling through the Middle East was inspired by Iran’s Islamic Revolution. “The arrogant front, led by the United States, is well aware that Iran’s Islamic Revolution is the role model for these popular movements,” he said during a visit to the country’s Ministry of Intelligence.

And In Foreign Lands Following the examples set by the United States and European Union, the Israeli government said on Thursday that it will join international sanctions against Iran. Which is weird, since Israeli security protocol doesn’t allow commerce between the countries anyway. Also: Israel. Iran. Come on.

This week On Tuesday, police in Tehran used tear gas, batons, pellet guns, and paintball guns (to identify people for arrest) on protestors demanding their release. And on Wednesday (Mousavi’s birthday), tens of thousands of Iranians again came out in full force, led by a group of dissidents known as the Coordination Council of the Green Path of Hope, reports InsideIran.org. Here’s what Ali-Akbar Moussavi-Khoeini, a former member of the Iranian parliament and a senior figure in the opposition, had to say:

There was a very good turnout. Many more people demonstrated on March 1 than on Feb. 20. What was more important this time was that the protests spread to other cities, such as Ahvaz. There were large demonstrations in Tehran, Karaj, Mashhad, Tabriz, and Esfahan as well. From videos sent to us and those posted online, we witnessed that people showed much more restraint yesterday. According to reports, no one was killed yesterday and that is great news. The government has a strategy to plant its agents in the crowds to instigate violence, which would then justify the government’s brutal response against the demonstrators. These infiltrators start violence—they did this during the student uprising in 1999.

The government has done its best to destroy the movement. But unlike other regimes in the region, this government carefully analyzes and learns from the mistake of other regimes, such as Mubarak’s Egypt. On Feb. 20, security forces deliberately pushed people to side streets and spilt them into small pockets. During that time period, Abdullah Gul, the president of Turkey, was in Tehran and Iranian authorities could not ban journalists from leaving their offices and covering stories. So, the government decided to deny protesters any ground to demonstrate, such as in big squares.

What’s next? The opposition has called for demonstrations every Tuesday until Mousavi and Karroubi are released.