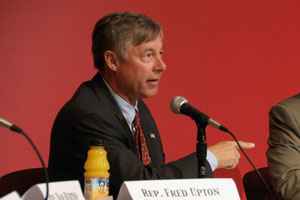 Does Rep. Fred Upton (R-Mich.) have something to hide when it comes to his position on climate change?

In the past, Upton—the incoming chair of the House energy and commerce committee—has advocated taking action on global warming. “I strongly believe that everything must be on the table as we seek to reduce carbon emissions,” he once stated on his website. But that statement recently vanished from his site—along with, it seems, his concern about global warming. Following a tea party-aided Republican takeover of the House and a heated fight for the chairmanship of the powerful committee, Upton’s position on climate change has veered closer to those of his global-warming-denying caucus-mates. And he’s now vowing to use his new role to thwart efforts to cut emissions.

Late last week, Upton coauthored a Wall Street Journal op-ed with Tim Phillips, the president of Americans for Prosperity, a conservative group that has opposed action on climate change. In it, the pair wrote that a new EPA regulation to curb greenhouse gas emissions, which took effect on Sunday, “presumes that carbon is a problem in need of regulation. We are not convinced.” They also decried the carbon rules as “an unconstitutional power grab that will kill millions of jobs.”

Phillips’ position is not suprising. Denying climate change is an institutional priority for AFP, which has received millions from fossil fuel interests, including $5 million from the philanthropic arm of the oil and gas giant Koch Industries. AFP has even coordinated a climate change-denying “Hot Air Tour,” which made a stop in Cancun last month during the UN climate summit there.

AFP’s interest in thwarting EPA regulations is clear. But Upton is another story. Less than two years ago he declared, “Climate change is a serious problem that necessitates serious solutions,” and he praised a wind energy program back home in Michigan. While Upton has staunchly opposed cap-and-trade legislation, over the years he’s partnered with Democrats on a number of bills that would help cut emissions—including one to spur the development of carbon-capture and storage technology for coal-fired power plants, another to improve lighting efficiency, and yet another to increase funding for a Department of Energy loan program to help automakers retool factories to create more efficient vehicles. While other members of his caucus pledged to wage war on compact fluorescent lightbulbs, Upton stood out as a voice of reason.

Just the same, Upton has gradually retreated from his moderate stance on climate change and carbon emissions. (See Brad Johnson’s compendium of quotes documenting Upton’s shift.) Particularly telling was an Upton exchange with reporters at the UN’s climate conference in Copenhagen in December 2009. There, he was asked several times in a press conference whether he believed that global warming was a problem, and twice declined to answer directly. “I think we can lower our emissions,” Upton said finally. “I think the world will be better off if we did that, and we can do it without cap and trade.” But just a few weeks later, Upton claimed there is “no real science to verify” that cutting emissions would stave off climate change.

In the months since Republicans claimed the House, Upton’s taken a much harsher stance against regulating emissions. He faced stiff competition from more conservative members for the energy and commerce committee for the chairmanship, and he had to overcome complaints that he was “too moderate” for the post. (Then there’s the money factor: Koch was among Upton’s top contributors this election cycle, along with several other energy companies.)

Now Upton is floating the idea of using the Congressional Review Act to block the EPA’s new regulations on greenhouse gas emissions. Under the obscure law, which is rarely invoked and even more rarely successful, Congress can overturn regulations from the executive branch within 60 days of their publication in the Federal Register. It’s a pretty drastic move, especially to block regulations from the EPA that were based on a directive from the Supreme Court—and on overwhelming science, which Upton once recognized, indicating that the greenhouse gases do indeed pose a threat to humans.

During an interview with Chris Wallace this weekend, the Fox host called Upton out on his climate change waffling. Upton largely dodged the question of how much of a problem he really thinks global warming really poses. Here’s the exchange:

WALLACE: I want to follow up quickly on this with you and then I want to bring in Congressman Issa, on this question of EPA regulation. In the article that you co-wrote with the head of Americans for Prosperity, which is a group that is financed in part by oil companies, you say this — “This presumes that carbon is a problem in need of regulation. We are not convinced.”

But we checked, Congressman, on your congressional web site, and you say on the web site, “I strongly believe that everything must be on the table as we seek to reduce carbon emissions. Climate change is a serious problem that necessitates serious solutions.”

So question, is carbon a problem or isn’t it? And if it is, if you’re going to kill the EPA regulation, what is your solution?

UPTON: We want to do this in a reasonable way. Before the end of the next decade, our country is going to need 30 to 40 more percent more electricity that we use today. So we need an all-of-the-above strategy. We need clean coal. We need natural gas. We need nuclear — something that has not happened. We need a whole host of things.

WALLACE: Do we need to regulate carbon?

UPTON: I don’t think that we have to regulate carbon to the degree we have a carbon tax or you have a cap-and-trade system. And the House spoke pretty loudly — you know, you take that same cap-and- trade bill that passed the House last year. Today it would lose by 50 votes and it could never come up in the Senate. This is not — this regulation process is not the way to proceed.

The quote Wallace highlighted is no longer on Upton’s website, though ThinkProgress has captured both an old version and the new one. Given the atmosphere in Congress, it’s likely Upton will follow through on his pledge to use his chairmanship to thwart environmental regulation. But it’s worth remembering that Upton was once considered among the most moderate members of the GOP on the issue. No longer.