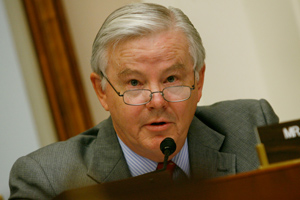 After Rep. Joe Barton (R-Texas) apologized to BP in June for what he described as an Obama administration “shakedown,” Democrats saw an opportunity. Within a week, Barton, the ranking minority member of the Energy and Commerce Committee, was starring in Democratic National Committee ads titled “How Republicans Would Govern.” The White House even got in on the action. “Who would the GOP put in charge of overseeing the energy industry & Big Oil if they won control of Congress?” tweeted White House press secretary Robert Gibbs. “Yup, u guessed it – JOE BARTON.”

Barton certainly has an odious record when it comes to the environment. He’s received more campaign donations from fossil-fuel interests than any other currently serving member of the House. A House veteran for 25 years, Barton believes that global warming, if such a thing even exists, is really no biggie. But while he may provide Democrats with a convenient narrative on the hazards of a Republican takeover, he’s probably not the member enviros will have to worry about. Congressional Republicans set limits on how long a legislator can serve as the senior member or chairman of a committee, and Barton’s term is up this year. He could request a waiver to continue on, but his office isn’t saying whether he will.

“The Republican Conference, of course, makes the rules and the decisions, and both the conference and the congressman will cross that bridge when they come to it,” says Barton spokesman Sean Brown. “Right now, he’s just working hard to make sure that Democrats have a chance to fill the ranking members’ seats next year with their very best survivors.”

The fate of the Democratic majority in the House looks grim. Republicans need to pick up 39 seats to gain control; pollster Nate Silver gives the Republicans a two-in-three chance of claiming the majority, with an anticipated gain of 45 to 50 seats.

So, if not Barton, who else is in line for the top spot on Energy and Commerce, should Silver’s prediction bear out? A top contender is Fred Upton (R-Mich.). He’s among the most senior members of the committee, and he is currently the ranking member of the panel’s Energy and Environment Subcommittee. He’s widely considered one of the committee’s more moderate members, and has worked with Democrats on several pieces of energy legislation—a bill to spur the development of carbon-capture and storage technology for coal, legislation to improve lighting efficiency, and a measure to increase the funding for a Department of Energy loan program to assist carmakers in retooling factories to create more efficient vehicles.

Upton was critical of the cap-and-trade bill Democrats advanced in the House last year, arguing that it would burden businesses and consumers. But Democratic congressional staffers regard Upton as someone they can work with on energy and climate issues even if he didn’t support their bill last year. He has at least acknowledged that cutting emissions is a worthy goal (though he generally avoids stating his point of view about whether said emissions are warming the planet). “I think we can lower our emissions,” Upton said last December. “I think the world will be better off if we did that, and we can do it without cap and trade.”

Bashing cap and trade has become obligatory in the Republican Party, but many observers think Upton is actually supportive of action on the issue in the long run. “He knew if he stepped out of line, leadership would kill him,” said one House aide. “So he towed the line.” His office did not respond to a request for comment on whether he would pursue the chairmanship.

Another name that’s been floated as a possible contender for the chairmanship is Rep. Cliff Stearns (R-Fla.), ranking member of the communications subcommittee. Upton has seniority, but Stearns has also expressed interest. “The Energy and Commerce Committee has jurisdiction over so many pressing issues affecting the future of our nation,” Stearns told Mother Jones. “I think that my leadership could help advance those issues and I would be interested if the chairmanship opens up.”

Stearns has voted against almost every piece of environmental legislation in the past decade, but he hasn’t been as stridently anti-climate science as many members of his party. (That excludes passive re-Tweeting of other members on the subject.) He’s also a member of the Renewable Energy and Energy Efficiency Caucus and has touted the virtues of both.

But if Republicans retake the majority with a wave of right-wing candidates and John Boehner (R-Ohio) assumes the role of speaker, the chance that moderates like Upton or Stearns will take the top seats on committees may be slim. Boehner, after all, still thinks the chief cause of global warming is cow farts. The Boehner reign presents a much more frightening prospect for environmentalists than even a Barton chairmanship and promises a Congress that will walk in “lockstep with Big Oil and Dirty Coal,” says Sarah Chieffo, deputy legislative director at the League of Conservation Votes. Boehner’s leadership also makes it more likely that someone like John Shimkus of Illinois, among the most anti-science members of the House, could be tapped to fill the top slot on Energy and Commerce.

Shimkus earned plenty of attention for his antics during the markup and debate of the climate and energy bill in March 2009, trotting out photos of jobless coal miners, hard-hats, and other props at every opportunity and bellowing about the “carbon-starved” planet. Regulation of emissions, he said, would mean “taking away plant food from the atmosphere.”

His office would not comment on whether he’s interested in the chairmanship. “The congressman is focused on John Boehner becoming speaker,” says his spokesman, Steve Tomaszewski. “Any other issues come afterwards.”

Whoever heads the committee in a GOP-controlled House, there will be a stark turnaround from the way things were under the Dems. If some conservatives get their way, the GOP’s top priority could be ensuring your right to inefficient lightbulbs. Given the other environmentally unfriendly efforts GOPers can undertake (stripping the EPA of its ability to regulate emissions, opening new areas of the country to oil and gas drilling, and lavishing more incentives and subsidies on friends in the fossil fuels industries), ample time wasted on wasteful lightbulbs may be the best Democrats can hope for.