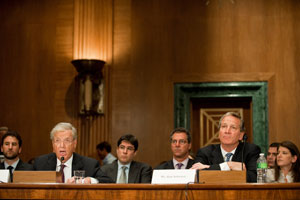 The Financial Crisis Inquiry Commission (FCIC), charged by Congress with investigating the causes of the economic collapse, released its final report (PDF) on Thursday. It also made many of its source documents available, and promised to release others shortly. But on the second page of the preface (PDF), the commissioners warned that “more materials that cannot be released yet for various reasons will eventually be made public through the National Archives and Records Administration.” For some of the commission’s detractors, that’s another sign of trouble from an already troubled body.

[Read Marilyn Snell on the FCIC’s failure to interview actual victims of the mortgage crisis.]

Let me explain. Michael Perino, a law professor at St. John’s University in New York, has been a fierce critic of the commission. In October, Perino published Hellhound of Wall Street: How Ferdinand Pecora’s Investigation of the Great Crash Forever Changed American Finance. The book is a history of Senate staffer Ferdinand Pecora’s pathbreaking work investigating the causes of the Great Depression during the early years of Franklin Delano Roosevelt’s administration. Pecora’s exposure of Wall Street wrongdoing gave fuel to Roosevelt’s push for financial reform.

Perino says that the FCIC—an independent, non-congressional commission hamstrung by partisan division and restrictive ground rules—simply couldn’t provide the same sort of reforming push that Pecora’s investigation did, because it didn’t have the power, the heft, or the perfect timing that Pecora did.

But the commissioners can still make a difference. “The most important thing the FCIC can do right now is release all of the documents and all the transcripts of interviews they’ve collected over the course of their investigation,” Perino tells Mother Jones. “Opening up all those materials would allow independent investigators to pore through them and reach their own conclusions.” (Perino wrote a piece for Fortune making a similar argument late last year.)

The FCIC’s commissioners, for their part, believe that they’ve done their best to be transparent. But Phil Angelides, the FCIC’s chairman, told Mother Jones in a Thursday conference call that the commission simply couldn’t release everything. “In the course of doing this kind of inquiry, you look at many documents that are completely irrelevant,” Angelides says. In addition, he says, “there are trade secret laws, other laws, federal law that controls the ability of the commission to release documents… It wouldn’t be responsible to do a document dump of documents that weren’t relevant to the crisis.”

Perino, however, has pointed out that today, years after the closure of the 9/11 commission, two-thirds of that body’s documents still remain under seal—and there are national security concerns at stake there that do not apply to the FCIC’s work.

Dean Baker, the co-director of the left-leaning Center for Economic and Policy Research, agrees with Perino’s call for maximum transparency from the FCIC. “It certainly would be great to release it,” Baker says. “In principle there’s definitely a lot of stuff there that would require a lot of sifting through to make sense of.” Baker’s especially curious to see what people at the highest levels of mortgage lenders, securitizers, and bond ratings agencies knew about what they were selling, packaging, and rating. Angelides has promised that interviews with some top executives will be made available to the public. But it’s unclear what will and will not be released.

Jay Rosen, a journalism professor at New York University, also endorsed Perino’s call for transparency. Here’s what he told me in a phone interview:

In this case, the commission came to a very frustrating impasse. The report, as I understand it, says [the financial crisis] was a preventable thing and preventable by lots of different measures. The Republican dissent is that this was caused by Fannie Mae and Freddie Mac. That’s one of those disputes where it’s not just two interpretations of common facts diverging from one another. Those are two different narratives coming out of the same commission, which lead in two different policy directions and really tell two different stories.

There are powerful incentives in certain institutions to just leave it at that. The most obvious one is the “he said/she said” journalism, where you say, “This is what the commission Republicans said, this is what the Democrats said, and really—who can tell.” The release of documents provides a way for people to provide a check on that tendency.

Like Rosen, Angelides worries “there’s going to be a very conscious, deliberate effort to rewrite history, to wave this away like it was a bump in the road.” He can try to fight that tendency by immediately releasing all the documents the commission is not legally required to keep secret. Determining which documents are “relevant” is a task best left to the public, not FCIC staff members and commissioners deliberating behind closed doors.