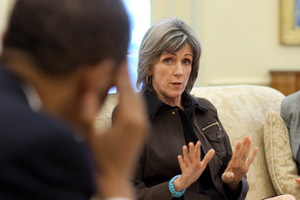 UPDATE 2:28 PM: White House press secretary Robert Gibbs responded to a question on the future of Browner’s office aboard Air Force One on Wednesday. “I don’t know exactly what the structure of her office is going to look like,” said Gibbs, “but I can assure you that regardless of the staffing inside the White House, first and foremost the President is committed to continuing our important investments in the innovation around clean energy manufacturing and in addressing the long-term problems and our continual increase in our dependence on energy sources in other places in the world.”

ORIGINAL STORY: On climate and energy matters, no one had the president’s ear more than Carol Browner, for whom a special White House office was formed to lead the push for a wholesale overhaul of energy policy. Denigrated by the right and celebrated by the left, Obama’s climate czar—who announced her resignation late Monday—ultimately failed in her central mission: shepherding legislation that addressed the threat of global warming. Political observers and environmental advocates view her departure as a sign that climate may have been banished to the back of Obama’s domestic agenda once and for all. Some worry that Browner’s resignation could also spell the end for the White House Office of Energy and Climate Change Policy; and they are reading into the timing of the move, just a day before Obama’s State of the Union and at a time when the administration has veered noticeably to the center.

“In politics there are no coincidences, especially during the State of the Union news cycle,” remarks a House Democratic aide who works closely on energy issues. “It’s hard to ignore this as anything other than a message of some kind.”

In announcing her appointment in December 2008, Obama touted Browner as “indispensable in implementing an ambitious and complex energy policy.” The administrator of the Environmental Protection Agency during the Clinton administration, she was widely regarded as a deft, experienced bureaucrat with solid environmental credentials. While she has been credited for orchestrating a deal on fuel economy standards for automobiles and a major investment in energy in the stimulus bill, she was unable to accomplish the administration’s top-line goal, a comprehensive climate and energy bill. The House passed its bill in June 2009, but the issue never gained momentum in the Senate.

“Unfortunately for Browner she was never given the firepower she needed to really push this bill through Congress,” says the aide. Instead, White House personnel, time, and energy were consumed by the health care and financial reform packages. Browner’s small staff, meanwhile, was often shunted aside by strategists and political operatives who never saw climate and energy as winning issues, as accounts from White House insiders have indicated. “The deck was stacked against her to start,” says the aide.

Not all environmentalists took Browner’s departure as evidence of a major shift in the White House. “I’m not worried at all that this signals some sort of lessening of the commitment to the environment,” said Anna Aurilio, director of the DC office of Environment America.

Yet her departure comes as many have given up any hope of passing comprehensive climate legislation during the remainder of Obama’s term. With the House under Republican control, a stalemate on the issue is virtually guaranteed. And Browner, like other veterans of the Clinton administration, knows what it’s like to deal with a divided Congress. After the Republican takeover of the House in 1995, Browner and the EPA were top targets for investigation and allegations of wrongdoing. Recently, at least one Republican House committee chairman listed grilling Browner as a top priority. Some Democratic insiders speculate that Browner may have departed in the interest of avoiding a repeat of the Clinton-era inquisitions at a time when her efforts aren’t likely to pay off in any major way.

Others point out that the staff change comes amid personnel reshuffling at the White House, including most recently the appointment of former JPMorgan executive Bill Daley as Obama’s new chief of staff, a move that riled progressives but pleased many business interests. That, along with the administration’s more business-friendly tone following the midterms, has caused concern among some environmentalists that Browner was sacrificed in effort to bolster that centrist appearance.

As Browner’s tenure comes to an end, it’s an open question what will become of her office. Browner “will stay on as long as necessary to ensure an orderly transition,” says a White House official via email. “Carol is confident that the mission of her office will remain critical to the President. The President’s commitment to these issues will of course continue.” So far however, the White House has declined to comment on whether the office will remain once Browner officially departs.

For now, Browner’s deputy, Heather Zichal, is staying on. Zichal was Obama’s top campaign adviser on climate and energy and has a history of working with key congressional leaders on this issue, including Sen. John Kerry (D-Mass.). Zichal is well regarded, but some observers say the office would need someone at least as high-profile as Browner if the position is to remain relevant. Among those floated as potential successors was former California governor and Republican environmental champion Arnold Schwarzenegger. Other names mentioned include two former Democratic governors, Bill Ritter of Colorado and Jennifer Granholm of Michigan.

“Carol Browner was an essential leader in this administration,” says Dan Weiss, director of climate strategy at the Center for American Progress Action Fund. “She will be difficult to replace.”

Others enviros, though, wonder whether Browner’s departure could serve as an opportunity, suggesting her role as a political lightning rod had become a distraction. In her stead, Obama could appoint “someone with a little less of a green scarlet letter,” says one environmentalist.

But that’s assuming that Obama appoints someone at all. Her position could disappear entirely, or be reduced to the point irrelevance—and neither development would please Obama’s environmental contingent. Browner “was a very, very valuable friend in the White House for the EPA, which always needs a friend in the White House if it’s going to function effectively,” says Frank O’Donnell, president of Clean Air Watch. He adds, “If the office goes away, it’s going to make the president’s chatter about clean energy seem pretty hollow.”