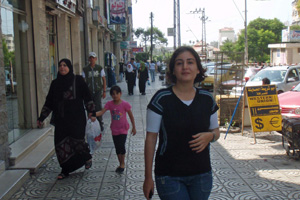 Palestinian feminist Asma Al-Ghoul arrived to our meeting at a Gaza coffee shop sporting blue jeans and a T-shirt—in stark contrast to the Islamic headscarves and tent-like dresses worn by the vast majority of Gazan women.

It’s not just clothing that sets this 28-year-old secularist apart. She once publicly chastised a senior Hamas military leader—her uncle—who threatened to kill her, and she continues to publish gutsy articles, read banned books, and defy discriminatory policies. “Gaza needs all the liberal, secular people to stay here,” she insisted, when I asked why she had declined opportunities to live abroad.

For three years, Israel has enforced a devastating blockade of the Gaza Strip aimed at isolating Hamas, the Islamic militant group that won Palestinian parliamentary elections in 2006 and seized control of this Palestinian territory in a 2007 civil war. (Fatah, a more moderate Palestinian faction, retained control of the West Bank.) Since then, Hamas has introduced restrictive new laws, including prohibitions against women using male hairdressers or smoking hookah in public. Hamas police have shut down musical concerts and interrogated suspected couples. Principals at government schools have reportedly pressured even Christian girls to wear the Islamic headscarf. Through it all, Asma has remained devoted to secularism, and was recently awarded a prestigious Human Rights Watch grant for her “commitment to free expression and courage in the face of political persecution.” But will she be able to help build the inclusive civil society she seeks?

The oldest of nine children in a “secular but not bourgeois” family, one of Asma’s earliest memories is the sound of Israeli soldiers’ boots coming to raid her home in the middle of the night. Rafah, her home city near the Egyptian border, is one of the most conservative and deprived communities in Gaza, and a frequent target of Israeli bomb strikes and incursions.

To the dismay of her relatives, Asma stopped wearing a headscarf. “I didn’t want to be two characters—one secular, the other Islamic,” she says.

After attending university in Gaza, she took a reporting job at a local Arabic newspaper, Al-Ayaam. Her hard-hitting blog posts, tweets, and articles have chronicled what she calls “the corruption of Fatah and the terrorism of Hamas.”

In late 2003, Asma married an Egyptian poet—a “love marriage,” which challenged the arranged marriage tradition practiced by most Gazans. The couple moved to Abu Dhabi and had a son named Naser, but divorced after a year and a half. Asma and her son moved in with her family in Gaza City, where Asma continued working as a journalist.

To the dismay of some relatives and acquaintances,  in 2006 Asma decided to permanently remove her Islamic headscarf. “I didn’t want to be two characters—one secular, the other Islamic,” she says of the choice. To her relief, Asma’s immediate family—including her father, an engineering professor at Gaza’s Islamic University—supported her autonomy. “If your father or husband is secular,” Asma says, “only then can you be free.”

During the 2007 civil war, Asma attended a journalism course in South Korea, where she published a scathing Arabic article titled, “Dear Uncle, Is This the Homeland We Want?” The article recalled fond childhood memories of her father’s brother, a Hamas military leader—then assailed him for turning against his own people and using the family home to interrogate and beat Fatah activists. In response, Asma’s uncle threatened to kill her. A year later, Asma wrote her way through the trauma of the 2008-2009 war between Israel and Hamas militants, which claimed the lives of 13 Israelis and about 1400 Gazans. Often, she slept at her office for fear of getting killed on the way to her home, a mere five-minute walk away.

“I felt as if Israeli military planes were blind,” Asma recalled. “They attacked everything and everybody. I saw dead children…As a woman and as a human being, I don’t believe in revenge, because it just brings more blood. But people said to me during the war, ‘You see? This is your peace.'”

While Asma has befriended liberal Jewish activists in Gaza, she has never entered Israel. In 2003 and again in 2006, the Israeli government denied her permission to travel through Israel to the West Bank, which is territorially separate from Gaza, to receive awards for her writing.

Recently Asma garnered media attention for two incidents with the Hamas police. In the summer of 2009, she walked on a public Gaza beach with a mixed gender group, and visited a former male colleague and his family at a beachside villa. Asma and her friends were interrogated by Hamas moral police, and the men were forced to sign papers promising not repeat their “inappropriate” interactions with women. Asma later received anonymous death threats and was followed and closely monitored by police.

But there are glints of hope for secularists in Gaza. This August, during the Islamic holy month of Ramadan, Asma and three foreign activist friends biked up the Gaza coastline in defiance of a Hamas ban on female bicycle-riding. To Asma’s delighted surprise, local Hamas police officers pursued two motorcyclists who had followed and harassed her. And she found that most civilians “were shocked in a funny way. They said, ‘Let’s go! Bravo!’ They asked, ‘Are you fasting [for Ramadan]?’ And I said, ‘Yes, I’m fasting!'”

Asma’s biking adventure led her to conclude that the discriminatory laws against women are “flexible.” She now believes that Hamas is “between two fires—how to keep civil society satisfied, and how to satisfy extreme groups.”

But Asma has begun to question her own commitment to staying in Gaza.

Her brother Mustafa was arrested and jailed by Hamas police last week for participating in street protests against Hamas’s recent shutdown of Sharek Youth Forum. The nonprofit, which organized camps and afterschool programs for more than 60,000 Gazan children, is accused of storing pornography on its computers.

Asma never worked for Sharek, but she admired the organization’s work. Sharek was perhaps best known for organizing gender-segregated beachfront activities for the annual children’s summer games, sponsored by the United Nations Relief and Works Agency. This past summer, the tents erected for these games were repeatedly torched by masked gunmen who threatened to kill UNRWA staff members. Anonymous fliers spread prior to the torchings derided UNRWA and Sharek for “teaching schoolgirls fitness, dancing, and immorality.”

“I used to criticize Sharek for being too conservative because they didn’t allow music for office employees,” Asma told me with a sad, fatigued sigh during a phone interview last Friday. “Sharek is a small example of what Hamas wants to do with this society. Later there will be big examples.”

These days, when Asma is not overcome with worry about her imprisoned brother’s fate, she is reading, writing, and following the news, including coverage of the failing peace negotiations between Israel and Fatah. She regards these talks as a “sad fairytale where everyone knows the ending.” She’s acquired a smuggled Arabic copy of Midnight’s Children by Salman Rushdie and insists, “We should read it before we judge it.” She’s also finishing the manuscript to her novel, titled City of Love and Taboo, which explores the Islamization of Gaza. She’s hoping to publish it in both Arabic and English.

“Everything is taboo in Gaza now,” she says, explaining the book’s title. “Yet, at the same time, people still touch and feel and love.”