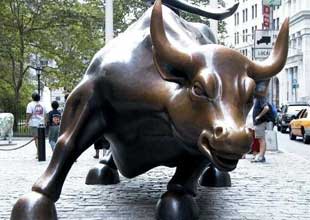 Photo used under a Creative Commons license from <a href="http://www.flickr.com/photos/trackrecord/54515014/" target="new">trackrecord</a>.

At 5:39 a.m. on Friday, after a 20-hour negotiating marathon, top House and Senate lawmakers put the final touches on Congress’ 2,000-plus-page bill responding to one of the worst financial meltdowns in US history. The bill, more than a year in the making, would create a new Consumer Financial Protection Bureau, seek to end taxpayer bailouts, and illuminate the opaque and risk-laden $600 trillion derivatives market. The legislation was the target of fierce lobbying by groups on all sides of the debate, and some clear winners and losers emerged as the House and Senate merged their bills into one. Here are some of the biggest in each category:

Too-Big-to-Fail Banks: They were at the heart of the financial crisis, and their fate was likewise at the center of the grueling financial reform debate. In the end, however, it looks like systemically risky banks and non-banking institutions will escape any major crackdowns. Sure, JPMorgan Chase, Goldman Sachs, Bank of America, and their ilk will see some dips in profitability due to new derivatives reforms and a ban on proprietary trading (when banks trade for their own profit). But as Simon Johnson, former chief economist of the International Monetary Fund, told Mother Jones in an email, “the legislation will not reign in [too-big-to-fail] banks and they will be at the heart of what happens next.”

One proposal that would’ve broken up the biggest banks and capped their leverage (the debt they amass to amplify their financial bets), the Brown-Kaufman Amendment, was opposed by the Obama administration and killed in the Senate. That amendment posed a major threat to banks not only by limiting their financial size and risk-taking abilities, but also by scaling back their political clout and outsized influence over regulators due to their economy-tumbling size. Now, all that’s left in the financial reform bill addressing too-big- and too-interconnected-to-fail banks is a council of regulators to keep an eye on big banks and a plan to recoup the cost of a bank’s unwinding after its collapse to ensure taxpayers aren’t on the hook for it. That’s little consolation to reformers like Sen. Russ Feingold (D-Wisc.), who fear mega-banks could cause the next financial meltdown.

Auto Dealers: After months of lobbying, auto dealers and their influence peddlers on Capitol Hill succeeded in winning an exemption from oversight under a new Consumer Financial Protection Bureau. Dealers, who make almost 80 percent of all auto loans, bilk consumers out of an estimated $20 billion annually through shady practices like inflating a car’s actual retail price by tacking on unnecessary products and services. Dealers had already prevailed in the House’s version of the bill, passed in December, but lost out on the Senate side, which voted to include them under the Bureau’s purview. During the conference process, dealers pushed hard and managed to win an exemption from Bureau oversight, a loophole sure to appear in the final bill.

Consumer Protection Advocates: On Wednesday, bailout watchdog Elizabeth Warren gave her imprimatur, albeit hesitantly, to the new Consumer Financial Protection Bureau agreed upon by the House and Senate. The idea was largely Warren’s brainchild, and the Harvard professor said she still supports the new independent Bureau, which would be housed in the Federal Reserve, funded by an independent budget, and led by a presidentially appointed candidate. Warren had previously pushed for a standalone Consumer Financial Protection Agency, resembling the EPA, but once that idea was deemed politically toxic due to Republican opposition, Warren threw her support behind a Fed-housed bureau so long as the Fed doesn’t meddle with its activities.

Warren has said she’s disappointed by the carve-outs in the Bureau’s oversight, including the exemption of car dealers under its mandate. But, as she told Huffington Post‘s Ryan Grim, “right now the bureau has the authority and the independence it needs to fix the broken credit market. I keep waiting for an incoming missile that means the banks have won their fight to destroy this consumer agency, but that hasn’t happened so far—and I don’t think it will.”

Sen. Scott Brown (R-Mass.): Despite joining Democrats to vote for the Senate’s reform bill in May, the junior senator’s vote is in play on the Senate’s final vote on the bill, which is expected next week. But before voting with Democrats again, Brown demanded changes to the bill’s “Volcker Rule” provision, which would limit banks’ investments in riskier entities like hedge funds and private equity funds. Brown pushed for a loophole in the Volcker language, allowing banks to invest a small percentage of their money in these funds—a change sought by major investment firms in Brown’s home state, like State Street, a Boston-based investment company.

In the end, Brown got his loophole, which was opposed by Democrats and former Fed chairman Paul Volcker himself. Now, we’ll see if Brown again votes in favor of financial reform. If he does, he will, in other words, have had his cake and eaten it, too: his big bank constituents will get their loophole, and Brown will get to look like a reformer.

Derivatives Industry: For months, Arkansas Sen. Blanche Lincoln stood firm in defending her tough derivatives provisions that would’ve forced banks to spin-off all of their swaps trading operations. Her reforms, better known as “Section 716,” were anathema to Wall Street and its lobbyists, opposed by the White House, but backed by a chorus of experts, like economists Joseph Stiglitz, Nouriel Roubini, and James K. Galbraith.

At the 11th hour, however, the derivatives industry won: to ensure the bill’s passage, Lincoln’s proposal was watered down so that banks need only spin off their riskiest swap trades in areas like agriculture, metals, and energy. Trades of interest-rate swaps, foreign exchange swaps, and gold and silver swaps will be allowed to stay in-house at the big banks.

Here’s why that’s a major win for the industry: In December 2009, the swaps trades exempted from the spin-off rule now in the bill accounted for almost $500 trillion in notional value, according to the Bank for International Settlements (pdf); for some context, the total over-the-counter market at time was valued at $614 trillion. Now, all those trades weren’t executed by American banks, but it shows how diluted Lincoln’s proposals became. With Congress allowing banks to make the kinds of swaps trades that account for more than 80 percent of the market, Wall Street and its lobbyists won a loophole that all but defeats the spin-off provision entirely.

The Credit Card Industry: The big credit card companies face billions in losses each year from a ban on interchange, or “swipe,” fees, pushed by Sen. Dick Durbin (D-Ill.), in the final bill. Swipe fees comprise around 1 to 3 percent of credit or debit card purchases. That amount, paid by store operators, flows into the coffers of companies like Visa and Mastercard as well as the banks (Chase and Bank of America, for instance) that issue cards to consumers. According to The Nilson Report, swipe fees totaled $62 billion in 2009 from almost $4 trillion in US purchases.

Despite intense lobbying from the credit card industry, top House lawmakers agreed on Tuesday to incorporate a major portion of Durbin’s swipe-fees ban into the merged financial reform text. Once the bill goes into effect, credit and debit card companies are set to lose a significant source of income.

Office of Thrift Supervision: The beleaguered financial regulator, which oversees federal banks as well as institutions like mortgage lenders, will be no more under the bill. Criticized by many as the weakest of all federal regulators, the OTS is set to be merged into the Office of the Comprotroller of the Currency and its duties would be split among existing bank regulators, the Federal Reserve, and the new Consumer Financial Protection Bureau.

Main Street Investors: For years, securities regulators have pushed to end a glaring conflict of interest among a particular breed of financial advisers called broker-dealers. Broker-dealers, such as Goldman Sachs and Morgan Stanley, both advise investors and sell them financial products, as well as trade for their own benefit. A particularly egregious (and potentially illegal) example is the transaction for which Goldman Sachs is currently under investigation by the SEC, which allegedly entailed peddling to its investors a product that was rigged to fail and which Goldman itself was betting against. Unlike investment advisers, who by law must put their clients’ interests first, broker-dealers don’t have a “fiduciary duty.” That’s right—they can screw over their clients if they want and don’t have to disclose conflicts of interest in financial deals.

The House’s bill featured a provision that would’ve immediately made broker-dealers adhere to a fiduciary duty. In the merging of the House and Senate bills, however, lawmakers agreed Thursday to require a six-month study by the Securities and Exchange Commission on the need for this measure—even though a 2008 RAND Corporation report, commissioned by the SEC, concluded that customers have trouble differentiating between broker-dealers and investment advisers, and that a fiduciary duty would beneficial. “We saw this as the strongest investor protection provision in the whole package,” says Bob Webster, communications director with North American Securities Administrators Association. Now, he adds, “we really have no idea what the fiduciary standard will look like.”