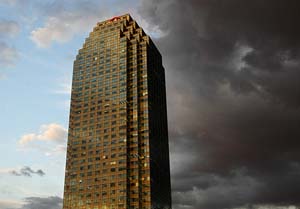 Late on Thursday night, an effort to rein in the mega-banks that brought the American economy to the brink of disaster died on the Senate floor.  Sens. Ted Kaufman (D-Del.) and Sherrod Brown (D-Ohio) had offered an amendment that would have broken up the biggest banks and forced them to scale back the amount of money they borrow to amplify their bets in the financial markets (a reform known as leverage limits). Experts said the Kaufman-Brown amendment, which failed by a vote of 60-33, would have helped safeguard the economy against another crisis. So why did the Obama administration, which has urged Congress to overhaul the financial system, distance itself from—and even oppose—this measure?

The Kaufman-Brown amendment would have barred any single bank-holding company from owning more than 10 percent of the nation’s total deposits. A bank couldn’t hold non-deposit risks—including complex financial products such as derivatives—exceeding 2 percent of the nation’s gross domestic product (currently about $14.6 trillion). And non-bank institutions, such as subprime lenders, couldn’t hold liabilities exceeding 3 percent of GDP. If the amendment passed, Kaufman said, Citigroup, whose balance sheet totals more than $1 trillion, would have been compelled to shrink to half its current size—or what it looked like circa 2002. Goldman Sachs, with a balance sheet of $850 billion, would have needed to reduce its liabilities to $450 billion.

You might think the Obama administration would have cheered this proposal. Treasury Secretary Timothy Geithner wrote in April that, “We must…push to make sure the government has real authority to help end the problem of ‘too big to fail.'” Yet the White House declined to throw its weight behind the measure. On Thursday, Deputy Treasury Secretary Neil Wolin wouldn’t say whether White House supported the amendment or not. In fact, he appeared to undermine it by adding that size wasn’t the most important issue in preventing banks from becoming too big to fail. American Banker reported that on Wednesday Austan Goolsbee, a top White House economist, had criticized the idea of capping the size of the biggest banks, arguing that the key problem was instead the amount of risk on their balance sheets. Goolsbee characterized the Kaufman-Brown proposal as “why don’t we smash anybody that is as big as ‘X’…and that would end too big to fail.” And although Treasury Secretary Geithner has said he supports “unambiguous limits” on leverage, the Treasury has yet to take action on the issue.

In a speech on the Senate floor this week, Kaufman argued that his amendment is necessary because, in the past decade, banks have become not just too big to fail, but too big to regulate and too big to manage. Internal risk committees couldn’t track all the trades and deals inside their banks, allowing traders to take dangerous positions. In some cases, risky bets helped sink their companies. Former Treasury Secretary Robert Rubin, best remembered for his fondness for deregulation and cozy Wall Street ties, summed up the problem: “There isn’t a way for an institution with hundreds of thousands of transactions a day involving something over a trillion dollars that you are going to know what’s in those position books.”

Size, of course, wasn’t the only problem on Wall Street. That’s why Kaufman-Brown also addressed the issue of leverage. Before the crisis, Bear Stearns was the smallest of the five investment banks. Yet it borrowed nearly $40 for every $1 of assets to turbo-charge its bets on the market—a dangerous position that contributed to the firm’s rapid demise in March 2008. Lehman Brothers, which also went under, was so over-extended that it relied on a dubious accounting gimmick, called Repo 105, to artificially lower its leverage to keep investors and rating agencies happy. “All of the former investment banks used those techniques,” Janet Tavakoli, head of the consulting firm Tavakoli Structured Finance, told Bloomberg News. “All of them borrowed too much money and were over-leveraged.”

Numerous lawmakers and outside experts say leverage limits and busting up the biggest banks are crucial reforms. Arnold Kling, a Cato Institute scholar and former senior economist at Freddie Mac told reporters that if Congress failed to rein in mega-banks like Citigroup and JPMorgan Chase, it would be akin to letting the country “go back to the system we had five years ago and tell regulators to try to regulate a little smarter.” It would, in other words, set up the financial system for a repeat of 2008’s meltdown.

Passing up the opportunity to downsize super-banks doesn’t bode well for efforts to ward off future financial crises, says Simon Johnson, former chief economist of the International Monetary Fund and a widely respected financial expert. The size and wealth of Goldman Sachs, JPMorgan Chase, and Bank of America affords those institutions the power to shape legislation and influence, if not capture, regulators, says Johnson. “I really don’t see a way forward that would effectively limit the power of these banks unless we limit their size.”