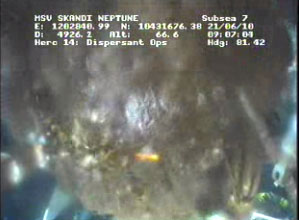 Depending on the condition of BP’s well, the Gulf oil gusher could leak up to 100,000 barrels per day, according to an internal BP document released by congressional investigators yesterday, and a senior House Democrat says that the company lied to Congress about how bad the Guld disaster could get.

While BP was reporting the 100,000-barrel worst-case-scenario figure internally, it was still giving the public and investigators a much lower estimate. Rep. Ed Markey (D-Mass.), chairman of one of the subcommittees leading the investigation, pointed out that BP representatives told his committee last month that the worst case scenario was only 60,000 barrels per day, despite the fact that the internal estimate indicates that the company has known for some time that it could be much higher.

Up until a few weeksa go, BP was still telling the public that the well was only leaking 5,000 barrels per day (after first claiming it was just 1,000. The Obama administration’s flow rate team now puts the figure as high as 60,000 barrels per day.

Yet the BP document, turned over to congressional investigators on May 24, notes that an even higher rate of leakage could occur if the blowout preventer and well-head are further compromised:

At this point, it’s hard to say whether this worst-case scenario could play out. “I think that one thing that nobody knows is the condition of the well bore from below the blowout preventer down to the actual oil field itself,” Coast Guard Admiral Thad Allen said last week. “And we don’t know, we don’t know if the well bore has been compromised or not.”

But what seems clear is that BP was well aware that the spill was much worse than they were letting on. “This document raises very troubling questions about what BP knew and when they knew it,” said Markey. “It is clear that, from the beginning, BP has not been straightforward with the government or the American people about the true size of this spill. BP needs to tell us what it will do if the well bore is compromised and 100,000 barrels per day of oil spills into the ocean.”