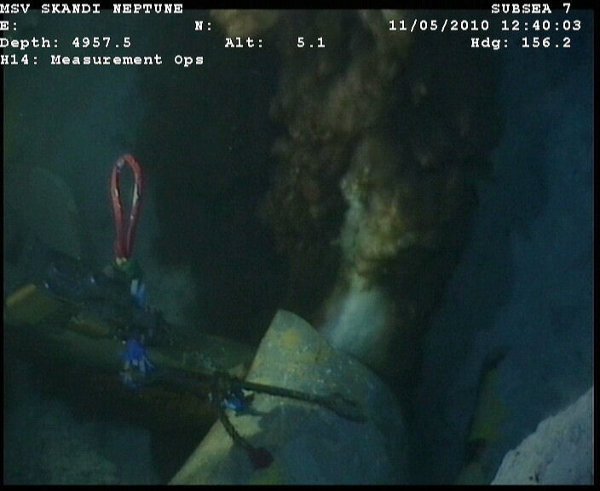 How much oil is gushing into the Gulf of Mexico? No one knows for sure, but the answer is likely far, far worse than what BP has admitted. One outside calculation estimates that the Gulf has already experienced the equivalent of six Exxon Valdez spills. And without an accurate number, there’s increasing fear that the response may fail.

BP says approximately 210,000 gallons of oil are spilling into the Gulf per day. But John Amos, a geologist at the West Virginia-based nonprofit SkyTruth, says that at least 1.1 million gallons of oil is leaking out of the well every day. His calculation is based on early NASA images of the slick that showed it covering 2,200 square miles of the Gulf, and on the estimated thickness of oil needed for the slick to be visible from space. “If it really is just 210,000 and they can’t handle that—you’ve got to be kidding me,” says Amos, who has tracked the changing estimates of the spill on his blog. “One of the world’s biggest oil companies plus the Coast Guard has been beaten by 210,000 gallons a day—do they really want us to think that?”

But even this figure may be on the low end. Under pressure, BP for the first time released video of the sea floor spill site this week. Steven Wereley, an associate professor of mechanical engineering at Purdue University, analyzed the tape and told NPR this week that the oil flow is likely closer to 3 million gallons a day. If that’s the case, the situation in the Gulf would equal more than two Exxon Valdez spills every week. The Exxon Valdez incident was, until now, the worst oil spill disaster in US history.

And the absolute worst-case-scenario? According to government data on daily production at another Gulf well, the BP spill could spew 6 million gallons per day if the wellhead that’s currently restricting the flow breaks.

One problem hampering the response effort is that figuring out how much oil is spilling is proving to be extremely complicated. Many of the estimates are based on normal operations at functioning wells, where the flow of oil is controlled. As SkyTruth’s Amos points out, the blowout has caused an unrestricted flow of oil, so it’s possible those estimates may be off-base. “I don’t know that anybody knows how much oil is coming out per day,” says David Rensink, incoming president of the American Association of Petroleum Geologists, adding, “It will probably continue at roughly this rate for a while.” Coast Guard spokesman Petty Officer Erik Swanson confirmed that it’s still operating on the 210,000 gallons of oil per day figure.

It’s also unclear how long the spill will continue. The plan to place a giant dome over the hole failed last weekend. There are now plans to try a smaller dome, or top hat, to cap the well. If that fails, BP has floated the idea of a “junk shot”—blasting debris like tire scraps and golf balls into the hole to stop the flow, then sealing it with cement.

BP is also working on two relief wells, or additional holes drilled near the spill site that would allow them to tap into the leaking well and pour cement in to stop the flow. That process could take “months,” says Rensink. He adds that relief wells aren’t commonly used and are difficult to execute. And there’s some concern that the relief wells might lead to an even bigger spill if they are unsuccessful.

SkyTruth’s Amos says that figuring out how much oil is entering the Gulf should be a top priority for the federal government. “We are going to embark on this giant head scratching exercise to figure out what the national oil spill response capacity has to be, so the next time something like this happens, we’re not overwhelmed,” said Amos. “If we can’t efficiently and immediately respond to it, then we place the economies and quality of life in the Gulf region at risk.”

House Energy Subcommittee chairman Rep. Ed Markey (D-Mass.) announced on Thursday that he is launching a formal inquiry to calculate how much oil is spilling. He said in a statement, “If you don’t understand the scope of the problem, the capacity to find the answer is severely compromised.”