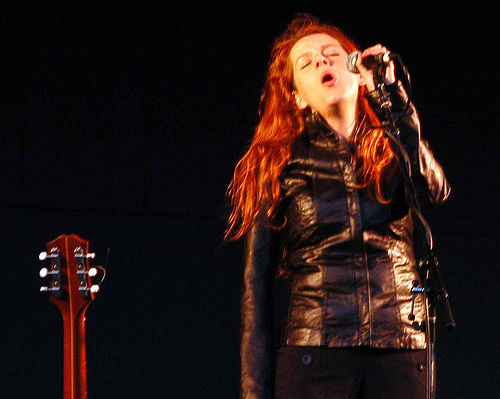 In the US, we overprocess everything, from veggie burgers to sewage to the ever-evolving exterior of Heidi Montag, whose back-scooped, chin-tucked body now resembles nothing that can be found in nature. So it’s not surprising that we process the hell out of our music as well.

Auto-Tune, which was originally created to fix pitch and tone problems in singers’ voices, has taken over the music industry, spanning virtually every genre—from rock to hip-hop to country to pop. But it didn’t stop there. Auto-Tune has dipped its synthesized hooks into TV shows and the Interwebs as well. The hit show Glee continues to be criticized for overusing it, to the point where fans felt compelled to circulate a petition. Also, comedians began a parody series called Auto-Tune the News to mock the likes of Glenn Beck and Katie Couric. This one with Eric Massa is particularly hilar.

Auto-Tune has become so omnipresent that not even our pets are safe. Behold the uh, magic, that is Kittens in Auto-Tune:

Who’s speaking out against the robotic-voice takeover? Well, Death Cab for Cutie, for one.

At last year’s Grammys, Death Cab bandmates wore tiny blue ribbons on their lapels to alert people to the rampant Auto-Tune abuses of artists like T-Pain, Kanye West, Lady Gaga, the Dixie Chicks, and a multitude of others. From MTV News:

“We’re here to raise awareness about Auto-Tuner abuse,” DCFC frontman Ben Gibbard laughed. “I think over the last 10 years, we’ve seen a lot of good musicians being affected by this newfound digital manipulation of the human voice, and we feel enough is enough.”

“When I hear auto-tune on somebody’s voice, I don’t take them seriously. Or you hear somebody like Alicia Keys, who I know is pretty good, and you’ll hear a little bit of auto-tune and you’re like, “You’re too f*cking good for that. Why would you let them do that to you? Don’t you know what that means?” It’s not an effect like people try to say, it’s for people like Shania Twain who can’t sing. Yet there they are, all over the radio, jizzing saccharine all over you. It’s a horrible sound and it’s like, “Shania, spend an extra hour in the studio and you’ll hit the note and it’ll sound fine. Just work on it, it’s not like making a burger!”

I highly suggest you read the full interview if you want to hear Case take down Celine Dion and Madonna for using Auto-Tune. Okay, one more quote; I can’t resist: “Can’t you just hit [the note], Celine? Do you have another baby book to shoot?”

But wait, this is pop music. Isn’t it supposed to sound manufactured? And who cares? As it turns out, many people. Major labels’ sales continue to slump. And in 2009, according to Paste Magazine, indie musicians like Death Cab and Neko Case were taking home more awards—and generally kicking more ass—than their mainstream, non-Auto-Tuned contemporaries.

Indie rockers aren’t the only ones raising a fuss: Jay-Z, for one, has spoken out against the popular voice-processing gadget as well. He even wrote a song called D.O.A. (Death of Auto-Tune) as a rebuttal to Kanye West’s heavily Auto-Tuned 808s and Heartbreak. Speaking to NME, he describes his aversion thusly:

“In hip-hop, our job is once a trend becomes a gimmick, to get rid of it. We’ve done that since the beginning of time. Now people are using auto-tune even in [fast food chain] Wendy’s commercials, and it’s like, ‘Oh no! That’s has to go!’ It’s become part of main culture. It’s the same thing like when the old lady in Oregon starts saying, ‘Bling, bling.’ It’s like, ‘I’m never saying that again’.”

Easier said than blung, Jay. Until we, as a culture, are ready to rally against the gimmicks and the fakery, it seems highly unlikely that Auto-Tune will be going away. The upside, of course, is that now our kittens sound like robots! If that’s not progress, then I don’t know what is.