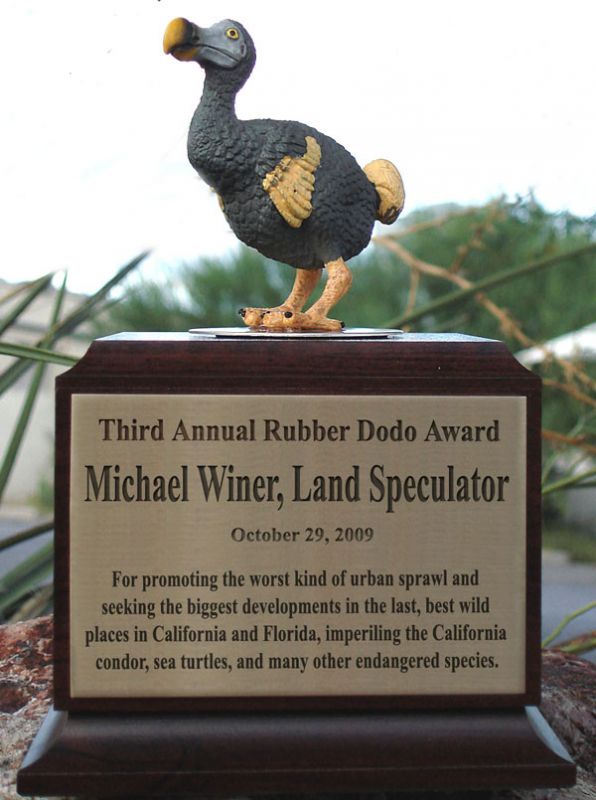 Well, that is, if you measure humans by their ability to help or hurt biodiversity. Today the third annual Rubber Dodo Award was bestowed by the Center for Biological Diversity upon Michael Winer, portfolio manager for the giant real-estate investment firm Third Avenue Management, or TAREX.

The CBD’s Rubber Dodo memorializes the person who’s done most to drive endangered species extinct. The 2007 winner was Interior Secretary Dirk Kempthorne. In 2008, Alaska Governor Sarah Palin got the dishonor.

So what has heretofore unknown Michael Winer done to deserve the ignominy? Under Winer’s leadership, says the CBD, TAREX has become the largest stockholder of companies driving the development of the largest private landholdings remaining in Southern California and Florida. These splendid lands also happen to be home to some of the highest numbers of endangered species in North America:

According to Adam Keats, director of the CBD’s Urban Wildlands Program:

“Under Winer’s money-obsessed leadership, TAREX has become the poster child for unsustainable, endangered-species-killing sprawl. He specializes in finding massive, remote estates far from urban centers and turning them into a sea of condos, malls, golf courses, and resorts. There is good reason that even Wall Street commonly calls TAREX a ‘real-estate vulture’.”

In California, Winer is a driving force behind the Tejon Ranch Company’s bid to build two new cities 50 miles north of Los Angeles—likened to dropping a city the size of Boulder Colorado into the Arctic National Wildlife Refuge.

What’s at stake in Tejon? Oh, only 270,000 acres at the convergence of five geomorphic provinces and four floristic regions. Plus federally designated California condor critical habitat, home to 23 known types of plant communities, home to 20 state and federally listed species, a unique “oak laboratory” for more than a third of all California oak species.

The Center for Biological Diversity would rather see Tejon Ranch be preserved as a new national or state park and preserve, to protect a bounty of native plant and animal communities, cultural and historic features, and scenic vistas.

How about we offer a carrot? Name it the Michael Winer Corrective Karma National Park?

BTW, this leads me to one of my pet, oddball, make-the-world-better schemes. In thinking about the most environmentally-friendly way to dispose of ourselves after death, why not do like the Tibetans, who practise sky burials? In other words, make ourselves food for vultures, specifically, California condors. Michael Winer, when your time comes, could you lead the way, in a park named for you?