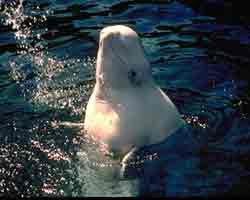 As a fierce high school basketball player, Alaska Governor Sarah Palin was dubbed “Sarah Barracuda,” a nickname that was revived on the campaign trail last year, when she served as John McCain’s enforcer. Now the “Barracuda” is picking a fight with one of the biggest mammals in the sea.

Last week, the state of Alaska announced it plans to mount a legal challenge to the listing of the Cook Inlet beluga whale under the Endangered Species Act. (Placing the belugas on the endangered list requires a review of federally funded or permitted activities that could affect the health of the whales, the establishment of a recovery plan, and the designation of “critical habitat.”) This marks the second time in a year that Palin’s administration has squared off with the federal government over an ESA listing. Over the summer, her administration sued Interior Secretary Dirk Kempthorne after his agency conferred threatened status on the polar bear.

In 1994, there were some 650 Cook Inlet belugas living off the coast of Anchorage, but their numbers were nearly halved by 1997. This sharp decline was largely attributed to overharvesting by Native hunters, and by 2005 this already small whale population reached an all-time low of 278, by one government estimate. Presently, scientists at the National Oceanic and Atmospheric Administration (NOAA) estimate the number of Cook Inlet belugas at 375.

In 2000, the whales were protected under the Marine Mammal Protection Act, but government scientists eventually concluded that this wasn’t enough. “In spite of protections already in place, Cook Inlet beluga whales are not recovering,” James Balsiger, the acting assistant administrator for the NOAA’s Fisheries Service, said in October, announcing that the whales had received endangered species protection.

Palin begs to differ. Her administration argues that that the belugas are faring just fine under the protections in place, and the population is even beginning to show signs of recovering. For this reason, the state of Alaska contends that additional regulation is unnecessary. “The State of Alaska has worked cooperatively with the federal government to protect and conserve beluga whales in Cook Inlet,” Palin said last week. “This listing decision didn’t take those efforts into account as required by law.”

At the heart of Palin’s objections are concerns that additional safeguards will interfere with oil and gas development, among other lucrative projects. “I am especially concerned that an unnecessary federal listing and designation of critical habitat would do serious long-term damage to the vibrant economy of the Cook Inlet area,” Palin said in 2007. Similar fears led Palin’s administration to launch a legal challenge in August to the listing of polar bears as a threatened species. (And it was no surprise when a host of business groups, including the American Petroleum Institute, followed her lead. The cases have have been consolidated, and the litigation is ongoing.)

Objecting to ESA protections on economic grounds is one thing, but Palin’s team has in the past sought to cast doubt on the science underlying the listings. Fighting back against efforts to list the polar bear, for instance, her administration cited the work of global warming skeptics, one of whom acknowledged receiving funding from the American Petroleum Institute and ExxonMobil for his work.

In this latest legal challenge, Palin’s administration has attacked the accuracy of beluga population estimates, citing the “questionable use of computer population modeling.” And it has challenged “the contention that the belugas in Cook Inlet are a separate and distinct population from other belugas.” Meanwhile, the state’s claim that Cook Inlet beluga’s are recovering is at odds with the judgments of federal scientists, whose “systematic surveys,” according to the whale’s ESA listing [PDF], “indicate this population is not recovering.”

In September, the Center for Biological Diversity, which waged a decade long fight to win protection for the Cook Inlet beluga and petitioned to secure ESA safeguards for the polar bear, awarded Palin with its “2008 Rubber Dodo Award“—given annually to those the organization deems a threat to imperiled plants and animals. “Governor Palin has waged a deceptive, dangerous, and costly battle against the polar bear,” said the organization’s executive director, Kieran Suckling, at the time. “Her position on global warming is so extreme, she makes Dick Cheney look like an Al Gore devotee.” He added: “Palin’s insistence that Arctic melting is ‘uncertain’ is like someone debating the theory of gravity as they plunge off a cliff. It’s hopeless, reckless, and extremely cynical.”

Her latest ESA attack has drawn more sharp words from the group, and other conservation organizations, which are watching Palin’s next moves closely. Brendan Cummings, the Center for Biological Diversity’s oceans program director, tells me that he expects Palin to go forward with her suit in March, once the clock runs out on the 60-day Notice of Intent to Sue [PDF] filed by her administration. “We will move to intervene in the court case to defend the listing rule,” he says. “As a purely legal matter, and as a question of sound science, Palin’s challenges (both beluga and polar bear) have no merit. But we have to treat any lawsuit as a serious threat.” Cummings accuses Palin of being “willing to sacrifice endangered whales on the alter of oil company profits.” The Barracuda, he contends, “must be suffering from an Ahab complex.”

Photo courtesy of the National Oceanic and Atmospheric Administration.