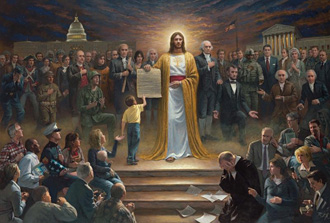 (UPDATE: Looks like McNaughton’s site is down from excessive traffic. But check out this parody version. And, as a commenter below points out, there’s also a haiku contest to be had regarding the painting.)

For as little as $130, fellow Americans, you can take home a canvas reproduction of this beauty of a painting depicting your country’s noble roots. “One Nation Under God” is a new piece by artist Jon McNaughton of Utah, who says he got his inspiration from a vision he received during the 2008 elections.

Front and center, the painting features Jesus Christ, creator of the heavens and earth and bearer of the US Constitution. (A few online wags have already compared the likeness to that of Viggo Mortensen’s Aragorn.) At his feet on his right you have the good guys—the farmer, the Christian minister, the US Marine, the handicapped child, the black college student, the schoolteacher who vaguely resembles Sarah Palin. You also have the young white man who represents the rising generation.

On the other side—Jesus’ left side—is another set of characters, including a professor holding a copy of Darwin’s Origin of the Species, a politician, a lawyer counting his money, a liberal news reporter, and a Supreme Court Justice weeping over Roe v. Wade. Oh, and who could forget Satan lurking in the shadows.

No matter what your political or religious leanings, you have to admit the details and symbolism here are impressive and painstaking. My favorite part is that the website lets you explore the painting with your mouse and get detailed explanations of each element. If you’re wondering why, for instance, the immigrant has his hand in the air, McNaughton explains: “I wanted him to have a look of shock when he realizes where the source of America’s greatness comes from as he sees Christ holding the Constitution.”

It is also worth noting that if you look very closely, there are minorities in the background! Yes, in the upper left, you have Sequoyah, Harriet Tubman, Frederick Douglass, and Black Union Soldier. American Soldier is also black, as is College Student, and then of course there is Immigrant, who appears to be of Asian descent. Enjoy.

Tip of my colonial-styled hat to Andrew Sullivan for this excellent find. And if you’ve just figured out what you’re going to get your entire family for Christmas (not the holidays, you heard me—CHRISTMAS), well then, you’re very welcome.