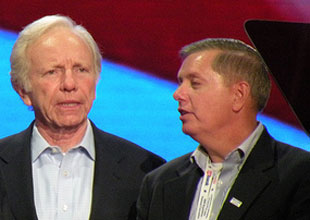 As early as Friday, the Supreme Court could clear the way for the release of dozens of photos of detainee abuse. But Sens. Joe Lieberman (I-Conn.) and Lindsey Graham (R-S.C.) are working to make sure the pictures never see the light of day, even if the high court opts not to hear the government’s appeal in ACLU v. Department of Defense.

In June, Lieberman and Graham proposed a law that would specifically preempt the release of photographs depicting detainee abuse by carving out an exemption to the Freedom of Information Act (FOIA). (I explained why that’s such a terrible idea here.) House liberals killed the Lieberman-Graham bill, but now it’s back from the dead. House and Senate conferees have approved language in a Homeland Security appropriations bill that would give the Defense Department the power to suppress essentially any photos of detainee abuse it doesn’t want the public to see.

The ACLU is, needless to say, upset that Congress (with the White House’s support) may undercut FOIA and render meaningless the entire court fight over the photos. “It’s frustrating on many levels,” Jameel Jaffer, the director of the ACLU’s National Security Project, told Mother Jones. “The public has a right to see the photos. They would shed light on questions of accountability. We don’t think that democracies are made stronger when they conceal evidence of their own wrongdoing.”

Jaffer isn’t optimistic about the prospects of stopping the provision this time around. “Barring some groundswell of opposition, this provision will become law,” he says. The ACLU is considering what its options might be if that happens, Jaffer says.

The ACLU still has some reason for hope. Rep. Louise Slaughter (D-NY), the chairman of the powerful House Rules Committee, was a key figure in the initial fight against the photo suppression bill, and she could use her powerful position to try to stop the bill again. A spokesman for Slaughter says it’s not over yet, because the “bill is still being hashed out.” He notes that Slaughter “remains opposed to any weakening of FOIA and believes that release of the photos would not harm our standing in the world.” In the face of a White House, Pentagon, and Senate that are unified in their support for suppressing the photos, can one congresswoman make a difference?