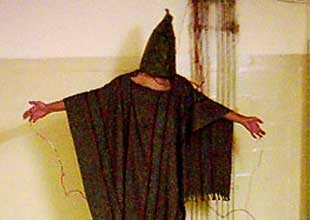 For months, the Obama administration has been fiercely fighting to prevent the publication of around two dozen photos of American soldiers abusing detainees in Afghanistan and Iraq. On Tuesday the Supreme Court justices will meet privately to weigh whether to hear the matter—and if they decline, the controversial images could be released within weeks.

The American Civil Liberties Union (ACLU) has been seeking the images under the Freedom of Information Act (FOIA) as part of an effort to prove a pattern of unlawful detention practices. In March, the Second Circuit Court of Appeals ordered the government to turn over the photographs. The Obama administration initially promised not to contest the ruling—Press Secretary Robert Gibbs called it “hopeless to appeal”—but then filed a challenge on May 13, petitioning the Supreme Court to overturn the appellate court’s decision.

In its brief asking the Supreme Court to hear the case, the government contends that making the photos public would endanger troops and civilians in Iraq and Afghanistan because terrorists could use the images for propaganda and recruitment. The administration argues that this risk allows it to legally withhold the photos under a FOIA exemption for materials “compiled for law enforcement purposes” that if released “could reasonably be expected to endanger the life or physical safety of any individual.”

This is part of the argument the Bush administration presented earlier to the appeals court, to no avail. The three-judge panel ruled that the government was interpreting the term “any individual” so broadly that even “remote and speculative risks” could be interpreted as a near certainty. “No one person can reasonably be expected to die in a car accident,” said the opinion, “but it is certain that someone somewhere in the world will die in a car accident every day.”

Steven Aftergood, a secrecy expert at the Federation of American Scientists, says that while the Supreme Court will give “some weight” to the administration’s warning of a national security risk if the pictures are published, the Justice Department’s actual legal argument is “very weak.” The court may decide “that whatever it might prefer as a policy matter, the law does not support the administration’s position,” Aftergood says. “The administration itself knows this, which is why they were hoping Congress would rescue them with legislation that would settle the matter.”

The legislation in question is an amendment proposed by senators Joe Lieberman (I-Conn.) and Lindsey Graham (R-S.C.) that would exempt all photos of detainee treatment from release under the FOIA. Graham and Lieberman attached this measure to the supplemental war-funding bill in May, but House liberals forced the provision to be dropped from the final legislation. “There are a number of very key House Democrats who are willing to go to great measures to protect the FOIA from being carved up and from exceptions being stuck into the act every time there’s a particular document someone doesn’t want exposed,” says Christopher Anders, an ACLU senior legislative counsel. “Louise Slaughter, Barney Frank, Jerry Nadler, and a number of others. I know that if the legislation pops up again there’s a core of influential house members who we think will go to bat again if they have to.”

There’s one more trick the Obama administration could try if the Supreme Court denies their petition: They could designate the photos as classified national security documents—which might exempt them from FOIA disclosure.The ACLU would challenge that move in court, too, prolonging the legal tug-of-war. “We don’t think there is a good argument for classifying the photographs that we know about,” says Jameel Jaffer, an ACLU lawyer working on the case. That wouldn’t necessarily stop the Obama administration from giving it a try—at the very least, such a move would buy it time.

Of course, it’s impossible to predict what the Supreme Court will do: On executive power cases the justices don’t always divide along familiar ideological lines, and no one knows quite what to expect of new justice Sonia Sotomayor, who has a relatively short paper trail when it comes to questions of presidential authority. “If it were altogether hopeless,” says Aftergood, the government “wouldn’t even bother” appealing.

If the justices decline the case, that could potentially pave the way for the release of many more similar images. But if the Supreme Court does take up the matter, the biggest risk is not that these particular photos will be withheld, but that FOIA will be gutted. If the justices in this case reverse the appeals-court decision, then whenever the government wants to withhold material, it would only have to prove that there’s a chance that someone, somewhere in the world, might be endangered by the disclosure. That’s a pretty easy standard to meet.