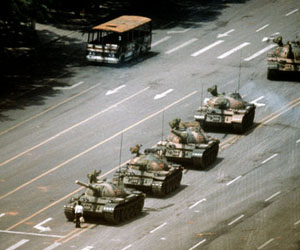 June 2009 could be a big month for democracy on the world stage, with digital technology playing no small part.

With a landmark speech in Cairo on Thursday, Barack Obama will continue his quest to connect with the Muslim world and repair the grave damage done to U.S. standing under George W. Bush. It remains to be seen how much he might also press for government reform by Hosni Mubarak. Egypt is considered a crucial U.S. ally in the Middle East, but more light has been shed on its dark human rights record particularly since 2007, when a video circulated on the Internet showed a man being sodomized with a stick in a Cairo police station.

In Iran later this month, the 10th presidential election could shake things up significantly for a country whose own population is very much displeased with life under Mahmoud Ahmadinejad. The regime has failed to suppress the use of Facebook and Twitter on behalf of the reformist movement.

This week also brings the 20th anniversary of the massacre at Beijing’s Tiananmen Square, where on June 4, 1989, thousands of Chinese pro-democracy protesters were wounded and killed at the hands of the Chinese army. One unknown man, instantly made an indelible historical figure, temporarily halted the killing machine in its tracks.

The iconic image of him will again saturate media around the globe in the days to come. (Several versions of it were captured by photojournalists in the vicinity then; the above was taken by Stuart Franklin.) To this day the identity and fate of the so-called Tank Man, who was whisked away by Chinese agents to end the extraordinary standoff, are unknown. (For more, watch this fascinating 2006 documentary, “The Tank Man,” from Frontline.) In the aftermath, the Chinese government maintained that “not one person” was killed in Tiananmen Square, and has depicted the uprising as a “counterrevolutionary rebellion” ever since. As author Yu Hua pointed out in an essay this weekend titled “China’s Forgotten Revolution,” today the event is little known to the nation’s youth.

This is the first time I am writing about Tiananmen Square. I am telling my story now because 20 years later—the anniversary is June 4—two facts have become more apparent. The first is that the Tiananmen pro-democracy protests amounted to a one-time release of the Chinese people’s political passions, later replaced by a zeal for making money. The second is that after the summer of 1989 the incident vanished from the Chinese news media. As a result, few young Chinese know anything about it.

Twenty years later, hopefully the above image and the truth about its bloody context will percolate widely among China’s younger generations. Could the explosive spread of the Internet be the key?

In terms of state media control, China in some ways is a very different place today than even just a few years ago, according to The Washington Note’s Steve Clemons. Following what he describes as a “very candid” diplomatic meeting recently, as well as some guidance from one unnamed Chinese youth, Clemons shared insight about the limitations the Chinese government faces in trying to control an uncontrollable force:

In fact, this young person walking through Internet access issues with me said that Chinese young people can essentially access anything that the government might try and does block. This person who works in international affairs says that the ability of the Chinese government to significantly control access to web-based content is quickly eroding.

And as a result of very interesting and candid discussions with the Vice Minister of the State Council Information Office, Qian Xiaoqian, I believe that many Chinese government officials know that the practice of blocking this site or that is undergoing significant change or reform.

At the end of 2008 China was home to nearly 300 million “netizens,” or regular Internet users, with 162 million blogs and 117 million mobile Internet users, according to Clemons. By the end of this month, Chinese authorities predict another 20 percent jump in those figures.

“Terminals are everywhere,” Clemons says. “The newspapers are actually full of stories about people critiquing government officials, standards, building and infrastructure quality. It’s fascinating—not perfect. I do get the sense that political entrepreneurship is mostly a non-starter here, but even on that front, I have found several key cases where even that form of self-censorship is changing for the better.”

A very relative assessment, of course—seemingly still plenty far from the day when what happened at Tiananmen Square is understood widely across China. But amid the continuing technological revolution, that day could be on the horizon.