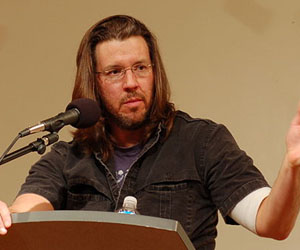 On Tuesday, Little, Brown and Company publishes a book version of “This Is Water: Some Thoughts, Delivered on a Significant Occasion, about Living a Compassionate Life,” the celebrated commencement speech David Foster Wallace gave to the 2005 graduating class at Kenyon College. The pocket-sized book breaks up the nearly 4,000-word speech into digestible pieces on the page, some as brief as a single phrase. It’s an intriguing approach: In one sense, practical to publishing the essay in book form while drawing out its epigrammatic layers. At the same time, it seems rather un-DFW—contrary to the hyper-digressive, cascading prose for which he is so well-known.

Whether Wallace would approve of the presentation we probably can’t know. But it highlights a radiant directness that was often in danger of obscuring beneath his towering intellect. (It’s worth noting that there are some subtle differences to be found in other versions of the commencement speech floating out there; I contacted the publisher seeking clarification on how the text was prepared, but a publicist responded that Wallace’s longtime editor, Michael Pietsch, was declining to be interviewed about the book.)

Wallace’s focus was on the far from easy task of living life consciously in the adult world. He begins with a “didactic little parable-ish story,” as he puts it, about young fish who are oblivious to the environs through which they swim. More than just challenging the conventions of the commencement genre, Wallace makes use of them with a fierce sincerity: “I submit that this is what the real, no-bullshit value of your liberal arts education is supposed to be about: How to keep from going through your comfortable, prosperous, respectable adult life dead, unconscious, a slave to your head and to your natural default setting of being uniquely, completely, imperially alone, day in and day out.”

Segments like these carry an added poignancy in the wake of Wallace’s death by suicide last fall at the age of 46. Rather than a matter of morality or religion or the afterlife, he went on to tell the young graduates, “the capital-T Truth is about life before death. It is about making it to thirty, or maybe even fifty, without wanting to shoot yourself in the head.”

More striking, though, is his evocative insight and humor. If the students really do learn how to think and pay attention in life, he tells them, “It will actually be within your power to experience a crowded, hot, slow, consumer-hell-type situation as not only meaningful, but sacred, on fire with the same force that made the stars—compassion, love, the subsurface unity of all things. Not that that mystical stuff’s necessarily true: The only thing that’s capital-T True is that you get to decide how you’re going to try to see it.”

The pleasure of experiencing Wallace’s speech again underscored a realization I had when reading D.T. Max’s lengthy look back at Wallace’s life: The world deserves a published collection of David Foster Wallace’s correspondences, too. Various bits of it appearing in the recent New Yorker article—with fellow writer Jonathan Franzen, his literary agent Bonnie Nadell and others—cast additional light on Wallace’s humanity and highly emotive lexicon.

There is much insight and lyricism to be found in Wallace’s fiction, but it can be hard to track down and enjoy amid all the dense, cerebral text. He played language not as an instrument but as a postmodern orchestra, and it could get too cacophonous. I admired some of Wallace’s earlier short stories, but I’ve always thought that he was at his best with essays and literary journalism. It seems the epistolary form (actual letters as well as email) brought out a more direct spirit of his, too, however painful. While in a deep rut in May 1990 he wrote to Franzen:

Right now, I am a pathetic and very confused young man, a failed writer at 28 who is so jealous, so sickly searingly envious of you and [William] Vollmann and Mark Leyner and even David fuckwad Leavitt and any young man who is right now producing pages with which he can live, and even approving them off some base clause of conviction about the enterprise’s meaning and end.

There was also a vivid kind of humor: In another correspondence with Franzen about 15 years later, this time regarding his struggles with a novel to be called “The Pale King,” Wallace wrote, “The whole thing is a tornado that won’t hold still long enough for me to see what’s useful and what isn’t … I’ve brooded and brooded about all this till my brooder is sore.”

A former editor recalls Wallace also comparing the writing of the novel, incomplete at the time of his death, with “trying to carry a sheet of plywood in a windstorm.”

For me, one of Wallace’s most memorable essays was published in August 2006 in the magazine Play, in which he profiled tennis titan Roger Federer.

A top athlete’s beauty is next to impossible to describe directly. Or to evoke. Federer’s forehand is a great liquid whip, his backhand a one-hander that he can drive flat, load with topspin, or slice—the slice with such snap that the ball turns shapes in the air and skids on the grass to maybe ankle height. His serve has world-class pace and a degree of placement and variety no one else comes close to; the service motion is lithe and uneccentric, distinctive (on TV) only in a certain eel-like all-body snap at the moment of impact. His anticipation and court sense are otherworldly, and his footwork is the best in the game—as a child, he was also a soccer prodigy. All this is true, and yet none of it really explains anything or evokes the experience of watching this man play. Of witnessing, firsthand, the beauty and genius of his game. You more have to come at the aesthetic stuff obliquely, to talk around it, or—as Aquinas did with his own ineffable subject—to try to define it in terms of what it is not.

It remains a memorable passage because it illumes not only Wallace’s profound talent, but also, in some sense, the linguistic-spiritual puzzle he died still trying to solve. He tells you it can’t be done and then he nearly does it, brilliantly.

The back cover of “This Is Water” asserts that the essay delivered at Kenyon College was Wallace’s answer to “the challenge of collecting all he believed about life and lasting fulfillment into a brief talk.” The inflated language of marketing copy, it would seem—Wallace’s prolific, restive consciousness probably could never be so perfectly distilled. A deeper look at his personal correspondences, meanwhile—when presumably he was writing more free of the crushing performance pressures he put on himself—could only add to the picture of a life and work tragically cut short and revered by so many.