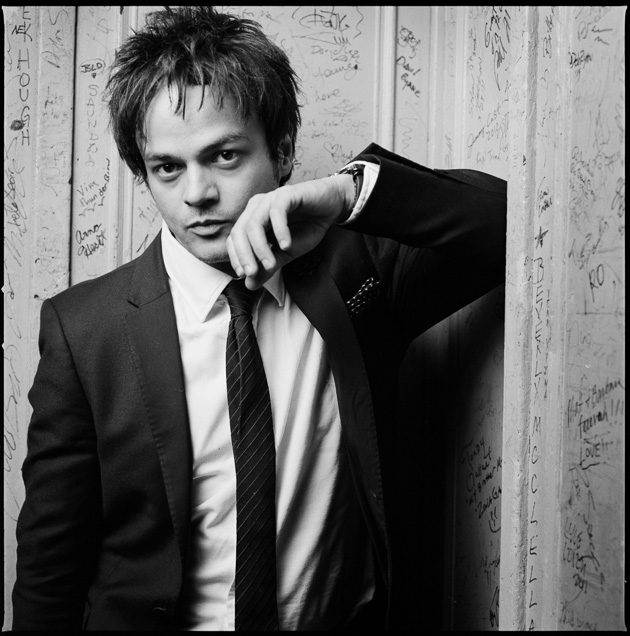 The British jazz pianist, singer, and songwriter Jamie Cullum rose to fame in 2003 with his major-label debut, Twentysomething, which sold more than 2.5 million copies. With successful follow-up albums, he has earned the distinction, at age 35, of being the highest selling UK jazz artist ever. On his BBC Radio 2 show—modeled on the work of British radio greats Gilles Peterson and John Peel—Cullum passionately curates a wide spectrum of jazz and improvisational music. His charm and energy, both on the air and as a stage entertainer, has earned him a lot of loyal fans, and opening slots for Billy Joel’s recent shows at Madison Square Garden.

“A lot of my ideas come from being a music geek. I think a bit like a radio DJ might.”

Against a traditional big band set-up, his recent performance at the New York City’s Beacon Theater involved pogo dancing, beat-boxing, a flying leap off the piano and entreaties to the audience to take more cell-phone videos. He was touring in support of his seventh studio album, Interlude, produced by fellow old-soul-with-youthful spirit Benedic Lamdin—also known as Nostalgia 77. Interlude was recorded straight to tape with a live orchestra. It features a mostly-classic jazz repertoire, with covers of Sufjan Stevens and Randy Newman thrown in for good measure.

Cullum will return stateside in August for the Newport Jazz Festival and a performance at the Hollywood Bowl in Los Angeles.  I photographed him at the Beacon Theater. We spoke on the phone later about the freedom of limitations, the predictability of rock, and Billy Joel‘s staying power.

Mother Jones: In your musical arrangements, I hear a lot of connections back and forth between jazz, modern rock, and R&B.

Jamie Cullum: I look at it a bit like joining the dots. Gilles Peterson has had as much influence on me as any musician. He has helped form my tastes through years of listening to his radio show. He does this thing where he kind of joins the dots between styles. Getting into heavy metal got me into Jimi Hendrix eventually, and as I was getting into Hendrix, I discovered Frank Zappa, and as I was getting into Zappa, I heard him referencing quite a lot of jazz things, prog-rock and improvisation. Before you know it, I’d found Herbie Hancock, Art Tatum, Thelonius Monk, and Nat King Cole. A lot of my musical ideas come from being a music geek. I think a bit like a radio DJ might.

MJ: You’ve opened for Billy Joel at several recent Madison Square Garden shows. Did you gain any insights that you might want to apply to your own approach?

JC: You see the power of having such a catalog of hit songs. His songs really live in people’s bones and when you see 20,000 people singing to “New York State of Mind” or “We Didn’t Start the Fire,” or any of his millions of hits, you get a sense of the community that creates. Very few people can make Madison Square Garden feel small. He doesn’t amplify his gestures with big stage production. He walks onto the stage and goes, “Welcome to the Garden. What songs do you wanna hear? Hey, let’s play that.” He is himself. He’s naturally funny, a bit of a joker, a wise guy kind of vibe. He’s lovely, he’s a human being, he’s well aware of his own faults and his own flaws. He seems like one of us, you know? Everyone feels like they’re standing next to the piano with him. That is very much a gift.

“Improvisation appeals to my personality. I’m an improviser at life, anyway. I don’t do well with really set plans.”

MJ: You cover a lot of rock and R&B, and are influenced by it, but you also have a pretty traditional approach to jazz, especially on this album.

JC: I think I fell in love romantically with the idea of the jazz musician before I became a jazz musician. You know, reading Kerouac as young teenager and looking at the photos of Chet Baker and Count Basie by William Claxton—the iconography of it and how different it was to where I grew up—got to my young soul. But the level of mastery you need to be a jazz musician—incidentally, I feel I’m only 10 percent of the way there—is very appealing. Improvisation means not having to do the same thing twice, which very much appeals to my personality. I’m an improviser at life, anyway. I don’t do well with really set plans; I thrive on unpredictability. I love the language of jazz, the fact that you can take interesting musical turns and twists that are informed by some musical mastery and education.

When I was in rock bands, I loved the image of the rock star and carrying the guitar, being on the road and wearing a leather jacket, and that kind of thing. I was in a band that supported Paul Weller on tour; we were having an amazing time. But it became to me a little bit predictable: After you’ve done 10 shows, you’ve done it the same way musically every time.

MJ: With Interlude, you’ve removed your own songwriting and some of the modern instrumentation you’ve had in the past from the equation. What were you going for?

JC: Interlude is very much a collaborative album between myself and the producer, Ben Lamdin. I was in love with the way his records sounded. We booked three days in the studio with him and his band; my label didn’t know anything about it. I said, “Look, I want to live in your world for three days.” We didn’t know if it was going to be an album, maybe just a couple of EPs or something we put out on his small record label under a different name. I didn’t have the chance to think about it.

But the truth of it is that limitation, and giving ourselves less options, is the most freeing thing ever. You sit there and you go, right, we’ve got these instruments, we’ve got this amount of time, we’re not even going to be able to mix the album because we’re all playing in the same room, so this is how it’s gonna sound. But let’s get this incredible repertoire, we’ll get great performances, and it’s gonna be imperfect, you’re gonna hear what the room sounds like, you’re gonna here the count-off, you’re gonna hear the beer being drunk between solos. I’ve learned a lot about what I want to do on my next record by doing things that way; giving yourself certain limitations gives you the freedom to do something really special.

“I couldn’t be aloof if I tried. Being aloof seems very cool—I would love to be a bit aloof, but I’m shit at it.”

MJ: You recorded with all live takes. How did that affect the process?

JC: We did it in two and a half days. We weren’t even listening back to takes after we did them. If it felt good, we would move on. So rather than kind of picking through it and going, “Well, I don’t like that,” we’d all kind of look around and say, “You know, that was good.” We’d trust the feeling. And it keeps the energy going, it keeps an excitement in the room, because you’re always moving forward.

MJ: At your Beacon Theater show, after you encouraged people to come up closer, I really got a sense of the communal nature of your performance. Not to diminish it, but there was a sing-along element.

JC: Obviously there are some of my originals that the audience knows really well and will literally sing along to. But one of the things that I think makes it communal is that on stage, I’m also a fan. I wasn’t the kid who stood in front of the mirror with a hairbrush for a microphone wanting to be famous. And when I’m on stage I don’t feel a big audience-performer divide. I’m enjoying watching my musicians play, and we often have guest musicians, so I’m enjoying them too. And I think the audience can feel my passion for what is going on. I couldn’t be aloof if I tried. Being aloof seems very cool—I would love to be a bit aloof, but I’m shit at it.

MJ: So, has your manager been pushing to get you a movie role as a heartthrob vampire or anything like that?

JC: [Laughs.] I don’t think so. I’m not really quite dark in the spirit enough. Not yet.

In Close Contact is an independent documentary project on music, musicians, and creativity.