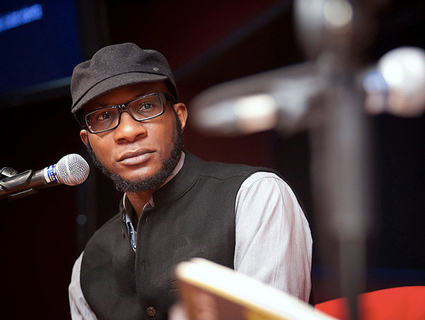 “Mrs Dalloway said she would buy the flowers herself. Pity. A signature strike leveled the florist’s.” Thus begins a series of tweets from the writer Teju Cole, each one a famous novel’s opening line rudely interrupted by drones. He calls them “drone short stories.”

Discursive, allusive, and always thought-provoking, @tejucole stands out in a Twitterverse crowded by hashtags and throwaway jokes. The Nigerian American writer published his debut novel, Open City, to great acclaim in 2011, but Cole may be best known (online, at least) for his Small Fates tweets about Lagos. Small Fates is inspired by the French journalistic tradition of fait divers, roughly equivalent to “news briefs.” Perfunctory accounts of crime from Nigerian newspapers are transformed with a literary, humanizing twist: “Love is so restless. When T. Dafe’s girlfriend dumped him in Surulere, he went at her with a pen knife until she was no more.?”

His drone vignettes also breathe empathy into anonymous killings that happen far away. And Cole, also an occasional Twitter essayist, previously posted a a series of tweets linking drones, Downton Abbey, the IMF, and Virgin America. It’s easy to ignore drone strikes quietly happening halfway across the world; it’s harder to ignore them when they invade our familiar cultural turf.

1. Mrs Dalloway said she would buy the flowers herself. Pity. A signature strike leveled the florist’s.

2. Call me Ishmael. I was a young man of military age. I was immolated at my wedding. My parents are inconsolable.

3. Stately, plump Buck Mulligan came from the stairhead, bearing a bowl of lather. A bomb whistled in. Blood on the walls. Fire from heaven.

4. I am an invisible man. My name is unknown. My loves are a mystery. But an unmanned aerial vehicle from a secret location has come for me.

5. Someone must have slandered Josef K., for one morning, without having done anything truly wrong, he was killed by a Predator drone.

6. Okonkwo was well known throughout the nine villages and even beyond. His torso was found, not his head.

Intrigued by all of the above, I telephoned Cole to ask him what it means to be a writer in the 140-character era.

Mother Jones: What was the inspiration for your drone stories?

Teju Cole: I had been thinking so intensely so much about the global war on terror, especially the heavy silence that has surrounded the use of drones to assassinate people outside this country. I just realized that we’re facing here is an empathy gap. And this was just another way to generate conversation about something that nobody wanted to look at. The weird way that things come together is that when I wrote those drone tweets, the subject was not on the front page of papers. Two, three weeks later, it’s on the front page of the New York Times and everybody is talking in a very direct way because the release of this white paper.

MJ: I suppose this sudden attention over a document that justifies the killing of Americans by drones would be an example of the empathy gap.

TC: The big idea behind it was to somehow participate in the discussion about justice. What does it mean to be just to the others out there whose lives we do not think about. One of the answers I came up with was simply tell their stories.

Children are a gift from God. In the returns department: a baby girl, left by the side of Effiom Ekpo Street in Calabar.

MJ: A lot of the Small Fates, even though they tell a terrible story, are darkly humorous.

TC: I’ve always referred to it as a troubled project in the sense that I’m trying to tell stories about people who not are here in a way to tell their own stories. I’m trying to speak about an environment I knew well, but I’m aware that I’m dealing with very dark material. I’m pointing out the irony of what we would wish for ourselves and what actually ends up happening. I’m not really telling jokes with these things, but there is sort of that humor about how terrible our fate it. I don’t put a laugh track on my tweets. If you laugh, in a way, that’s on you. It’s just trying to be true to life, which is extremely absurd, and it laughs alongside our suffering. But I think part of it was an exploration of my own fears about death, about pain, about the fact that no matter how much you wiggle and protest, at some point it will be your turn—and it sort of happens in this absurd way.

Police will never catch Ojo, alias Paraga, one of Akure’s most notorious criminals. With a noose, he escaped to the afterlife.

MJ: Twitter been around long enough that we now have literary Twitterers. Many have been fictional personas or serialized stories—like Jennifer Egan’s for The New Yorker—but the small fates are very discrete and atomized. It’s really weird to see them sprinkled into a Twitter stream full of Justin Bieber and cat videos. Do you consider that context when you’re writing?

TJ: Part of the appeal of Small Fates is that I could put something into people’s day that I knew was completely different from what they were seeing. It wasn’t the only serious thing in their timeline, but it would be the only thing that would arrive with this extreme lack of context—because you have a context for the jokes, you have a context for the news reports that had links, and then the usual “I’m reading this book” or “I just ate the most delicious pizza” or whatever. That’s sort of the voicing of Twitter. And then, you know, the Small Fates sort of arrive with a kind of intricate and decontextualized detail about lives that you knew nothing about. Each Small Fate was completely new and completely out of context, and that sort of helped them stand on their own.

Wives are flammable, a police inspector, Wasiu, of Okokomaiko, has found.

MJ: Why did you stop doing Small Fates?

TJ: I had wrote a few thousand of these, and I felt like I had sort of delivered. I didn’t want to be tied down to—how do I put it…the more followers you have, the more interesting it gets what reader response means. It’s almost as if it was time to stop because too many people were enjoying them. You know what I mean? The temptation to now entertain is absolutely not what I’m doing. I’m trying to do the opposite of entertaining.

MJ: You’re American, but because of your subject matter, you’re often identified with Nigeria. How do you feel about that label of Nigerian writer or “African writer”?

MJ: Do you divide your time between New York and Nigeria?

TJ: I’m mostly based in New York. I travel to Nigeria every year, sometimes more than once a year because I’m writing a book about Lagos. I feel as if, these days, there’s sort of two different senses of home for me. One is that very vivid sense I get when I’m coming back on a plane after having been outside New York City. Because of the flight path that comes into LaGuardia in particular, I can actually see my home in Brooklyn from the plane. I can pinpoint it. The second sense of home is where there’s good wifi, whether I’m in a hotel room in Berlin or I’m hanging out with people in Nigeria or wherever.

MJ: You’re also a photographer, and you’ve written about Instagram. Have you played around with Vine?

TJ: I am on Vine. It’s another early-adopter kind of thing. I’m trying to figure out what I’m going to do with it. What’s interesting about it is that everybody knows these amazing restrictions we’ve put on it: I have to use my iPhone, I can only use one continuous take, I cannot edit afterwards, I cannot put sound afterwards. It becomes as appealing as a kind of ink painting, where the intensity and beauty of the art is shown in what you can do spontaneously or seemingly spontaneously. The ephemeral part of it is very appealing—in the same way that people think of Twitter as not worth taking trouble over, so that the people who do take trouble over it, strangely enough, now have a real voice.