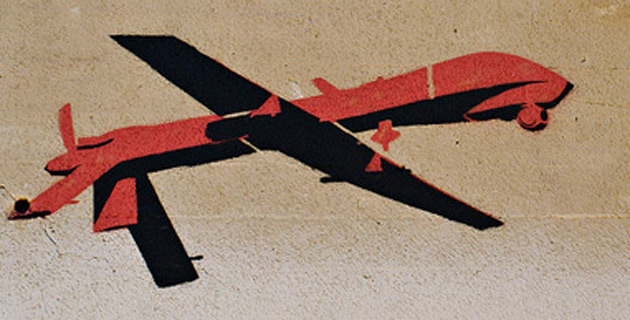 UPDATE October 22, 2013, 10:29 a.m. EDT: Amnesty International and Human Rights Watch released two separate new reports on civilian deaths in US drone strikes. Amnesty‘s report examines 45 strikes in North Waziristan in northwestern Pakistan between January 2012 and August 2013, and HRW‘s examines six examples of targeted killing in Yemen. “The drones are like the angels of death,” says Nazeer Gul, a shopkeeper in the Pakistani town of Miramshah. “Only they know when and where they will strike.”

If you’ve checked out the news these past few (or many) months, you’ve probably noticed some news about drones. Drones used by the CIA to vaporize suspected terrorists. Drones used by the United States military. Drones that deliver food. Drones used by cops. Drones possibly violating the US Constitution. Drones protecting wildlife. Drones in pop culture. Maybe this has left you with some burning questions about these increasingly prominent flying robots. Here’s an easy-to-read, nonwonky guide to them—we’ll call it Drones for Dummies.

When was the drone invented? Assuming you’re talking about the scary kinds of drones that bomb America’s suspected enemies, you’re probably thinking of the MQ-1 Predator, developed by military contractor General Atomics. This Predator drone was first introduced in 1995 as a surveillance and intelligence gathering tool, and was then tricked-out to launch weapons like hellfire missiles.

The MQ-1 Predator—used mainly by the CIA and the US Air Force—has seen action in Afghanistan, Iraq, Pakistan, Yemen, Libya, Somalia, and Bosnia and Serbia. The subsequent (and larger) incarnation of the Predator is the MQ-9 Reaper.

But hasn’t this idea been around a lot longer? Indeed, the modern military drone can be traced back to the early 20th century: ­In the­ 1930s, the British Royal Navy developed the Queen Bee, a rudimentary radio-controlled unmanned aerial vehicle (UAV) that was used for aerial target practice for British pilots. The Queen Bee could fly as fast as 100 mph; the top speed for your average modern day Predator is 135 mph.

There is even a rough historical blueprint for modern-day UAVs from the American Civil War, in which both the North and South floated balloons packed with explosives and time-sensitive triggers. The idea was for the balloons to drop into enemy depots and blow up enemy supplies and ammo. (Things didn’t go as planned: “It wasn’t terribly effective,” according to Dyke Weatherington, the man responsible for acquisition oversight of Department of Defense unmanned aircraft systems.)

Besides General Atomics, who else is in the drone business today? The usual suspects: major defense contractors including Boeing, Lockheed Martin, Northrop Grumman, and Raytheon, plus a number of smaller companies.

Who besides the US has drones for national security purposes? The following 11 governments are known to possess armed UAVs:

And according to a July 2012 report by the US Government Accountability Office, 76 countries have UAVs of some kind, up from 41 countries in 2005. Here’s a map and list from the 58-page document: 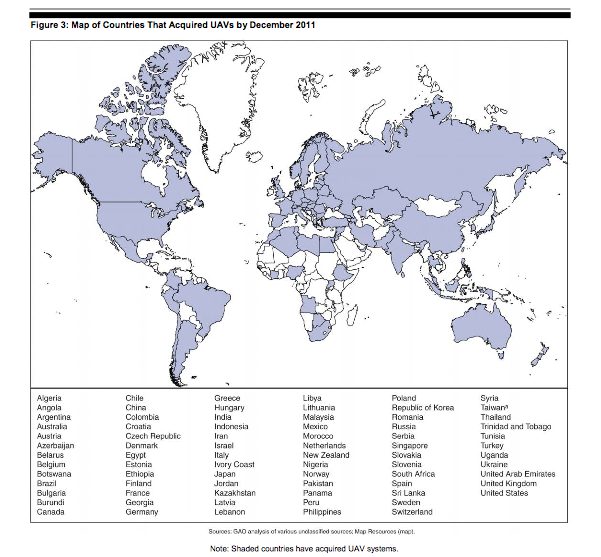 Do all military drones look like this one I’ve seen in the news? 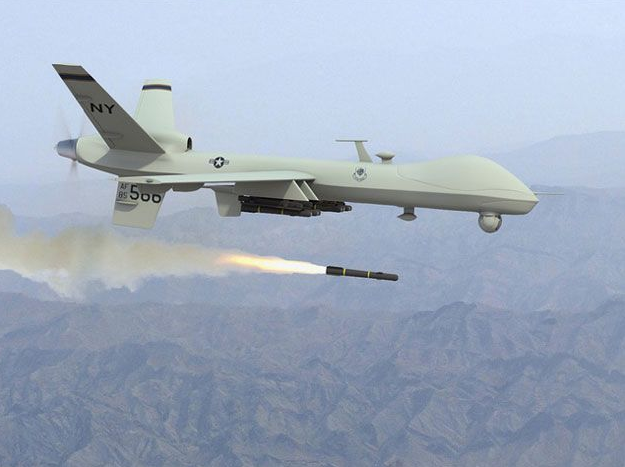 Nope. Drones used by militaries around the world come in a variety of shapes and sizes. For instance: 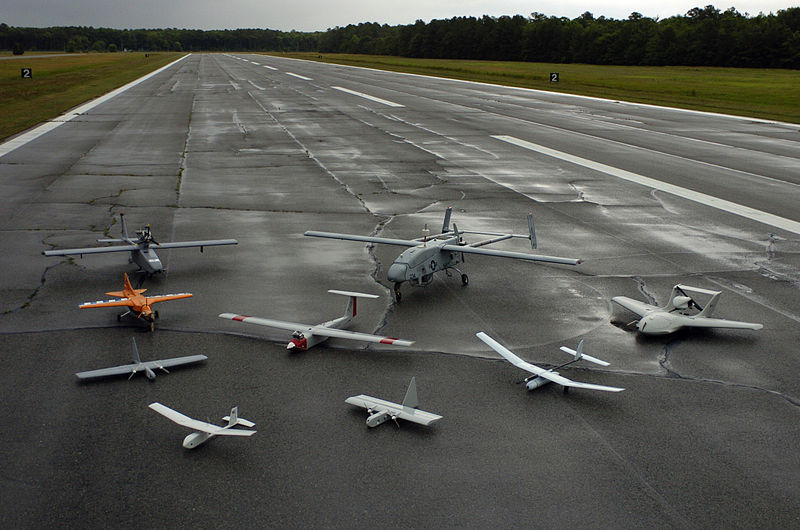 Here is another chart from the 2012 GAO report detailing the three major categories used by the US military—Mini, Tactical, and Strategic:

How long has the US been using drones as a weapon in the war against terrorism? The first known US drone strike against Al Qaeda operatives took place in Yemen on November 4, 2002. The attack, conducted by the CIA, took out a car carrying six suspected militants, including Abu Ali (a.k.a., Qaed Senyan al-Harthi), a former security guard for Osama bin Laden. Ali was wanted for playing a critical role in the October 2000 bombing of the USS Cole, which left 17 American sailors dead.

Under President Obama, the program has grown bigger and more lethal: In Pakistan alone, Obama ordered five times as many drone strikes in his first term as Bush did in eight years. Or, as Peter Bergen noted last year:

The drone campaign has since expanded significantly in the Horn of Africa, North Africa, and West Africa, where 100 American troops were sent to Niger to help establish another base for launching surveillance aircraft.

Today, nearly a third of all US warplanes is a flying robot.

Who actually pilots these unmanned robots? The CIA and Air Force both have a crew of “drone pilots.” They operate unmanned aircraft from control centers, often thousands of miles away from the location of the surveillance or targeted-killing operation. They can receive medals just like other warriors. Drone operators responsible for eliminating targets in particular are also at risk for mental-health problems such as depression, anxiety, and PTSD, at the same rate as pilots of manned aircraft flying in war zones.

Is the aggressive use of drones under Obama seriously supposed to be a “secret” at this point? Technically, yes—but it’s an open secret widely acknowledged by officials who aren’t actually supposed to be acknowledging it. Including the president himself. For instance, here is Obama acknowledging the program during a Google+ Hangout in January 2012. “It is important for everybody to understand that this thing is kept on a very tight leash,” he said:

…and here he is in 2010 threatening to take out the Jonas Brothers:

Are there maps of drone strikes I can check out? There are several interactive maps floating around the internet. Here’s a Google Map from the New America Foundation, focusing on Pakistan:

View US drone strikes in Pakistan in a larger map.

You can also check out satellite images showing locations of reported drone strikes on dronestagram. 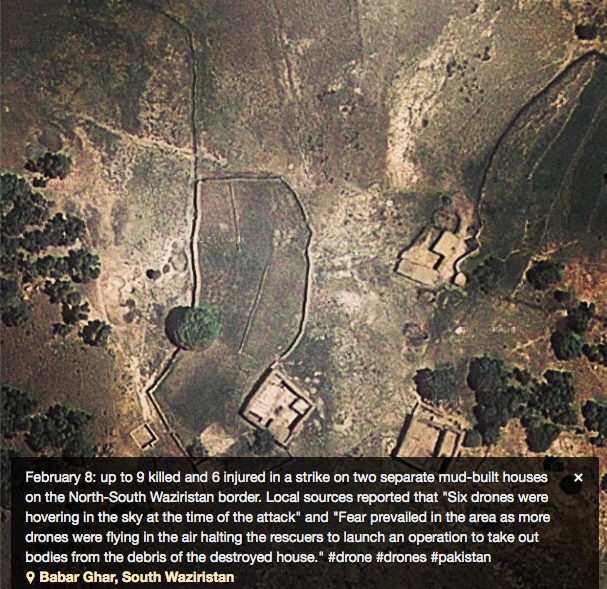 What do Al Qaeda militants do to dodge these attacks? They actually have a tip sheet on this subject. Here’s an excerpt from the AP report (filed from Mali) that broke the story:

The tips in the document range from the broad (No. 7, hide from being directly or indirectly spotted, especially at night) to the specific (No 18, formation of fake gatherings, for example by using dolls and statues placed outside false ditches to mislead the enemy). The use of the mats appears to be a West African twist on No. 3, which advises camouflaging the tops of cars and the roofs of buildings, possibly by spreading reflective glass.

While some of the tips are outdated or far-fetched, taken together, they suggest the Islamists in Mali are responding to the threat of drones with sound, common-sense advice that may help them to melt into the desert in between attacks, leaving barely a trace.

How many people have these things wiped out, exactly? Drones are central to the Obama administration’s controversial targeted killing program, but it’s tough to say how many lives they’ve taken. Estimates of the overall body count—both militants and civilians—generally hover around 3,000. (In late February, Sen. Lindsey Graham (R-S.C.) threw out another estimate of 4,700.) Best resources here: The Long War Journal, New America Foundation, and London-based Bureau of Investigative Journalism keep running tallies.

But how many civilian deaths have there really been? That’s also very tough to nail down. Estimates vary greatly: Taking just the targeted Pakistani tribal areas, some estimates give a 10-1 ratio of civilians killed for every one militant. Other estimates claim that civilians account for roughly 15 percent of the deaths. New America estimates between 261 and 305 Pakistani civilians have died, while the Bureau of Investigative Journalism gives a tally between 475 and 891.

The CIA has previously made the widely panned and laughable claim of zero civilian casualties. A ProPublica investigation demonstrates that the Obama administration’s low-ball estimates just don’t add up.

Do these strikes violate international law? Or American law, for that matter? For arguments both for and against, click here.

Is the CIA or White House allowed to conduct strikes on American citizens without due process? You’d think not—but that hasn’t stopped them: In a Department of Justice white paper obtained in early February by NBC reporter Michael Isikoff, the Obama administration provided a questionable legal justification for ordering the assassination of Americans believed to be working with Al Qaeda. The administration document argues that the secret judgment of a single “informed, high-level official” meets the demands of due process in cases of American citizens suspected of working with Al Qaeda terrorists against the United States.

This all sounds terrifying. Does this mean that all drones are potentially out to kill me? Not at all; many are completely harmless. The term “drone” encompasses a wide variety of flying, remotely controlled devices, many of which have nothing to do with death or destruction. Many are no larger than a textbook. Others are the size of small birds. For instance, the Pentagon has thrown millions of dollars into the development of hummingbird-inspired drones that could be used for surveillance, locating individuals trapped inside buildings, and detecting hazardous chemicals.

There’s also a vast array of drones that have zip to do with any military. For example, a Silicon Valley startup experimented with a “Tacocopter” drone that would work as a taco takeout delivery service. These Google-funded surveillance drones help protect rhinos and other wildlife hunted by poachers in Africa and Asia. Hollywood is lobbying the government to allow them to use drones for filming difficult shots. And here’s a longer list of drones—farming drones, hurricane-tracking drones, etc.—that aren’t out to kill you.

Indeed, there are a lot of uses for drones that aren’t designed to rain down hellfire on you. Here’s a CNN Money video on “personal drones”:

One more question: Are there books about drones written for schoolchildren? Why, yes. Yes, there are.

Here’s an example of one: 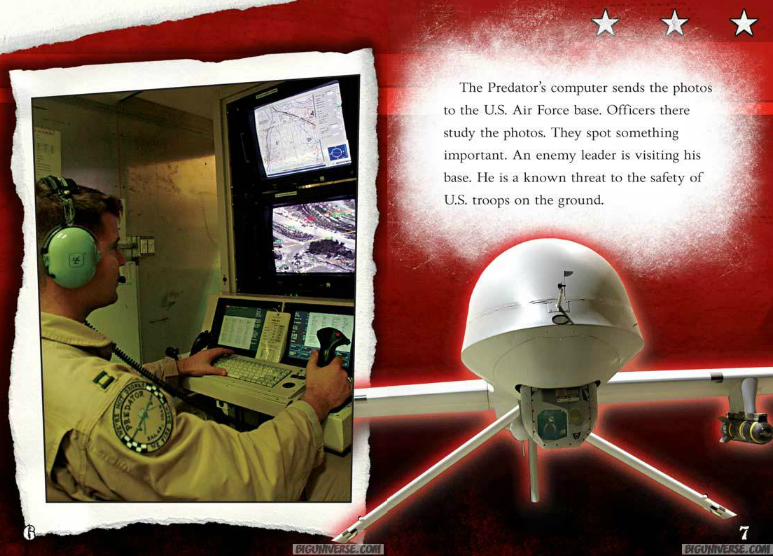 Got any other burning questions? Put them in the comments or (email or tweet me), and I’ll see if I can get to them!