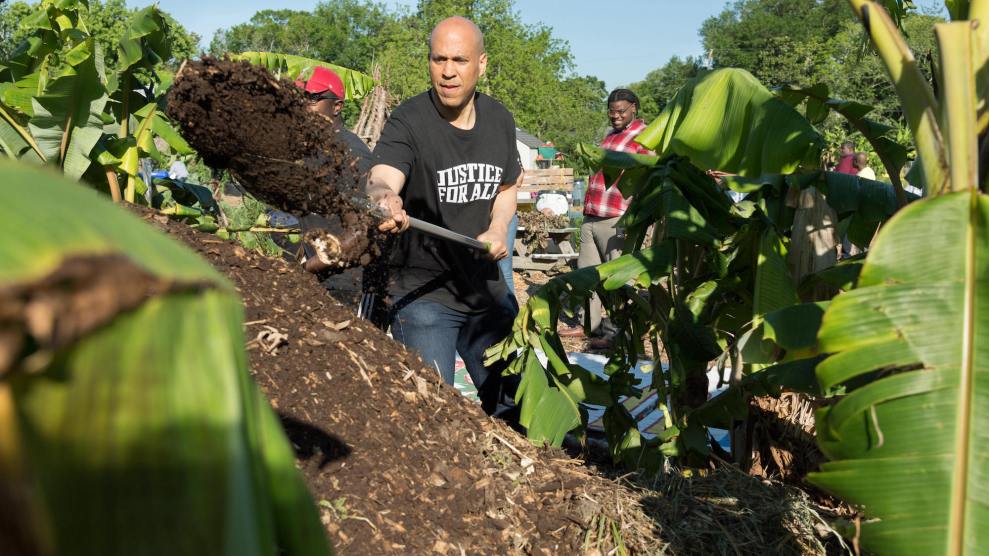 On the national stage, Sen. Cory Booker (D.-N.J.) is probably best known for his swash-buckling stint as Newark’s mayor, his unsuccessful bid for the 2020 Democratic presidential nomination, and his relationship with movie star Rosario Dawson. One aspect of his political career that doesn’t get nearly enough ink: Over the past several years, he has emerged a genuine agriculture-policy maverick—someone determined to shake up the stodgy, corporate-friendly status quo that hangs over the DC sausage factory when it comes to laws that shape our food system.

Last Friday afternoon, Booker took a breather from one of the most fraught, frenzied weeks on Capitol Hill in recent memory to chat with me for a Mother Jones live event about his journey from urban mayor to the Hill’s most prominent voice for a progressive, multi-racial version of populism in farm country. Food policy “touches on everything from climate change to rebuilding rural America to racial justice,” he argued, adding, “but it’s the area I find that leaders know the least about.” You can watch the whole conversation here:

First, I had to ask him about a couple of epic legislative battles of the moment. My colleague Nathalie Baptiste has the goods on Booker’s response to me on his recently collapsed effort to construct meaningful bi-partisan police reform. (Nathalie also has a great recent explainer on what went awry with the effort.)

I also asked him about the situation around the Democrats’ social policy and climate bill, which remains in limbo because of pushback from Booker’s colleagues Sens. Kyrsten Sinema (D.-Ariz.) and Joe Manchin (D.-W.V.). “There is common ground,” he asserted. “Sen. Sinema is with me on everything from voting rights all the way to the child tax credit. But now the rubber has to hit the road—which polices do you want in and which do you want out?”

Booker grew animated about these corporate–connected lawmakers’ complaints about the bill’s headline price-tag (as of last week): $3.5 trillion. He emphasized that with Democrats in control of the White House and both chambers of Congress—which could change after the 2022 mid-term elections—the bill represents the party’s best shot at addressing decades-long dysfunction in American life: crushing levels of student-loan debt, high healthcare costs, unaffordable childcare, and an energy system driving climate chaos. “We have a 50-50 Senate, and that means we are not going to get everything we want,” he said. “We have to find a compromise with those senators that are holding out right now.”

“There is common ground. Sen. Sinema is with me on everything from voting rights all the way to the child tax credit.“

He noted that one of the coronavirus-response bills under former President Donald Trump involved a $5 trillion total federal outlay; but the media called it a $2 trillion bill, because a combination of money-saving measures offset a chunk of the spending. “Well, by that math, this one is a zero-dollar bill, because we believe in raising taxes on corporations that [currently] pay no taxes,” Booker said.

We then turned to agriculture. I  wondered how a city guy like himself had emerged as an agriculture policy wonk. “The African-American history of my family is one of agriculture—my grandfather went to an agricultural university in Arkansas and learned farming,” he said. “And one of my most precious childhood memories is him digging up my backyard in the suburbs of New Jersey, and making the plant a garden with him, and it changed me.”

While governor of Newark, the plethora of diet-related illnesses, particularly among children, spurred him to take a close look at federal agricultural policy. Federal subsidies for crops like corn allowed giant food companies to profitably flood areas like Newark with cheap, unhealthy food. “The federal government was telling [Newark’s] children to eat healthy food, but they were doing nothing to make it accessible,” he said. “So that when children walk into a bodega, a Twinkie product is cheaper than an apple—and that Happy Meal that parents buy does not reflect the true cost to our environment to our health, to future generations.”

We then dove into the New Jersey senator’s two signature ag-related bills: one designed to redress a century of injustice that has helped push the vast majority of US Black farmers off of their land, erasing hundreds of billions of dollars in wealth; and another that would throw a wrench into the US meat industry’s exploitative business model. Booker made impassioned cases for both.

“How do we make food policy the center of the progressive agenda?”

At the end, with our time running out, Booker turned the tables and volleyed a question at me: “How do we make food policy the center of the progressive agenda?” Naming climate change, future pandemics, and racial injustice, he stressed that “anything that a progressive says they’re really worried about, I can point to it and say: We we will not solve that unless we start focusing on the American food system.” In just two years, right after the midterm elections in 2022, he added, Congress will have to renew the farm bill, the sprawling twice-a-decade legislation that governs US food and farm programs and shapes what we eat and how we grow it.

I didn’t have time to answer his question, and I’m still not sure how to. But I agree with Booker that it’s one of the biggest challenges that hangs over the nation as climate change ravages our key farming regions, diet-related illnesses proliferate, and potent, well-connected industries dig in to maintain the status quo.